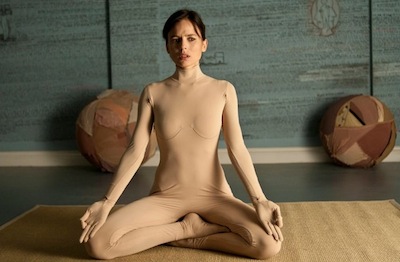 The skin we live in: the mad, bad world of Pedro Almodóvar

Spoiler alert: This article desperately avoids explicit plot spoilers but if in doubt (and keen to preserve the twists) best left until after viewing.

We staggered out of Pedro Almodóvar’s latest offering somewhat shell-shocked. There is a huge amount to get out of The Skin I Live In but goodness, is it profoundly dark. Generally well received, the film has nonetheless split critics, some seeing it as a fetishistic mess or empty stylistic exercise, others as a stunning horror of the mind. I think that your reception of the film is likely to depend on your prior relationship with Almodóvar and on how willing you are to go on this particular journey with him.

A dark alpha male Antonio Banderas plays the brooding, obsessive surgeon Robert Ledgard, bunkered in a grand Toledo mansion which offers a lush set for his initially unexplained experimentation on the beautiful captive Vera, played by the porcelain doll-like Elena Anaya. The perfection of Vera’s flawless, synthetic skin and the charged secret of her relationship with Ledgard is the central riddle of a plot that weaves back and forth between earlier stages of the narrative and gradually takes us down to depths scarcely imaginable at the outset. 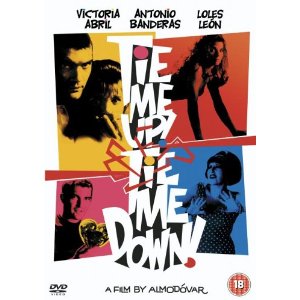 Despite not being familiar with Almodóvar’s whole canon, his 2002 Talk To Her has long been one of my favourite films. I have also enjoyed – in different ways – All About My Mother (1999), Volver (2006) and some earlier works like 1990 Tie Me Up! Tie Me Down! (his last project with Banderas before the latter’s defection to Hollywood).

One of the most striking things about The skin I live in is how it pulls together tropes and preoccupations from a number of the director’s past films – being a sort of culmination of Almodóvar’s body of work. A few of these themes were particularly resonant as the story developed.

Firstly, in Almodóvar’s world there is normally an inherent brutality to the male sexual impulse, and it is present to such an extent that I was already squirming uncomfortably within the first half an hour of the film (little was I to know what Almodóvar had in store for me yet). The representation and frequent victory of this type of male sexuality, which is oft accompanied by casual violence, suggests that it is somehow a ‘true’ manifestation of male sexuality. Together with a forceful masculine possession of the female body, his male characters often exhibit an unreflective ignorance of the coercion present in their seductions. In the three central male figures in the film we get the full bleak spectrum: the boy (Vicente), the man (Ledgard) and the animal (Veco – the ‘Tiger’). In this film Almodóvar more than insinuates the notion that heterosexual sex veers precipitously close to rape -, a particularly pessimistic and troubling theme. 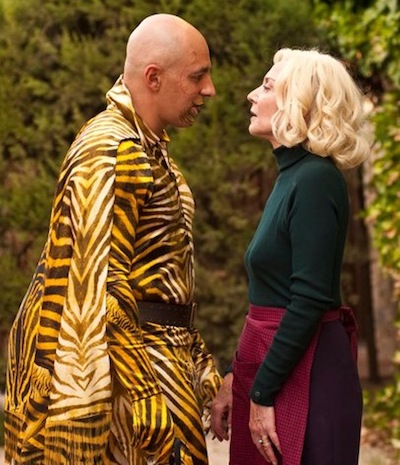 More fundamentally, though, Almodóvar’s work seems to suggest an impossibility of meaningful communication between the sexes within a certain society. This chasm between man and woman that can never be truly bridged lies at the centre of Talk To Her, where the one-sided relationship between the young coma patient Alicia and her besotted, delusional nurse Benigno is mirrored by the real relationship between Marco and injured bull-fighter Lydia. Almodóvar’s men can only ever desire, fetishise and project onto their relations with women; women, in turn, in the male gaze are literally living dolls whose internal lives may be as real as theirs, but can never be truly apprehended. Women remain, as Simone de Beauvoir suggests, men’s eternal ‘others’: an inherent mystery, in sharp distinction to the knowable Self of the male individual. This communication gap between the sexes – which after all has some undeniable, socialised roots – speaks in Almodóvar’s work in dark and sometimes terrifying tones. It presents one of the most compelling and intriguing challenges posed by his films, seemingly portraying a gender dystopia we are prompted to remain ever-vigilant against. 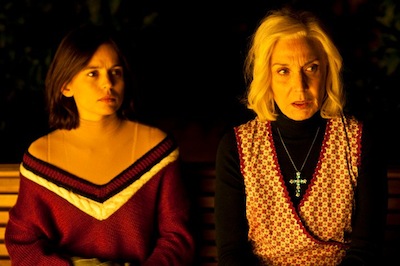 Conversely (or is it a logical consequence?) female solidarity and utterly self-sufficient women-only family is another recurring motif. This passionate, supportive unit often constitutes the moral heart of the films, but there is an underlying vibe to the female commune of being merely a flight from the hard, perhaps impossible, work of the heterosexual world. Female companionship seems to be chosen not for its own merit or joy but as an escape, a reaction against the male world. We see this in Volver, in All About My Mother and here too, in the ambiguous but positive note of the final, strangely upbeat scene and its promise of a blossoming relationship between the women present.

As if there was not enough complex and disturbing sexual politics at play, Stockholm syndrome also recurs as a theme, chiming with the broader questions of erotic power and submission. Similar to Banderas’ character in Tie Me Up! Tie Me Down! Ledgard’s relationship with Vera in The Skin hints at this captor-prisoner dynamic. With the benefit of hindsight, it is easy to believe that Vera has always only faked emotional attachment, cynically deploying her particular sexuality as a distraction. But this is not the only interpretation; some scenes remain ambivalent, offering a sense of sexual fluidity and the power of submission binding an apparent ‘victim’ to their captor. A damaged and dysfunctional intimacy between Vera and Ledgard, resulting from a shared trauma, makes it possible to imagine other outcomes than those the plot finally settles on. 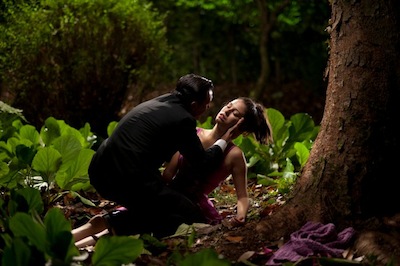 Real challenges and horrors of masculinity manifest in Robert Ledgard and are shown with a compelling mix of psychopathic cool and tightly-coiled passion. Horror amplifies with the unfolding of the story of his journey from the (relative) normality of heartbroken paterfamilias to acts of epic violation. As we walked home, my partner thought that in Ledgard we are shown the arrogant self-assurance of the privileged man: the will to power revealed in his casual assumption that by altering appearance, dominating and refining the external, he has also achieved mastery over the internal. This assumption that identity itself has been sculpted is then clear in his sincere shock when he is overthrown. I was less sure. The ambivalence of the central relationship seemed to hint at something more complex, the extent to which our external and internal are intertwined.

Norma claws with discomfort at her evening dress and heels – the everyday uniforms we are made to, perhaps reluctantly at first, internalise and embrace

Identity – its mutability or essence – is certainly at the core of the film, principally in terms of gender, though there are much wider themes around dominance/submission and grief/vengeance at play. The fundamental ambiguity of gender and sexual identity in Almodóvar’s films – from Lola in All About My Mother to the androgynous strength of Lydia’s bull-fighter in Talk To Her – is the more marked for its location within a macho Iberian world. This fluidity comes to a climax in The Skin I Live In through a broader theme of how we are educated into our genders. Our being shoehorned into masculinity/femininity is shown monstrously for what it is: the coercive process by which, as de Beauvoir famously noticed, “one is not born, but rather becomes, a woman.”

Ledgard’s traumatised and broken daughter Norma (Blanca Suárez) shows us this in everyday guise. Seeing her institutionalised, incoherent and identifying him with the violent, appropriating masculinity she has been subjected to, her father asks doctors why they can’t at least get her out of her hospital gown and into ‘normal’ clothes. But then we are reminded of an earlier scene, where Norma claws with discomfort at her evening dress and heels – the everyday uniforms we are made to, perhaps reluctantly at first, internalise and embrace. We are also reminded of Vera violently rejecting the dresses she is offered and appropriating them for her art. It is Norma who is our savant in this dark world – with her howling rejection of the ‘natural’ sexual order and the terror of her father.

It is also her refusal to submit willingly to coercive male sexuality that fully unveils the potential of rape inherent in Almodóvar’s troubling heterosexual relationships. As a viewer, I found myself feeling as nauseated and uncomfortable by the ostensibly consensual sex scenes of the film as in the scenes of explicit force. I suspect this is because the coercion is implied just as viscerally in the former exchanges: what stands between the ordinary sex act (if such a thing exists) and the gruesome violence of ‘the Tiger’ is simply a negative female consent which is purely nominal, even tactical. The Tiger’s fairytale villain – a caricatured barbarian of masculinity – lends himself primarily as a foil to the complexity of Ledgard. His grotesque cartoon violence acquires extra horror for the viewer later in the film, challenging us to think about how much we culturally accept male-on-female violence as a ‘natural’ expression of sexuality.

On the other hand, the fact that the consensual sex in the film remains ultimately unconsummated reasserts the imperfect cruelties and unfinished nature of the gendering process. We are taught what it is to be a ‘real’ woman/man, what this requires of us, what appropriations we are to inflict on our own bodies and those we are to expect and accept from others. Still this naturalising process appears anything but natural; it is rarely, if ever, fully accepted while its structures are experienced more brutally by some than others. While Norma runs screaming – retreating in horror to her interior world – Vera absorbs, subverts, survives. The choices appear bleak indeed. 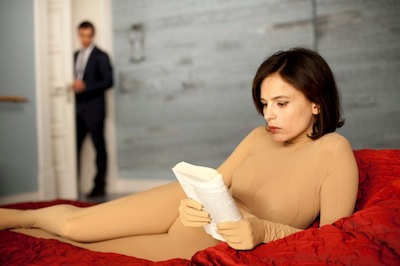 And yet the film is not itself ‘bleak’. On the contrary, it is lush and sensuous, beautifully woven across picture and score. Somehow none of this felt to me like the fetishising of sexual violence or the female body, even as the female form is atomised. Vera’s skin, her blood, all is lingeringly and sensually shot. But this may be Almodóvar’s gift: the fetish appears via the eyes of the male leads as his direction implies the masculine gaze and its feminine internalisation. In Talk To Her we explore Alicia’s body with Benigno, whose fantastical obsession cannot even perceive the need for a woman to be present in order for a relationship to flourish. In The Skin I Live In we watch Vera literally through Ledgard’s eyes, while he observes her on the screen, fighting his desire, and on the table in his operating theatre. But beyond the screen, beyond the gaze, these women become themselves once more: Vera athletic and creative in her isolation, Alicia dancing.

So while the film left me pretty spooked and extremely preoccupied, I cannot share the concerns some have voiced of its depiction of women as abject, “comatose or mentally ill constructs to be sewn, screwed, sedated or silenced” and even less those of style over substance, “a tissue of surfaces, styles and images”.

It is, rather, a dense, creative and beautiful horror film – a grotesque fairytale of men and women, identity and power, desire and intellect. That said, watched in the same week as the far more downbeat but unremittingly grim Drive, it did feel wise to promise myself the chirpy vacuity of an SJP romp next time round…

Mhairi Guild is a lefty dreamer in arrested development who works in charity research. She loves Camus and Greer on her bookshelf, pineapple on her pizza and tries with varying success to cultivate a well-stocked wine rack; she lives in London with her lovely, long-suffering partner