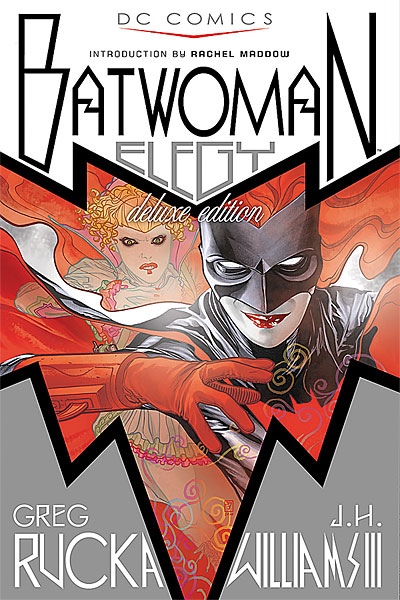 In Gotham City, a new caped crusader is prowling the rooftops; a woman in black and red, falling hard on the followers of the Religion of Crime, and looking for information about their new leader. She is Batwoman. Her name is Kate Kane, she is an officer and a lesbian, and the devotees of this religion stabbed her through the heart a few months ago. I knew going into this story that it was going to be good. Nothing prepared me for quite how good.

Batwoman: Elegy by Greg Rucka and J.H. Williams III is the first collected trade volume featuring her as the main character. Rucka is the acclaimed writer of the Queen and Country espionage series, and has a long history of writing Batman. He’s a character writer, with a proven track record of great female characters, including Tara Chace, the protagonist of Queen and Country. The artist, J. H. Williams III, had been deservedly lauded for his excellent work on Alan Moore’s Promethea.

I knew going into this story that it was going to be good. Nothing prepared me for quite how good

Elegy is a story in two parts; the first, Elegy, is set in the ‘present day’ and tells of Batwoman’s encounter with the new head of the Religion of Crime, a Lewis Carroll-inspired character named Alice. While it follows on from previous stories told in DC’s Fifty Two, previous knowledge of these events is not at all required to follow the story. The actual events are used as a hook on which to hang understanding of Kate and how she operates, and to showcase Williams’s superb art.

Kate Kane, we learn, is a rich débutante living in Gotham City, where she is supported, in both her regular life and her mission as Batwoman, by her father Jacob Kane, a colonel in the US Army. She’s headstrong, brazen and unapologetic in every aspect of her life, and revels in showing up her significantly more conservative stepmother. While it would have been nice to see a stepmother character who isn’t an unlikeable antagonist, one rather gets the impression that this picture of her might be coloured by Kate’s point of view.

After the first storyline’s climax, the plot shifts, and starts to unfold Kate’s origins as Batwoman through a series of flashbacks. This section of the book includes a powerful and moving coming-out scene, which exemplifies Rucka’s immense power in simple, defining character. In her senior year at the United States Military Academy, hoping to follow in the footsteps of both her parents, Kate is brought up in front of her superior officer on suspicion of violation article 125 of the Uniform Code of Military Justice – “Don’t Ask, Don’t Tell” to the rest of us. Kate stands to attention and quotes West Point’s honour code directly at him: “A cadet shall not lie, cheat, or steal, nor suffer others to do so.”

Her father understands Kate and supports her, without pushing her too far or holding her back in any way

And with that, she’s out of the army – but that’s not the coming-out scene that’s the most moving. That comes on Kate’s return, standing in front of her father, explaining why she’s been ejected from the military.

That father daughter relationship is one of the highlights of the series. Jacob Kane is taciturn, no-frills, and completely devoted to his daughter. He’s flawed, of course, and has some devastating mistakes in his past, but he understands Kate and supports her, without pushing her too far or holding her back in any way. She doesn’t have many close ties, as Kate or as Batwoman, but her relationship with her father is a constant throughout.

But as good as Rucka’s writing is, it’s William’ art that really makes the book. He mixes two drawing styles in the book to great effect: when Kate is being Kate, and living a life fraught with dating issues, a concerned father and a snide stepmother, it looks like a comic book – simple bold lines, easy to read expressions, and traditional boxed panels. When she’s in costume though, the panels break out into stylised, irregular and sometimes bat shaped page layouts, and the art becomes realistic and rich with detail. It sounds like hyperbole to call this the best art in a superhero comic I’ve ever seen, but it really is a contender.

This is an example of what superhero stories are at their best: stories of outstanding, brave people who put on a mask and cape because that’s the way they find to serve humanity

Kate’s inspirational encounter with Batman is a great example of where these two styles – where Kate’s two worlds – meet. Having fought off and defeated a would-be mugger, Kate is interrupted by the arrival of Batman, the surprise of which knocks the over excited ex-soldier to the ground. Then, without a word, he offers her a hand up. Williams renders the leather of Batman’s glove in hyper realistic, almost photographic detail, into which is placed Kate’s bold, flat, comic book hand. In one panel we’re shown the contrast between the complex, alive world of the superhero, and the relatively simple, flat yet far more relatable world without the mask. In one panel, without even showing any faces, Williams shows Kate’s decision to become a superhero.

If you’ve never read a comic before, then Williams’ complex and unconventional layouts may make it difficult to follow, but don’t let that deter you from this example of what superhero stories are at their best: stories of outstanding, brave people who put on a mask and cape because that’s the way they find to serve humanity. If you’re already a fan of superhero comics, then I shouldn’t need to tell you how great this book is, because you already know.

Batwoman: Elegy is available in a paperback as well as a deluxe hardback edition, the latter including concept artwork and script pages in the bonus features. Kate Kane herself appears in the monthly Batwoman comic by DC, which should still be available in your local comic shop.

Debi Linton is a displaced Londoner currently living in New York, where she’s undergoing the process of metamorphosis from a palaeontologist to an educator. In her spare time, she likes reading about women who fight.