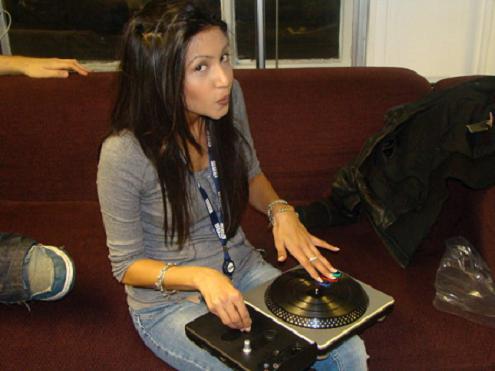 There is no set theme as such to this particular paste up, its mainly that I’ve been thinking a lot about the music we’ve covered these past six months or so on The F-Word, and my mind has been boggling about how we’ve managed to recruit such a fantastic group of writers who have written such excellent reviews. A big thank you to you all.

I was a bit nervous about what I was getting myself into when I was accepted as one of the two music review editors, and whilst I’ve found it a bit fraught at times, it has been a series of very interesting encounters and experiences, and I hope that will continue.

To kick things off this time, here is a Dear Reader aka Cheri MacNeil, with an acoustic version of her new single ‘Monkey’ (Go home now), which is released on 23 January. You will be hearing more of Cheri on The F-Word in the near future.

A year or two back someone mentioned the band Pettybone to me as an example of post riot grrrl punkiness. Whilst being intrigued, I didn’t hear anything more about the band until I spotted this interview piece with the band over on Wears The Trousers… Natalie Dzerins, who is guest blogging for us this month, rates them as well and I await further developments with interest.

Following our recent review of St Vincent’s Strange Mercy I’ve been watching this clip of Annie Clark performing the poignant ‘Cheerleader’ on Conan O’Brien’s show in the US, and enjoying it very much.

I have also been enjoying this video by Arcade Fire

Whilst awaiting the new Chairlift album Something, which is out on 24 January. This single served as a taster when it was released last year.

Other things I’ve been thinking about these past few weeks have been the many genres of music we’ve yet to cover on The F-Word. We haven’t done much on the various genres and sub genres that loosely make up what is lazily dubbed dance music for example, we haven’t done much on opera or classical music, on R’n’B, or… on metal. I wasn’t actually looking specifically for a site on feminism and metal, but chance searching one night has introduced me to feministheadbanger, and I shall be keeping an eye on it.

Another area we haven’t even touched on is the (again, lazily dubbed) Asian music scene, and it was nice, after a certain amount of tentative coverage of the Asian Music Awards last year to stumble across the piece on women in the Asian music scene. As the piece points out, many of these women are unsigned or have set up their own companies, and “a diamond isn’t a diamond unless it’s been mined!” Quite.

This video is a few years old now, but I still like it.

Are there any genre’s of music you’d like to see us write about on the F-Word? Is there a really great artist you’d like to see us cover? Or do you know someone who knows all there is to know about dubstep, grime, R’n’b, desi or soul? Are you a feminist you likes metal? Please do get in touch.

Image of DJ Kayper from the BBC Asian Network website