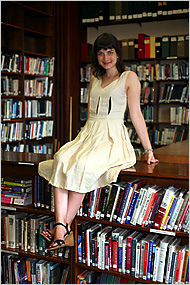 Are libraries a feminist issue?

Are libraries a feminist issue?

This is a question that I have been thinking about in the last few weeks. I am due to do a talk at the Victoria Baths Fanzine Convention in Manchester a week on Saturday, and this is one of the tangents I seem to have gone off on while pondering the wider area of women, fanzines, punk, riot grrrl and feminism. There are a lot of zines and websites about libraries, and they are frequently written by women.

I don’t have any stats to back it up, but its been my experience that the libraries I’ve worked at here in the UK have all been female dominated. Some more blatently so than others, but as a rule I’d say at least 70% female, and in some very small libraries, 99%-100% female. Libraries are classed as being in the public sector by the way, and in the UK we have two women’s libraries, one in London, one in Glasgow. They aren’t related to each other, they just happen to both be called The Women’s Library.

In mid March London Metropolitan University, who are responsible for the Women’s Library in London, announced that they will be seeking a new home, custodian or sponser for the Women’s Library collections. If a new home cannot be found by the end of December 2012, the Library will move to opening hours of one day per week for a period of three years, with a further review at the end of that period.

You can read the full announcement from London Metropolitan University here

and The Guardian have also been covering the story.

I don’t live in London, but I’ve used the Women’s Library for research on many occasions now. I’ve found the staff to be approachable and friendly, and the reading room is accessible both in the physical sense but also in the sense that accessing it doesn’t involve masses of layers of bureaucracy. There doesn’t appear to be a criteria you have to satisfy to access the collection, you don’t have to apply months in advance, and as long as you abide by the reading room rules (which are sensible) then you can use the collection. Without the Women’s Library both the punk women series and the Shocking Pink piece would both have had substantial holes in them.

But don’t just take my word for it, read the save the women’s library blog. There you will find good information about the library, and why the library deserves to be saved.

Libraries are not just places to go when the weathers cold, when you want to borrow a DVD, when you want to apply for a job online, they are also archives. They store things. The Women’s Library in London stores women’s history, and if it goes, so will a lot of that history.

On a similar theme of libraries suddenly looking financially vulnerable, the Working Class Movement Library in Salford, which includes an impressive archive of feminist pamphlets, journals, ephemera and publications within its collections, announced a massive fundraising drive late last year following funding cuts from Salford Council. Salford is a Labour council and, as such, has been especially hard hit by local government spending cuts.

As with the Women’s Library in London, I’ve used the WCML to research women and punk. The two collections are very different in many ways, but there is occasional overlap: Both have the entire run of Spare Rib for example. But if you wanted to research Margaret Ashton, suffragist, pacifist and first female city councillor in Manchester, then the WCML would probably be a key stop on your research journey.

“We are recognised at home and abroad as one of Britain’s most important collections of working class history. We are open for everyone to use without charge. The breadth and depth of the archives, books and artefacts makes the Library a vast and unique collection, capturing the stories and struggles of ordinary people’s efforts to improve their world. Tony Benn has called us ‘one of the greatest educational institutions in Britain’.”

“Our founders Ruth and Eddie Frow started the Library in their own home, driven by the belief that working people should remember and value their own history. Together they rescued countless items which would have otherwise been lost to the future. In these turbulent times that history has never been more relevant – and the survival of the Library will depend on the generosity of our supporters.”

In the US, there is a wikispace devoted to women in libraries, which describes itself as being somewhere writers can review “books, films and other publications of interest to the feminist library community”

Do we have a feminist library community in the UK? certainly I know feminists who work in libraries and, while I’ll accept that there’s an informal network of librarians and library assistants in the Greater Manchester area who are of a similar mindset, social group, have similar politics and tastes in music, I’m not aware of a specific network of feminist librarians in the vicinity. Modernists, certainly, emos and goths most definitely, and in many ways we are all Warrior Librarians and often a bit Unshelved as well, though – again – both US sites. Some things are universal though…

Picture of a woman sitting on top of a bookcase, entitled ‘Hipster Librarian’, by Super Furry Librarian. Used via a flickr creative commons licence