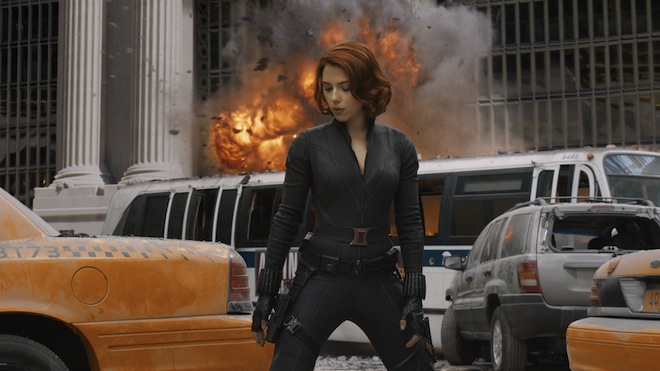 I could not heart Joss Whedon more. I have a Buffy the Vampire Slayer shrine above my desk, shoehorned Buffy footnotes into my PhD (which I celebrated defending by going to see Serenity, Whedon’s film sequel to his short-lived and much-loved TV series Firefly) and own both – yes, both – seasons of Dollhouse on DVD, even though I thought it was occasionally borderline sexist and racist crap.

Love makes room for caveats, so I was prepared to be generous when I saw the first trailer for Avengers Assemble, Whedon’s second outing at the helm of a Hollywood movie… in which Black Widow, the only apparent female character, didn’t have a single line.

She did have a slinky catsuit and a powerful fighting style, but nothing to say amid the testosterone wrestling that was (I suppose) inevitable when a film brings together the Hulk, Iron Man, Thor, Captain America and Nick Fury, all well-pec’d chest-thumping species of hyper-hetero-masculinity.

Some would say: the time has come to grow up and stop watching movies about superheroes, vampires and other mutants. But… full disclosure: I once contributed to a book called Girls Who Bite Back: Witches, Slayers, Mutants and Freaks and, as a genderqueer feminist, I have always identified with the freak side of the superhero/supernatural. Plus: if anyone could show that superhero stories are bound up with big issues of difference, dis/ability, and international politics (no pressure there), it was going to be Whedon. Right?

With riffs on the need for sustainable energy, minimising interventionist US politics, weapon non-proliferation and the underlying argument that violence begets violence, there’s no doubt that Avengers is going to piss off all the right people

Rightwing racists have already called “race-lifting” over the casting of Samuel L. Jackson, even though commander Nick Fury has been black in the Avengers comics for years. Jackson is brilliant and his wily politicking subverts the new science fiction TV trope of the black male president/army general (Doctor Who is a particular offender here): deep-voiced, authoritative, solid – and always on the wrong side.

These days, you can tell whether to like a mainstream film by the people it pisses off.

With riffs on the need for sustainable energy, minimising interventionist US politics (and avoiding human casualties), weapon non-proliferation and the underlying argument that violence begets violence, there’s no doubt that Avengers is going to piss off all the right people.

Luckily, in the second trailer, Black Widow not only had dialogue, but was positioned as the ethical centre of the film (as well as a kickass fighter). The redistribution of focus encouraged us to look askance at hero-in-his-own-head Tony Stark/Iron Man. Robert Downey Jr has maintained in interviews that he and Iron Man are the star of the film – but the film itself doesn’t play it that way, making it very clear that it is Stark’s endless cock-measuring (figuratively, the film is rated 12A) that threatens the whole enterprise.

To be fair, Downey Jr. plays Stark (knowingly, in this film) as a huge cock: he first appears completing an enormous tower he’s built in Manhattan, and ends up hugging a nuclear missile – these are phallic in-jokes on his heroic portrayal in previous films. That’s underlined by the subtly sarcastic way in which his girlfriend Pepper Potts manages his emotional limitations while getting turned on by their equality of intelligence.

There’s no planeloads of nubile girls attending Stark’s every whim here (unlike in Iron Man) and the film actually asks him to do some – limited – growing up. Most importantly, he and Dr. Bruce Banner (the Hulk) ride off into the sunset together: you can hear the Concerned Christians of America collectively tutting, even over the ear-bleeding Skywalker Sound that drowns every scene…

Black Widow’s backstory is completely unnecessary to the functioning of the overall plot, in which she could have been written as sexy superspy Smurfette, but Whedon makes her character arc, and not just her mid-cleavage zipper, central

Whedon has an ear for the way masculinity has to hype itself under patriarchy, as well as the implicit edge of homoeroticism/homophobia. All of which was borne out in the film, with added shading via the subtle characterisation of the Hulk. 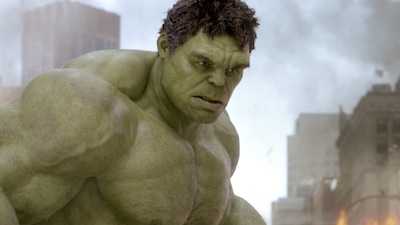 Iron Man, Thor and Captain America have all had solo outings in this round of Marvel screen adaptations, and have established characters, but the Hulk comes fresh to Avengers.

Casting Mark Ruffalo – the epitome of the macho man-child – is a stroke of genius, and the Hulk is written as an ‘every(new)man’, struggling with a social order that both expects him to be gentle and places a premium on mindless violence in response to threat. On the one hand, Ruffalo’s nuanced performance brings psychological complexity to superhero behaviour (is mindless rage really such a great defence system, America?); on the other, his timing allows his predicament to be played with (rather than for) laughs, particularly when engaged in one-down-man-ship over science and violence with Stark.

Far from the ‘Hulk smash’ paradigm beloved of most mainstream blockbusters, the film is smart enough to make witty mileage out of the ridiculous conceit of the lycra-clad, portentous-utterance-issuing superbeings and their heroic deeds. 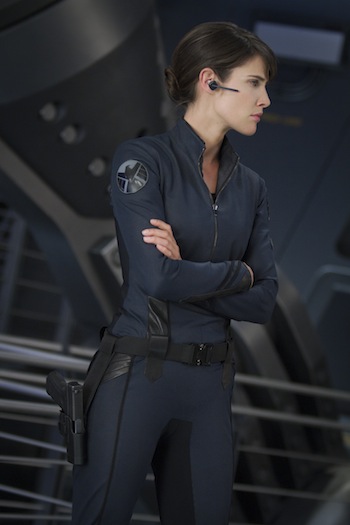 What this film can’t quite do is pass the Bechdel Test: there are three female characters, but they never get the opportunity to talk to one another. Whedon does his best to make Pepper Potts (Gwyneth Paltrow), Stark’s girlfriend, into a Willow Rosenberg-like hot geek in her one-and-a-half scenes, while Agent Maria Hill (Cobie Smulders, right), Fury’s second-in-command, and Black Widow, aka Agent Natasha Romanoff, both act as ethical checks on the smash-and-grab supermen.

But Potts and Hill are sidekicks at best; on the other hand, neither of them is sacrificed to win audience sympathy, and they both wear clothes at all times (if not shoes, in Potts’ case: Whedon is open on the DVD extras for his series Firefly about his foot fetishism, which is endearing. To me, anyway). So points for that.

Although the range of feminine subject positions on show isn’t that great (hot, capable, ethical helpers), what the film has to say about hyper-masculinity is

Black Widow’s character is more complicated and Scarlett Johansson does an excellent job of bringing her complexities to life.

Like the male superheroes, she has a dual identity produced by a dark and traumatic past: in her case, childhood programming to become a superspy for the USSR. Her relationship to her past – and to Hawkeye (Agent Barton), the S.H.I.E.L.D. agent who saved, rather than assassinated, her – emerges through two beautifully-written conversations. 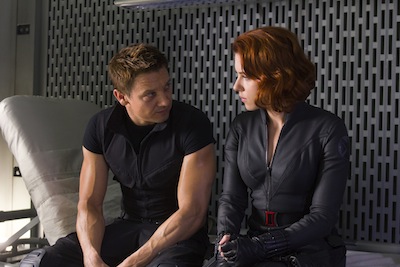 Both are with a male character and take place on either side of the central macho-action-mayhem sequence, in which she has two crucial, and stunningly choreographed, fights.

Her backstory is completely unnecessary to the functioning of the overall plot, in which she could have been written as sexy superspy Smurfette, but Whedon makes her character arc, not just her skills and mid-cleavage zipper, central.

Which makes me wonder: do we need a new Bechdel test? One that looks at what a mainstream film might be saying, obviously always within the constraints of its source material and genre, about gender identity and relations, about race and politics, about dis/ability and vulnerability?

There was always a Bechdel exception for films about exclusively male groups or worlds (such as Tarantino’s Reservoir Dogs), but superhero movies – both in characters and audiences – are no longer male-exclusive, if they ever were.

Whedon’s Pepper Potts is a step away from Lois Lane, and Black Widow’s no fembot – equally, they’re not quite Willow and Faith. The range of feminine subject positions on show in Avengers isn’t that great (hot, capable, ethical helpers) but what the film has to say about hyper-masculinity is. Which leaves me saying (as ever with pop culture): “Two cheers.”

And maybe if Avengers Hulk-smashes some box office, the powers that be will relent and let Whedon make his Wonder Woman. There’d be four cheers for that.

Sophie Mayer is currently writing about Buffy the Vampire Slayer and the Occupy movement for the Morning Star, which fulfils all her dreams in one fell swoop