The story goes that it was Derek Jarman who opened Joanna Hogg’s door into filmmaking.

In 1980, 18 year old Hogg started working as a photographer’s assistant in Soho, building up her portfolio and earning her keep by photographing actors for Spotlight. Around that time, she discovered Derek Jarman’s super 8 films and they made such a big impression on her that one day, in Soho’s Patisserie Valerie, she asked him if she could work with him. He told her to come by his studio with her portfolio and, seeing a talent, gave her his Nizo super 8 camera and introduced her to a couple of people.

Where had she been all these years? Right where she was meant to be: living and working in London, thinking, storing ideas, painting and waiting until the time felt right for her to leave television and make her first feature film

She shot her first super 8 film Paper for her entry into the National Film and Television School aged 22. After spending three unfulfilling years there – her graduation film about a woman’s obsession with a fashion magazine, starring a then unknown Tilda Swinton, was deemed too ‘frivolous’ – Hogg left feeling burned. She went on to shoot pop promos for the likes of Alison Moyet and Johnny Thunders and then for the next 10 years became a jobbing television director on TV soaps like Casualty(1996-98) and EastEnders‘ spin-off Dot’s Story (2003).

Cut to 2007 and Hogg’s debut film Unrelated premieres at the London Film Festival, winning the influential FIPRESCI (The International Federation of Film Critics) award. Roger Clarke from The Independent writes back then that Hogg “had such a remarkable beginning to her career that it makes you wonder where she has been all these years”. 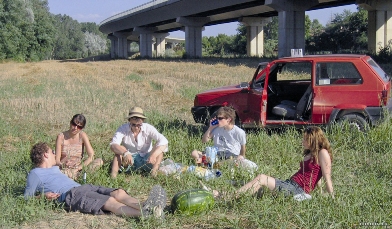 Where had she been? She had been right where she was meant to be: living and working in London, thinking, storing ideas, painting and waiting until the time felt right for her to leave television and make her first feature film. Hogg’s father’s death in 2003 and her decision to try for a family prompted the story in Unrelated. She made her second, equally impressive film Archipelago in 2010 and again critics lauded her singular choice of subject matter (upper-middle class angst) and aesthetic style (comparable to Eric Rohmer’s) as distinctively ‘un-British’, eschewing the working-class realism of Lynne Ramsay and Andrea Arnold. All three directors had their films featured in BFI Southbank’s recent, though long overdue, celebration of British women filmmakers season ‘Made in Britain’ (other filmmakers included Carol Morley, Clio Barnard and Lucy Walker). Significantly, there was a noted absence of queer and women of colour filmmakers: what about Pratibha Parmar, Campbell X or Lisa Gornick? [Editor’s note: Sophie Mayer blogged about this imbalance here last month]

Hogg’s films bite because ostensibly they deal with class: not just middle-England class but upper-middle class (the Tory ruling class). However, as much as they clearly focus on this particular social landscape, the themes that Hogg highlights are taken from the everyday: family, relationships and how we negotiate them.

How many other contemporary films are there that address these issues that are very real for many women, whatever their class background?

In Unrelated, 40-something Anna’s (Kathryn Worth) marriage is in trouble. She accepts an invitation to spend the summer with her old school friend Verena (Mary Roscoe) at their holiday villa in Tuscany. Long lunches, day trips to Siena, nocturnal drinking and skinny dips are the order of the day. However, Anna soon finds herself inclined to hang out with the family teenagers more than the ‘olds’. In particular, Verena’s cocky nephew Oakley (Tom Hiddleston’s first film acting role) catches her eye and the pair begin an intense flirtation.

Anna slowly starts to unravel and at the end of the holiday, she reveals to Verena her distress at being told that she is not able to have a child. Hogg’s portrait of an older (childless) woman, confused about her relationship and behaving inappropriately towards a teenage boy is pointed and original. How many other contemporary films are there that address these issues that are very real for many women, whatever their class background? Arguably, not since Carine Adler’s short film Fever (1994), starring Katrin Cartlidge, has there been a female lead role quite so complicated and unusual. 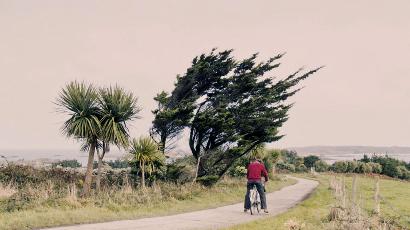 Tom Hiddleston links both Hogg’s films. In Archipelago, he plays a reverse role, namely a passive, indecisive, wet young man called Edward. Once again, the film takes place on a family holiday, this time in the Scilly Isles. Edward’s recent decision to quit his city job and go travelling in Africa for a year has prompted him to join his controlling sister Cynthia (excellently played by Lydia Leonard) and passive, long suffering mother (Kate Fahy), while the father remains literally and metaphorically absent throughout the film. Together with the holiday cook Rose (played by real life cook Amy Lloyd) and artist Christopher (played by Hogg’s actual painting teacher Christopher Baker), this nervy uncomfortable constellation spends their days painting, picnicking and sitting down for strained family meals as they await the arrival of the father. Once again, Hogg chooses to develop an unlikely attraction to upset the social order, this time between Edward and Rose: their erotic chat about boiling lobsters is one memorable scene. Rose’s position as servant in the house is subtly turned over as her friendship with Edward develops, much to Cynthia’s disgust (“You don’t have to make friends with the cook,” she points out). The family’s attitude to class and position is ruthlessly revealed.

Hogg’s mixed use of professional and non-professional actors plays off well as she manages to extract very naturalistic performances from the cast. Interestingly – and going against the predominant hierarchical working method of many male filmmakers – she makes sure the cast and crew live, eat and work together. Furthermore, she shoots the scenes in chronological order, which allows the actors to have a continuum, making the psychodrama more real and intense. She talks about a “grey area between real life and the story in the film”.

The aesthetic choices she makes as a filmmaker are distinctly European and her films are comprised of long shots, slow editing, sparse dialogue and no music. There are only a few moments in Unrelated when she uses the close-up in order to intensify Oakley’s anger directed at Anna.

Joanna Hogg’s next film will be set in London and right now she is painting the film’s structure and ideas. Martin Scorsese has compared Archipelago to Powell and Pressburger’s classic drama A Canterbury Tale (1944) for its rooted sense of English landscape and cultural place within. With that in mind, Hogg’s cultural filmmaking roots can be linked to Derek Jarman, Chris Petit and Patrick Keiller rather than the heritage cinema of Chariots of Fire or Notting Hill. She keeps good company and, significantly, is the only woman in this grouping.

Keeping creative control of her filmmaking is of vital importance. Both films have been funded independently, on small budgets (“so there are less people to tell me what to do”, she says). This is striking because a good majority of British films shot in the UK have come out of the Film Council’s sausage factory; true independent cinema is a rare beast.

By keeping her autonomy, Hogg has had the courage to deliver a follow-up film very similar to her first: both are stories about an unbalanced family on holiday. British directors like to reinvent themselves every time and the challenge of re-addressing similar themes is more in line with our European cousins; Michael Haneke and Eric Rohmer again come to mind.

Even though Hogg has yet to go on record to call herself a feminist filmmaker, I would argue that her filmmaking already is.

Her films represent a challenge to the dominant patriarchal order for the very reason that she writes complex roles for women (and men) with subversive originality. She creates roles for anti-heroines and anti-heroes; she seeks out the grey thorny areas of living and the negative spaces in people’s lives. Her creative process is by its nature collaborative, encouraging improvisation and the freedom to evolve. No macho power games there. She is a 40+ woman who knows what films she wants to make and how to make them. These days, not a lot of people can say that and actually do it.

Selina Robertson gives three cheers to BFI Southbank for finally turning the spotlight on some British female directors and three raspberries to Cannes who have failed to include one single female director in this year’s competition. She is avidly following La Barbe, a French feminist direct action group, who are publicly protesting this decision. Vive La Barbe!