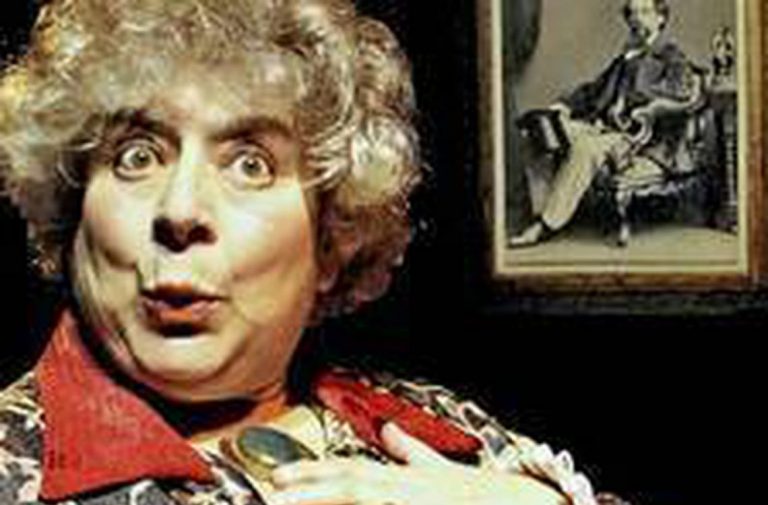 Miriam Margolyes has brought her remarkable solo show Dickens’ Women back to London to mark the 200 years since the birth of the novelist. At the UK premier in North London’s Arts Depot, Margolyes had the audience laughing from the moment she entered the stage as Mrs Gamp from Martin Chuzzlewit.

Margolyes conveys the story of Dickens’ life through the female characters in his novels – the play is more about Dickens than the fictional female characters, who were often caricatures modelled on real women in his life. Of the over 2,000 characters created by Dickens, Margolyes takes on 23 characters, from the familiar, such as Nell and Miss Havisham, to less well-known ones like Miss Mowcher, a dwarf hairdresser and manicurist from David Copperfield.

Margolyes brings all of these characters to life with humour and passion, leaving no doubt that she is an extraordinary character actor. The impersonations flow effortlessly alongside the story of Dickens’ life as told by Margolyes, so even audience members with little or no knowledge of Dickens are sure to follow.

After 22 years of marriage, Dickens threw his wife Catherine out of their home, humiliated her with public letters declaring her a bad mother and a wife and forbidding her from seeing their children

The play is very much a one-woman tour de force; created in 1989 by Margolyes and Sonia Fraser the play has toured around the world unaltered ever since, performed by Margolyes and directed by Fraser. The staging is very minimal but with inventive lighting and subtle piano music playing in the background, the story moves from comedy to tragic scenes seamlessly.

Dickens was the most popular writer of his era and he was a respected and influential social critic . However, Margolyes talks of him as a deeply tormented man who did not hold women, least of all his wife, in high regard. After 22 years of marriage, Dickens threw his wife Catherine out of their home, humiliated her with public letters declaring her a bad mother and a wife and forbidding her from seeing their children. It is the paradox between this cruelty and passion that makes Margolyes’ reading of the complicated man a compelling piece.

The love of Dickens’ life was his sister-in-law, Mary Hogarth, who lived with him and Catherine until her untimely death aged 17. For Dickens, Mary was the ideal woman: beautiful, tiny and innocent. He never got over her death; in fact, as Margolyes points out, “Dickens never got over anything that happened to him.” Mary was the inspiration of many of Dickens’ female characters, such as Nell from The Old Curiosity Shop who, like Mary, dies young and perfect before growing into an old woman, who are constant figures of ridicule for Dickens.

Dickens’ obsession with prepubescent, foolish girls have long made Dickens an uncomfortable read for feminists and, to Margolyes’ credit, she does not attempt to shy away from Dickens’ fixation with 17-year old, fair and tiny creatures. She gently satirises Dickens and calls his fixation on youth and innocence “rather icky”. Margolyes still manages to bring humour and lightness in her portrayal of the female characters such as young Nell or Flora from Little Dorrit, an older, “wide and toothless woman”, based on a terrifying later life encounter with Dickens’ childhood sweetheart who had dared to age.

Margolyes largely dedicates the second act to the older female characters that in Dickens’ work are often depicted hovering between monstrosity and the grotesque. Her portrayal of the older woman as someone beyond sexuality but still yearning for it is a painful watch. The most interesting characters are Miss Havisham and Miss Flite, who are neither objects of desire nor caricatures of older women. Margolyes saves them for last and controversially proclaims that Dickens is in fact Miss Havisham from Great Expectations. Miss Havisham, one of Dickens’ greatest characters, is a wealthy spinster who after having her heart broken, uses her step-daughter Estelle for personal revenge, only to realise she has caused insufferable pain to those close to her. It is the cruelty and view of love as self-humiliation that inspires Margolyes’ comparison between Dickens and Miss Havisham.

The play overall is very entertaining and Margolyes is most convincing throughout, but the stroke of genius I was hoping for comes only with her portrayal of the very last character Miss Flite from Bleak House, in a scene where in a Kafkaesque manner she simply gives an absurd list of items as the lights dim on the moving expression of desperation on her face.

Margolyes doesn’t attempt to rehabilitate Dickens and openly (if gently) criticises the writer for being the misogynist he clearly was. However, towards the end I was left wondering: with such a bleak view of the female sex, are we right to celebrate his genius and work?

I have always found it hard to read Dickens due to the rampant misogyny; however, after Margolyes affectionate portrayal, it’s hard to disagree when, asked her personal view on Dickens, she proclaims he was “one of the greatest writers ever lived, but as a man, he was a shit”.

The play is on a nationwide tour ending in October in Cardiff; see here for dates and venues.

Laura is a PhD student dabbling in feminist legal theory while waiting for the revolution. She hates gossip magazines and adores Björk with equal passion.