I’ve chosen to write about this song because it’s one that I’ve encountered in a number of contexts during my life, and I have found the ways in which it has been referenced in books and in films intriguing.

Two and a half minutes of psycadelic rock, during which an unsettlingly deadpan and detached Grace Slick recounts lyrics that blur the bounderies between Lewis Carroll’s Alice in Wonderland and an LSD trip.

That should have been it, surely?

A few years later, in 1971, the book Go Ask Alice (the title being a reference to a lyric in ‘White Rabbit’) was published. Initially promoted as non-fiction, a cautionary tale against the folly of taking drugs (including LSD) by a teenager who didn’t survive, the work’s status as fiction or non fiction has been in debate ever since.

Alice as LSD user was now an established template, no wonder the poor girl was seeing rabbits. 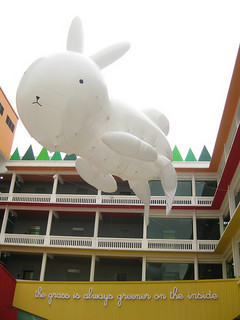 Perhaps it was with this established connection in mind, that Tim Burton included a version of ‘White Rabbit’ by Grace Potter and the Nocturnals on the Almost Alice CD when launching his own take on Carroll’s novel. The Grace Potter version sticks pretty closely to the Jefferson Airplane version.

But I’m intrigued as to the extent that ‘White Rabbit’ seems to have become a woman’s song, covered by Patti Smith for her album Twelve The only song written by a woman on this album of cover versions, Smith’s version is typically impressive, not to mention possibly even more terrifying than the original.

As well as serving as soundtrack to Tim Burton’s take on Carroll’s Alice in Wonderland, the song also turned up on the Suckerpunch soundtrack last year. Performed by Emiliana Torrini on this occasion, this is a thoroughly modern, pacier, but still rather eerie and trippy version.

Suckerpunch itself is rather ambiguous in its subject matter, and much of the narrative takes place inside the mind of the films heroine, who is imprisoned in a mental institution. Now I can’t remember a version of Alice that involved her being in a mental institution, but I suppose that sort of re-write is possible. I mean, Walter Murch did it to Dorothy in Return to Oz.

Possibly the most radical re-working I’ve heard is the Shakespear’s Sister version, which dates from about 2003 I think. You can find it as extra track on Songs from the Red Room, which was released in 2009, and it is shot through with early 80s post punk electro menace.

I do find myself wondering about the attraction of ‘White Rabbit’ to so many female performers, and so many film makers. Like Sylvia Plath’s The Bell Jar or Susanna Kayson’s Girl, Interrupted has it become a byword for female mental instability, a shorthand in itself? Or is it more than that? Is there something truly freeing about singing a song that starts in such a quiet, albeit menacing way, but which travels the gamut of emotions, all in the space of two and a half minutes?

Video commentary: The YouTube clip above shows the band Jefferson Airplane performing the song ‘White Rabbit’ on US TV in 1967. The band are performing against a psychadelic backdrop and singer Grace Slick is positioned on a podium above the rest of the band.