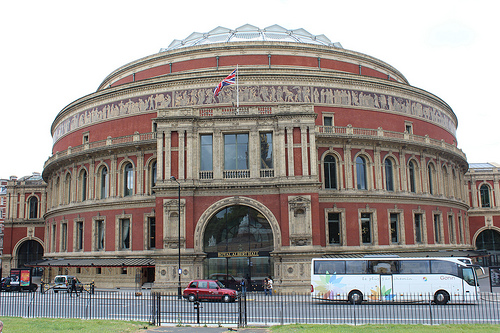 Song of the day: Siouxsie and the Banshees – Spellbound, live at the Royal Albert Hall, 1983

From inauspicious beginnings, to sumptuous surroundings…

Siouxsie and the Banshees made their live debut in 1976 at the 100 Club Punk Festival in London, an appearance much written about at the time and ever since due to the spectacle of a band who couldn’t play, but could just about turn their instruments on and off, performing a 20 minute version of ‘The Lords Prayer’.

When I about 15 and possibly at the height of my Banshees fandom, I knew someone who sold live bootlegs, and on his list was a bootleg (no doubt much worn) of the 100 Club performance. I wasn’t tempted to buy it though. I mean, you probably had to be there…

Despite gradually building up a following live, it took the Banshees a long time to get signed. They they had to watch a lot of their punk contemporaries get signed before it was their turn. (Not as many as the Slits did, but that would be another post.)

Fast forward seven years from that rough and ready beginning at the 100 Club, and the band are playing to a packed out Royal Albert Hall, a two night residency. Those concerts were recorded and released that year as a live album, Nocturne. Fast forward another eleven years and an edited version of the Nocturne video was shown on late night TV and recorded by me. I used to watch it incessently whenever I was off sick from school, so encountering bits of it on youtube is a bit like meeting an old friend.

‘Spellbound’ was one of the encores, and the original version of the track appears on the Ju Ju album from 1981.

Video commentary: This video shows Siouxsie and the Banshees performing ‘Spellbound’ as an encore at the end of one of their two concerts at London’s Royal Albert Hall in 1983. The audience can be seen dancing all the way from the seats in the gods to the circle.