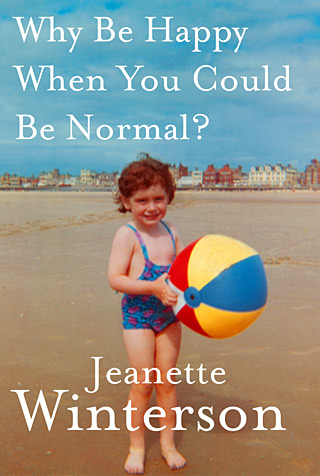 Why Be Happy When You Could Be Normal?

Naomi hands the book to me: “My mum thinks you should read this.” It’s an old paperback from the 1980s. The cover has a picture of a girl with orange hair on it. It marks the beginning of my teenage obsession with Jeanette Winterson’s writing.

Fast-forward 14 years and I am sitting in my bedroom at my parents’ house. This is the same room where I read Oranges Are Not the Only Fruit (several times), Written On The Body, The Passion and Art and Lies. Everything Winterson published until I was about 21. My mum has given me her latest book, Why Be Happy When You Could Be Normal?, for my 29th birthday. I am absorbed.

Why Be Happy When You Could Be Normal? returns to familiar ground. Winterson’s first book, Oranges Are Not The Only Fruit, is her most famous: it’s the story of her upbringing in an Evangelical household near Manchester, of her abusive, adoptive mother and of growing up differently to how you’re ‘supposed’ to. Instead of becoming a missionary and devoting her life to Jesus, Jeanette is gay and devotes herself to writing. The “fictional autobiography” mixes fantastical fairy tale sequences with the reality of growing up as a poor girl in Northern England. It is obviously a true story, even when it tells lies. Why? is a second visit to this childhood, but now includes the adult years that follow. There are no fairy tale bits and some of the earlier characters are revealed to be fictional, but this is not a more truthful story.

Winterson’s other books have mostly been straightforward fiction. They have contained princesses, heroines who can walk on water, changing landscapes and hearts that can be safely stored, still beating, in a jar for years. These fairy tales often take place at important moments in European history, such as during the ‘discovery’ of the Americas, or the Napoleonic Wars, but they can still largely be read as fantasy stories. Both Oranges and Why? refuse such simple categorisation.

Winterson believes in psychological, rather than historical, integrity. For her, fairy tales tell things about ourselves that realist stories can’t. Why? tells the parts that Oranges left out, but still does not provide a complete story. Winterson skips 25 years: “Maybe later…” Winterson argues, and I agree with her, that the distinction between fiction and non-fiction is false.

Her exhibitions scream their intimate, painful stories at the art world and force us to realise that these stories apply to us too

Female artists have to work hard to be recognised. We are dismissed for being too personal, for making art about things that are “unimportant”. Henry James said Jane Austen wrote about the minutiae of life, which didn’t do feminism any favours. Women focus on the small things. The big questions, the big canvases, are left to men. Traditional female arts – called the crafts – such as embroidery and knitting, are discounted because they are domestic and maybe also because they are utilitarian. Feminine crafts are for the household; leave the paintings for the art galleries.

This is why I think Tracey Emin is so important. Her huge quilts explode out of the smallness of the domestic. She takes a feminine craft – quilting – and plasters it like a huge canvas across the wall. She embroiders her fears and hopes on large quilts and then exhibits them in famous galleries. Emin’s work refuses the distinction between the personal and the universal, between domestic crafts and high art. Her exhibitions scream their intimate, painful stories at the art world and force us to realise that these stories apply to us too. Emin’s stories are not just about her: they are about the experiences of all women. 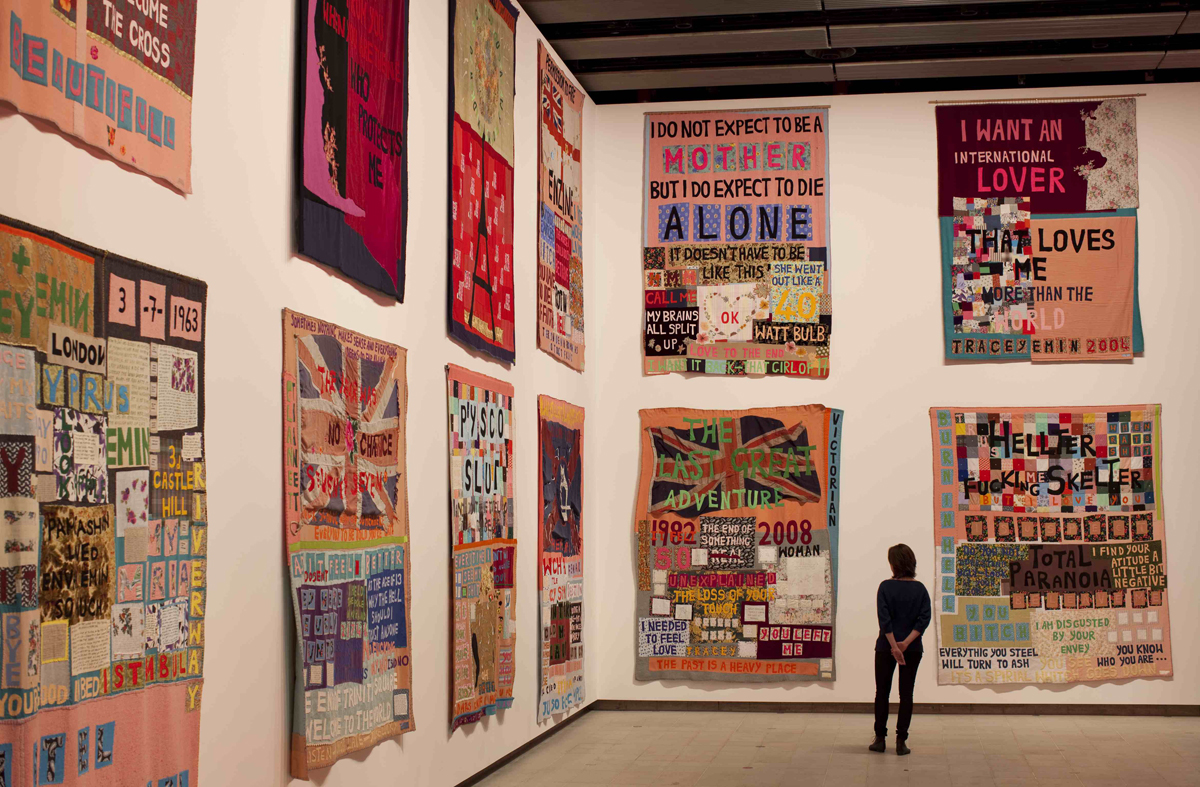 And what did the critics say about Emin when she erupted onto the art scene with the tents on which she had embroidered the names of every person she’d slept with? They were outraged: how can this be art? They said that her installations were not art because they were too personal.

Standing in a gallery looking at Emin’s quilts, you are dwarved by their hugeness.

Size and art. Art and gender. Winterson’s mother was huge in her monstrosity. This was a mother who forced an exorcism on her daughter in order to get rid of the demon that made her fall in love with another girl. Winterson’s books are full of giantesses. Larger than life, Winterson’s adoptive mother has spread across her work. The intimate, the personal, has taken over – has made – the art.

It is extremely brave of her to publish such a personal story, but what is clear from this book is that Winterson thought she had to tell it

Why? takes its title from the last thing Winterson’s mother said to her when she left home. Mrs Winterson found out about her daughter’s second affair with a woman and Jeanette knew that she had to leave. Why? returns to Winterson’s past in order to try and heal the pain of this rejection. Winterson was given up for adoption at six weeks old by her biological mother and rejected by her adoptive mother. Why? revolves around the absence of these two mothers and the trauma that these rejections caused. Winterson tells us that, having ignored this trauma for most of her life, she had a breakdown in 2007: when her girlfriend of six years left her, it triggered memories of her past losses and Winterson “went mad”.

For Winterson, creativity is a healing force. She doesn’t buy into the stereotype of the “mad artist” because, for her, art has a cathartic quality. It is extremely brave of her to publish such a personal story, but what is clear from this book is that Winterson thought she had to tell it. It helped to save her from her “madness”. And, anyway, it’s a damn good read.

Why? deals with some pretty heavy material, but is surprisingly funny. The moments of dark humour are made all the more effective by being written into such a painful story. When Winterson tells her mother that, despite the exorcisms, she is definitely gay, the “varicose vein in the top of [Mrs Winterson’s] leg bursts. It goes up like a geezer and hits the ceiling in a crimson splash.” The image of Mrs Winterson lying on the floor, leg propped on a coal bucket, gushing blood, is the last we see of her in this book. 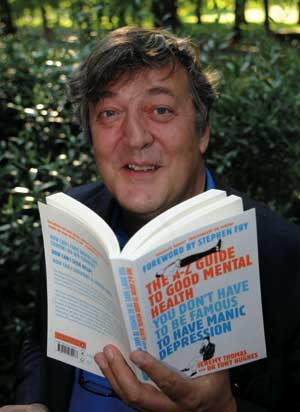 In a country where talking openly about mental health problems is still taboo, for Winterson to come out as someone who has had a breakdown is really important. We joke about therapy and acknowledge that a lot of people need to take anti-depressants, but the subject is still hard to talk about. PACE, a mental health charity for LGBT people, says that homophobia contributes to mental health problems. In a society in which it is still not okay to be gay, LGBT people are far more likely to have depression.

Stephen Fry did a lot of good when he came out as bipolar and made a BBC documentary about the condition. Fry, like Winterson, is a celebrated gay role model and probably the most famous gay man in the UK. He published his second autobiography, The Fry Chronicles, in 2010. This picks up where the first, Moab Is My Washpot, left off and narrates Fry’s adult life, including his suicide attempt and mental breakdown. For such well-known and respected public figures to come out as depressed does a lot of good for mental health advocacy in the UK. When you are depressed it is comforting to know that people you admire have also experienced the illness – that you are not alone.

When I was a teenager, Winterson’s books gave me an escape route from my own reality and became a model for the kind of writing I wanted to create. I dealt with being in the closet and my fraught relationship with my family by reading Winterson’s books, falling in love with her words and worlds and determining to follow in her footsteps to be a writer. Reading her autobiography, 14 years later, I am reminded of how much her earlier books spoke to me.

In Why?, Winterson once again creates a voice with a sense of urgency. This is not only a personal urgency, but also one that is conveyed to the reader. Winterson makes a powerful argument for creativity as a route to mental health. Why? revisits her past in order to find a way to move into the future. Her relationship to her adoptive mother and her lifelong search for her biological mother form the root she must uncover in order to find a path out of depression. Perhaps, as a writer, Winterson needs to tell her own story in order to create a home in which she finally feels she belongs. In Why? she finds not only personal truth, but also a great story.

Laura Brightwell is a writer and activist who currently lives in Berlin. She likes to think of herself as an itinerant troublemaker and writes regularly on her blog, Diary of a Lipstick Terrorist