Song of the day: Frank Chickens – We are ninja (not geisha)

Frank Chickens, a duo comprised of Kazuko Hohki and Kazumi Taguchi, began their life in 1982. They describe themselves as a “pop performance group”

It’s clear from the video for ‘We are Ninja (Not Geisha)’ that the main purpose of the track was to expose and challenge, in a very funny way, UK perceptions of Japanese womanhood. The bemused reactions of the audience on the clip from The Tube above would suggest that the presence of two Japanese women dancing to a sort of Tom Tom Club flavoured electro funk in post punk make-up, wearing what appear to be martial arts clothing was conducive to bafflement. It is possible that they took away some useful Japanese phrases though, as well as a strong warning not to fuck with Japanese girls.

While ‘We are ninja (not geisha)’ was the bands biggest hit, the band were busy throughout the 1980s, getting involved with Red Wedge for example, and supporting The Smiths. Kazumi Taguchi left the band in the late 80s, but the Frank Chickens continued, expanding their membership greatly throughout the 1990s. 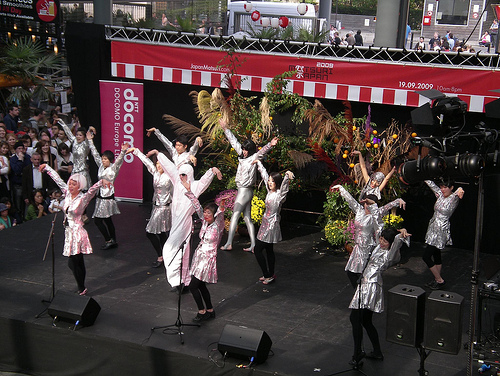 They are still going strong today and, in 2010, won the Foster’s Comedy God award at Edinburgh Fringe.

Image of Frank Chickens performing their show My husband is a spaceman. The stage is made up of figures stretching their arms like birds in flight. Image by Mister F in 2009. Used via a flickr creative commons licence

Video commentary: The video clip shows Frank Chickens performing ‘We are ninja (not geisha)’ on UK music and culture show The Tube. It is a minimalist performance, during which the duo perform a similar martial arts inspired dance routine to that featured in the songs official video.