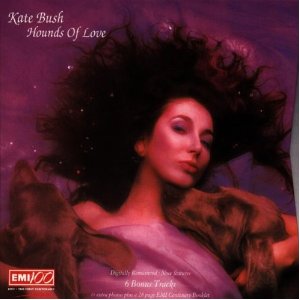 Song of the day: Kate Bush – Running up that hill

There’s a slight moment of drawn out tension, and then… the drums.

The first single from Bush’s self-produced critically acclaimed 1985 album Hounds of love, I received my first introduction to ‘Running up that hill’ when it was used to open and close the credits to a children’s BBC drama series called Running Scared, in 1986.

I don’t remember much about the programme itself as I never watched it: My sister and I watched the opening credits every week, turned over to ITV and watched T-bag (or something…) then, half an hour later, turned back to BBC1 and watched the closing credits. Perhaps ‘listened to’ would be a more accurate phrase than ‘watched’. It was a while, possibly a few years, before I got to know the song properly.

This was not my first introduction to Kate Bush, that had been the title track from Hounds of love,also released as a single, which I’d heard one morning on the radio aged six and been… if not actually scared by, certainly overwhelmed by. It had given me a splitting headache for one thing, making for a very grumpy day at infant school, and a basic mistrust of Kate Bush.

This wariness had worn off by junior school though, thanks to Running Scared, my mother purchasing a copy of The Whole Story and, in the negative sense, a more overwhelmingly unpleasant musical experience, this time at school with a forced induction to Holst’s The planet suite (playing ‘Mars’ at ear splitting volume to young children should be regarded as cruel and unusual punishment)

Considered in the context of Hounds of love, ‘Running up that hill’ is very much the muscular pop song. Unusual in subject matter, it revolves around the themes of empathy across genders and how much you can empathise across the gender line. The song was originally to have been titled ‘Deal with God’, but Bush reluctantly allowed herself to be dissuaded by EMI lest the reference to God prove controversial. The phrase ‘Deal with God’ refers to the notion of a gender-swap deal in order that the other might ‘feel how it feels’. Religion, in any form, doesn’t come into it.

Since the release of both single and album, the distinctive drum pattern has inspired such diverse artists as Santigold and Florence + the machine and has gone on to have a life of its own outside of its original context.

Bush, of course, is still making music, most recently the album 50 Words For Snow and Hounds of love remains her most critically acclaimed album, with good reason. Childhood neuralgia aside, it is well worth investigating.

Video commentary: This is the official video made to accompany the release of ‘Running up that hill’. The video shows Bush and dancer Michael Hervieu performing a contemporary dance sequence choreographed by Diane Grey. You can read a more detailed description of the video here