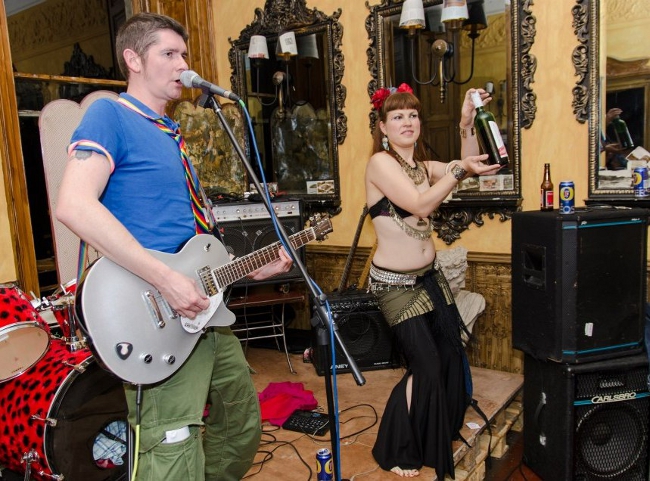 Edinburgh may not immediately come to mind as a music city or pioneer for queer activism but there is clearly a demand there for space for diverse performers. Pop punk singer and organiser Ste McCabe has helped create that in the form of the Pussy Whipped queer feminist festival. Liz Ely reports

Edinburgh is in a funny position as a city: home to the world’s largest arts festival (which can sometimes feel like a three-week-long Londoner away-day) while, at the same time, arts and music venues are being closed or threatened with closure, one by one. The place perhaps has a rather staid reputation as the dour older sibling of Glasgow, who likes early nights and herbal tea. Indeed, the programme for Pussy Whipped says that when organiser Ste McCabe moved to Edinburgh, people scoffed at his ideas, telling him it was neither a queer nor a music city. Ploughing on with a series of gigs, he has since found this “absolutely not the case”.

The Pussy Whipped Festival on 14 and 15 of September aims to provide a showcase for female, queer and LGBT musicians and performers, with some politics and film thrown in for good measure. Edinburgh has had its Ladyfests and Queer Mutiny but these events still feel too few and far between, so when Pussy Whipped comes along I jump at the chance to attend. At £7 for the weekend it seems like an absolute bargain.

I go along to the Wee Red Bar on the Friday night with my partner, who knows more about riot grrrl than I do, hoping this will help should any musical references be lost on me. Clutching our programmes (typed and photocopied for that proper DIY zine look), we walk through the crushed velvet labia, underneath the pig soft toy clitoris with a red felt-tip tampon dangling from its snout. It is clear from the beginning that Pussy Whipped will be happily tongue-in-cheek, vagina-in-your-face.

Edinburgh based electro-punk-glam-pop act Her Royal Highness kick off the night (think Beth Ditto filtered through Republica with a massive side helping of bleeps and noise). The audience all stand to attention towards the front of the room. Her Royal Highness are followed by Roseanne Barr, a double act from London who are howling and atonal like early Sonic Youth. There’s a lot of clattering, but in a good way.

Executive Legs from Leeds are one of the high points of the night. Singer Gwen emerges with an insect mask and finishes more than one song on her back, crawling through the audience. Rage, riot and plenty of keyboard noise; the programme describes them as “not quite like anything else out there”, which seems pretty accurate to me.

RauberHohle follow and are easily the most fun act of the evening. Their lead singer, Krawalla, is clad in a Care Bear costume and accompanied at various points by another bear, an elephant and a cockroach. Rauberhohle’s catchy bubblegum pop with edge has the whole room dancing as Krawalla showers them with confetti and vegan sweeties. The audio visual element to their performance is bizarre and comical. I can’t help but feel that some of their songs have not been subjected to a rigorous intersectional feminist analysis, particularly the chorus: “Stop your religion, stop your religion, I’m shitting on you like a pigeon”. However, it is so damn catchy that it doesn’t leave my head the whole next day.

Factory Acts have a difficult act to follow, particularly given that the audience attention span seems to have worn thin by this point, keen to get to the Hot Mess club night part of the evening. Factory Acts deliver a very solid performance but would have suited an earlier placing in the bill, rather than having to follow the audio visual assault of RauberHohle.

On the Saturday, I attend a workshop on transfeminism hosted by Ellis Ciruello, sociologist and trans feminist counsellor. The workshop is over-subscribed, and would perhaps have benefited from turning people away. It lays out the main conflicts between orthodox radical feminism and trans feminism – positioning radical feminism as a branch of thinking that (broadly) seeks to abolish gender, where for the most part trans feminism seeks to de-regulate it. The facilitation is helpful, though it is a shame we don’t get the chance to break into smaller groups, seeing as such a large group makes it difficult for all but the most mouthy (a group in which I count myself) to contribute. Despite this, I’ve learnt a lot from the workshop and it leaves me with a reading list and far more questions than it answers, which can only be a good sign.

I miss the first batch of film screenings, but make it into the second and enjoy them so much it makes me wish I could have caught the whole thing. Twin Set is a charming low key documentary featuring a trans woman seeking acceptance in a Methodist women’s group, all of whom welcome her with open arms. It features interviews with her mother, who is much less able to understand Jennifer’s transition, and what it means. This is followed byJames Dean, a very short Scottish feature about a teenage drag king who comes out to hir parents, in an affectionately portrayed performative flourish. Though short, the film expertly captures queer teen anguish, bullying and the desire for parental approval. Both films are shown under the theme identity and acceptance and are well chosen and complementary; both show trans* people seeking acceptance in contrasting ways. In Twin Set this is sought through involvement in the mundane everyday life of a church and in James Dean, the central character’s performance of a male idol is the outlet.

The day finishes with a duo of documentaries by John Samson. As a massive documentary fan, these are a real treat for me and I have made a note to seek out the rest of his work.

On Saturday evening, the final party is held at The Fiddlers Elbow. I have gathered from the Facebook event that there are some problems with the venue. A glaring one is the real lack of accessibility for wheelchair users. The organisers seem aware of this problem, apologising on their literature and promising to rectify this next time; Edinburgh really does suffer from a lack of accessible venues. Almost everything in the city is up or down stairs so I sympathise to an extent but it is, of course, still not good enough. 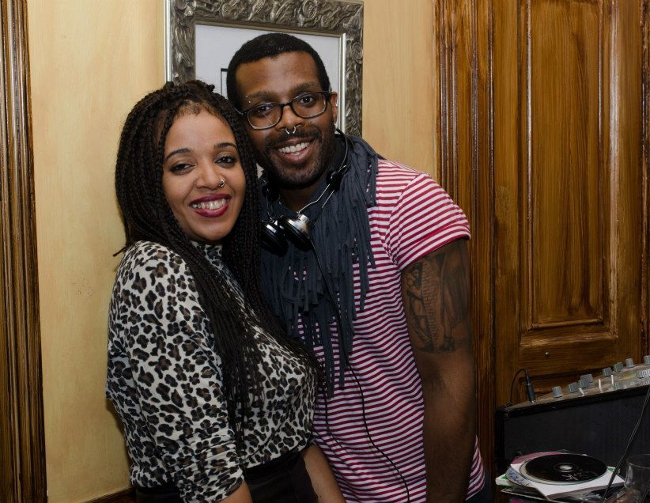 I attend this event alone as my partner is unwell today and unable to come along. One of the things that strikes me as I stand listening to bands is that I feel completely comfortable being here on my own. I wonder to myself if this is this what straight white cis men feel like in pubs/clubs and gigs as I watch band after band. I think it is a credit to the event organisers that they have created that kind of atmosphere and, while they clearly have a few accessibility issues to iron out, I’d say they are on the right track.

The first act I see in the Saturday night line-up is Liz Cronin, a singer-songwriter whose stories have the audience in tears of laughter one minute, through her darkly comic delivery, to actual tears the next, with a moving song about suicide. Queer performers presenting suicide speaks about a massive problem and systematic oppression in a way that non queer performers (generally) do not. Liz’s set is both funny and moving, a brilliant start to the night.

http://www.myspace.com/spatpunk“>spat are up next: a more traditionally rock riot grrrl number, loud and angry, striking multiple chords with the 14 year old ‘mosher’ (we didn’t have EMO in them days) in me. They dedicate their last song to hating the Tories and yell “I’m more real than you’ll ever be.” I can always get behind that.

By the time Ste McCabe takes to the stage the room is entirely full. Ste’s songs are indie and pop driven. They remind me of Hefner but are more overtly politicised, tackling subjects such as the Catholic Church’s obsession with his bottom and the response of Edinburgh City Council to hate crime, Ste knows that pop politics works best with a sense of humour. Onsind, two queer men from Newcastle playing ‘folk punk’ songs, follow. The subjects of their songs include fantasises about killing prime ministers (a common theme, as everyone here seems to hate the Tories) and queer sexuality. They are fast paced, fun and furious and there are a fair few crowd members at the front singing along to every word.

Scragfight finish the night. Unfortunately, bus times mean I only catch the first two songs, which are absolute belters. These ‘retired’ Glaswegian feminists completely and utterly rock. I leave as the audience go wild for a “reggae number about queer theory”, wishing that I had the energy to stay longer.

Sold-out Pussy Whipped proves that, while Edinburgh may not be a music city like Glasgow or have the queer factor of Manchester, there is certainly a massive demand for Ste and others to help create space for performers who don’t fit the white, male, straight, cis mould. The following day, the Pussy Whipped Facebook page is alive with the resounding cry of “When’s the next one!?” It is a cry I most definitely echo. 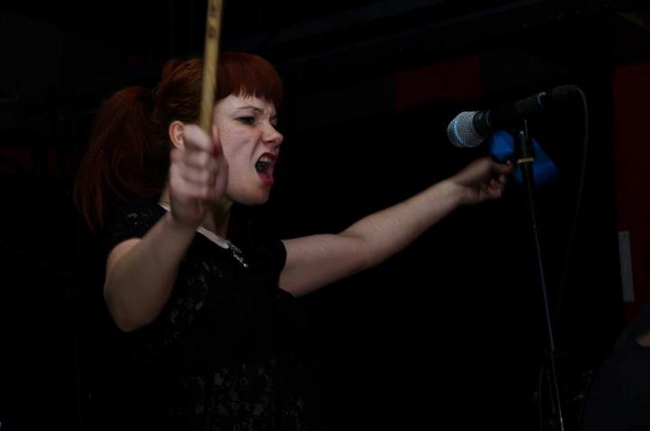 Editor’s note (1 October): Link for Liz Cronin changed to one to the Liz Cronin Musical Shambles Facebook page. Apologies for the previous error. (I’m told the page originally referenced is on a prank site!) Addendum: Thanks Louise Hipwell for getting in touch about this.