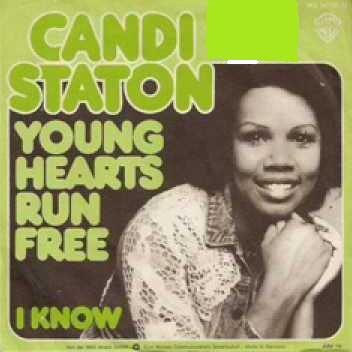 They’ll never be hung up

It is probably this cautionary message about an unhappy husband-wife set-up that has led to Candi Staton‘s jointly best-known song so readily lending itself to associations with gay liberation and feminism. Staton’s sagely advice to avoid negative relationships that are -in her own experience- very hard to leave actually came out a whole year before the first release of its antithesis: Charlene’s lament of the liberated lady, ‘I’ve Never Been To Me‘. (Personally, I’m with Laura Barton when she says this one was “apparently written by the editorial team of the Daily Mail”!)

In keeping with Staton’s comment that “I’m a victim of the very songs I sing“, it turns out that her experience of abusive relationships gave her a very good reason to advise others to embrace freedom and preserve themselves; ‘Young Hearts Run Free’ was born after she told the songwriter David Crawford about the abusive relationship she was in at the time and he based the lyrics he wrote on that account. (“It was like my life-story in a song.“) There is perhaps a feminist argument that the song would resonate somewhat more if it had been directly written by the woman herself but I’d suggest Crawford’s role as a transcriber of Staton’s experience makes it more than just another song that was penned by a man and given to a chanteuse to perform:

“I would be on stage singing that song, and everybody would be dancing but me, tears in my eyes as I tried not to cry because I was singing my own story. She recites the lyrics slowly and deliberately: ‘Say I wanna leave a thousand times a day/ It’s easier said than done, when I just can’t break away.’” (Guardian, March 2006).

Staton has also spoken of the pattern she became trapped in, saying that “In terms of the music itself, those lyrics all reflected my relationships with men. It was all about hanging on to one terrible man until he left me, meeting another terrible man and doing the same thing.”

While it would be true to say that Staton’s horrible experiences are obviously not representative of all heterosexual relationships (or, indeed, marriages), it also has to be said that this song came out at a time when marriage and compulsory heterosexuality were still very much the standard, despite challenges to the status quo from 1960s and 1970s counterculture. In the current Conservative political climate, it looks like Staton’s call to freedom and reminder of its advantages is highly relevant again.

YouTube description: Recent head and shoulders picture of Candi Staton leaning her arms on the back of a black leather chair.