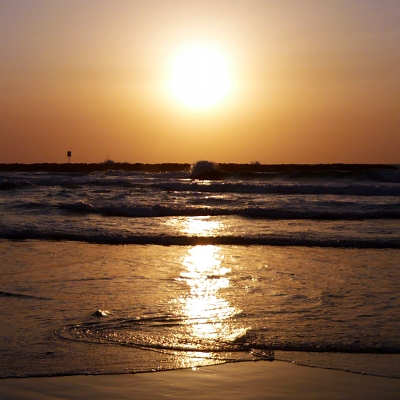 A tale of two cities

“In Haifa, they work; in Jerusalem, they pray; in Tel Aviv, they party,” the saying goes. I thought I’d put this theory to the test and visit the Israeli city of Tel Aviv.

I wasn’t disappointed. Tel Aviv has a vibrancy and a diversity you could go years without experiencing. With amazing food, beautiful beaches (see left) and a medley of distinctive bars, it has a great deal to recommend it.

There’s also a dark side to this bohemian image: we’ve just past the third anniversary of a homophobic attack in a bar in Tel Aviv that left two dead and 15 people wounded.

Overwhelmingly, however, Tel Aviv is an inclusive city – it’s the tourist destination of choice for thousands, where you can “express yourself, indulge yourself, be yourself”, according to the Gay Tel Aviv Guide. To mark the anniversary of the bar killings, a community centre has been opened to combat homophobia. It will operate a helpline to field complaints about homophobic abuse, and provide access to social workers, psychiatrists and legal assistance to those affected: a worthy legacy from the tragedy.

In Bethlehem, I worked as a human rights observer, monitoring infringements of international humanitarian law, and supporting Israelis and Palestinians working nonviolently for peace.

On my last morning in Bethlehem, I visited An Nu’man, a village between Jerusalem and Bethlehem. The people of An Nu’man are the victims of a serious error: after the 1967 occupation of the West Bank by Israel, An Nu’man was one of the villages annexed to Jerusalem. For other villages in the same position, Israel supplied residents with Jerusalem ID cards. But the inhabitants of An Nu’man never received this, even after multiple requests to the Israeli ministry of the interior. The villagers are consequently deemed to be living illegally in homes they have inhabited for more than 50 years.

Because the village is not officially recognised by the Israeli authorities, anyone who builds a new house is doing so illegally, and may find that that house is demolished. This happened to Siham and Raed, a young couple with three children. Soon after their house was demolished (see below right), Siham miscarried. Whether or not the events are related, Siham cannot help but wonder whether the stress of seeing her house bulldozed was a contributory factor.

Palestinian Queers for Boycott, Divestment and Sanctions call upon the LGBTQ community worldwide to stop seeing Tel Aviv as their chosen resort

There is also a checkpoint on the road that leads to An Nu’man, operated by the Israeli Border Police. At the checkpoint entrance there is a list of the villagers’ inhabitants that was written five years ago. If you are a Palestinian living in the West Bank, and your name doesn’t appear on the list, then you are denied entry. This means that children of elderly parents, doctors, garbage trucks, vets, even spouses of villagers who have married in the last five years, are not allowed to go into the village. 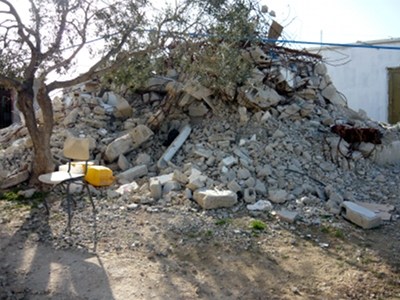 You might wonder why I’m choosing to highlight these two themes – human rights violations, and a liberal approach to the LGBTQ community in Tel Aviv – in the same breath.

In fact, some people think that they are all too closely connected. The Israeli government has been accused of exploiting Tel Aviv’s celebrated liberality to divert attention away from the very infringements of international humanitarian law, such as those that I’ve witnessed in the West Bank. They are accused of cynically embracing LGBTQ rights in an attempt to ‘offset’ other human rights violations. This is known as Israel’s ‘pink wash’.

Recently I met Tom (not his real name) from Breaking the Silence. This is an organisation of ex-Israeli soldiers who, by sharing stories of their experiences in the military, aim to “expose the Israeli public to the reality of everyday life in the Occupied Territories”. I asked him about how LGB soldiers are treated. On the one hand, he says it’s similar to the Don’t Ask, Don’t Tell policy until recently employed by the US military – not everyone wants to shout about their sexual orientation. On the other hand, the army is seen as a “melting pot” – as a gay person, being in the army is a way of fitting in, of “proving your status as an Israeli”: they can say “I was an officer, just like you”. And what about this idea of ‘pink wash’? “Israel uses gay-friendly Tel Aviv to give the impression that it is liberal and inclusive,” he agreed.

Many organisations call upon the international community to enact boycott, divestment and sanctions against the state of Israel; they say these methods are the leverage needed to end the occupation of Palestinian territories. Palestinian Queers for Boycott, Divestment and Sanctions call upon the LGBTQ community worldwide to stop seeing Tel Aviv as their chosen resort. It’s worth noting that the inclusiveness of Tel Aviv is not found throughout all of Israel – it’s a very different story in Jerusalem.

PQBDS argues: “Violations of human rights and international law, suppression of basic rights and civil liberty and discrimination are deeply rooted in Israel’s policies toward Palestinians, straight and gay alike.”

Others take a different view. A friend of mine met a couple from London, holidaying in Tel Aviv. As Paul put it: “There are so many f***ed up countries in the world where you can get hung for just glancing at another guy. It doesn’t feel right to be criticising a country who are opening their arms and welcoming us.”

You might think that the situation in the West Bank and in An Nu’man warrants a boycott of Israel. In which case I’d point you in the direction of Coalition of Women for Peace, an Israeli and Palestinian feminist organisation whose ‘Right to Resist’ campaign supports organisations who protest against the occupation.

Or, you might agree with Paul and be tempted by the many attractions Tel Aviv has to offer. If this is you, then I’d also invite you to the West Bank. Come and visit, hear from Palestinians and Israelis, and work out whether you think this ‘pink wash’ theory holds water: but whatever you do, it’s crucial, as the Foreign Office puts it, to Know Before You Go.

Photos by the author, Hannah Brock

Hannah Brock served for three months with the Ecumenical Accompaniment Programme in Palestine and Israel. EAPPI brings internationals to the West Bank to experience life under occupation. Ecumenical accompaniers provide protective presence to vulnerable communities, monitor and report human rights abuses and support Palestinians and Israelis working together for peace. When they return home, EAs campaign for a just and peaceful resolution to the Israeli/Palestinian conflict through an end to the occupation, respect for international law and implementation of UN resolutions.