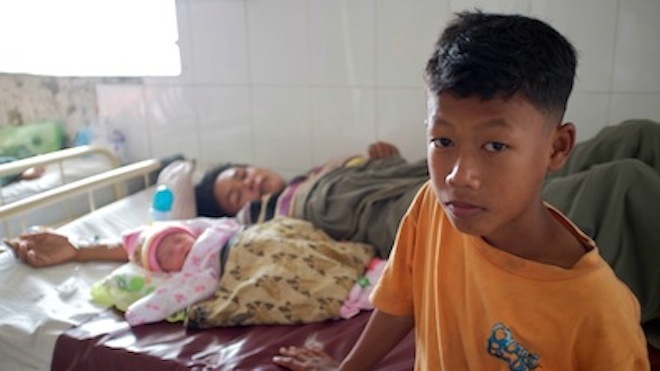 Welcome to the world?

Brian Hill’s latest documentary on pregnancy and childbirth lacks a recognisable reference point for the relatively comfortable UK audience, which makes the film seem all the more honest. It takes us into poverty, absolute and relative, and shows us, without the cushioning of intricate focus switches, complex editing or a sombre soundtrack, one of the most underrepresented healthcare issues in the world: maternity.

Welcome to the World, a still from the Cambodia segment

In a media landscape where One Born Every Minute and Call the Midwife has come to represent the norm, I’d never seen such uncensored depictions of maternal health as those in Welcome to the World. Hill turns his focus to the impact of lack of resources on childbirth in Sierra Leone, Cambodia and the USA and, more specifically, to the experiences of three poor women in these countries being pregnant and giving birth. Their fear, hope and ultimate powerlessness is real.

Even in the comfort of my own privacy, I tried not to have a typical reaction to what I saw: that of a sensitive, comfortable European, a thousand degrees of separation from absolute poverty. Saying that is not to belittle the moving television reports from poverty-wracked regions but to bemoan their familiarity as a genre; in WTTW there’s nothing much but the camera between the audience and the largely unfamiliar subject. Offscreen commentary is mostly confined to the introduction of the documentary while the voices of the women and their physicians steer the narrative proper. There is no one interpreting, explaining their situation to us or urging us to act, only the necessary subtitles translating unstaged dialogues.

The film shares the voices of women whose experiences remain hidden, a subject so uncomfortable to the patriarchal world that no one in the mainstream media seems to have the courage or resources to portray it with any depth

The simplicity of the establishing shots lets the experiences of the mothers speak for themselves. Despite their ethnic diversity, the similarities of their situations are striking to the audience.

Highlighting the very real issue of living below the poverty line closer to home, the movie follows the struggle of a homeless family in the US, thus revealing not only the absolute poverty, so familiar in our media, of what we in the UK often think of as faraway lands, but also the relative poverty experienced by an increasing number of North American and European families following the impact of various political-economic crises.

Though many documentary genre expectations are fulfilled in terms of form, the difference is the focus on maternal health and mortality in addition to infant mortality. The film is feminist in sharing the voices of women whose experiences remain hidden, a subject so uncomfortable to the patriarchal world that no one in the mainstream media of the global North seems to have the courage or resources to portray it with any depth. When we think of “maternal health” in the here and now, our consumer-focused media make certain that images of stretchmark lotions and nipple shields come to mind, pampering sets with scrubs and oils. In other words, maternal beauty, not maternal health.

The film also provides a contrast to the common representation of young pregnant women in US and UK media, seen most often on MTV’s hit shows 16 and Pregnant and Teen Mom. The exploitation of “underage-white-trash-childbirth-as-entertainment” this isn’t.

Maternal health is an issue that is neglected worldwide, but the brutal implications of the ongoing inequality of poor women’s access to healthcare are mostly ignored in the mainstream mass media

Although the inspiring work of midwives and doctors working in impoverished regions is rightly depicted heroically, I was surprised to see the social institutions of the developed world cast as superior – and always the best – solutions to most pregnancy complications. A deliberate contrast is set up between the services provided for the impoverished American family and impoverished families in the developing countries we see. Yoga, photography and complimentary therapy services are offered to boost the emotional wellbeing of the US mother, while Caesarean sections, antibiotics and surgeries are presented as the peak of maternal care in Sierra Leone.

Starr, the US mother, highlights the paradox in the antenatal system in which she finds herself: “I’m just having a baby, it’s a very natural process that a hundred years ago had nothing to do with doctors and medicine…” In the Sierra Leone segment of the film, little is made of the services of traditional female birth attendants who subvert the assumption that childbirth education and quality antenatal care must be deployed by clinical institutions. That many women are still referred to traditional doulas, not just in the countries of the global South, implies that taking childbirth out of communities and into hospitals isn’t necessarily the epitome of good care. But the documentary makes clear that access to services for those who need more complex care should be available – must be available.

We say children are the future, and it is women carrying, pushing out and more often than not nurturing that future. Maternal health is an issue that is neglected worldwide, but the brutal implications of the ongoing inequality of poor women’s access to healthcare are mostly ignored in the mainstream mass media. This documentary presents us with unabridged factual accounts and leaves us in no doubt that addressing this worldwide problem will require an overhaul of the media’s approach to the maternal body.

The film will be broadcast on BBC1 on Monday 19 November as Four Born Every Second.

Chrissy D blogs mainly about sexual politics and parenting, usually not at the same time