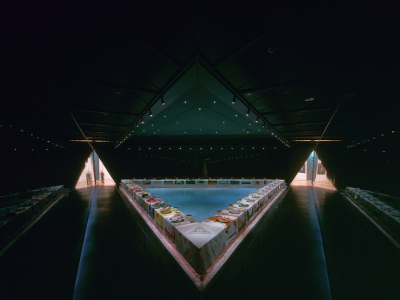 For the first time in 25 years Judy Chicago is exhibiting in the UK, with one show in Liverpool and two in London. Through her art and education practice she started a new movement, “Feminist Art”, which is regarded as one of the most important in 20th century art history. Her enormous, groundbreaking installation ‘The Dinner Party’ (1974-79) shocked the art establishment with its 38 place settings for famous women complete with vagina-like food when it toured the Western world in the early 1980s. Through ceramics and embroidery, Chicago celebrated forgotten women in Western culture, raising questions about what counted as art and who did that counting. Her pioneering work paved the way for new women artists and new debates about the ways in which women are excluded, erased or not recognised in mainstream culture and history. The fact that this is still an issue today, Chicago reflects, has taught her “how long change takes.”

Chicago is used to speaking up; the criticism of her work has frequently been vitriolic. We learn that she has thought and taught a lot, encountering and countering gendered structures in Western culture. She prefers “older” to “elder” and she is not interested in description but is full of stories about makings, processes and intentions. She knows what she has done as a feminist artist, what effects it has on other women, the continuing injustice of the status quo and the need for her to continue.

Chicago’s three current exhibitions show different aspects of her work. The Riflemaker’s exhibition in Soho (Deflowered) presents early works, exhibited already this year at the Nye Gallery in Los Angeles, as well as works connected to the UK. With spray painted car bonnets, designs related to ‘The Dinner Party’, wooden blocks, colour studies and works in other media, this is an exciting and enjoyable exhibition. It’s mainly a retrospective snapshot displaying Chicago’s myriad skills in different materials and techniques associated with technology and craft, demonstrating a commitment to her messages rather than high art.

Chicago’s art is political and emotional, bringing the personal into public spaces

Chicago unmakes gender and power associations. She has apprenticed herself to many trades and recaptured women’s craft traditions to create new values in art, especially in women’s art. Her early minimalist work, using industrial processes to deconstruct, explore and reframe her sensed experiences of colour, light and form, prefigures more obviously feminist work of the 1970s but also reproduces, shares, invites and demands collaboration through sensory experience from the viewer. Her car bonnet pieces sprayed in bright retro ice-creamy colours look at first like Aztec masks or Hawaiian patchwork as you focus in on the stylized genitalia.

For both of us (Jennifer as an academic and Andie as an activist) co-construction and collaboration are important parts of our work to subvert authority and power in different situations. Chicago agrees that she is constantly subverting structures and discusses how many of her works are co-created, which is, she says, what artists have always done. The difference is that she is transparent about it: 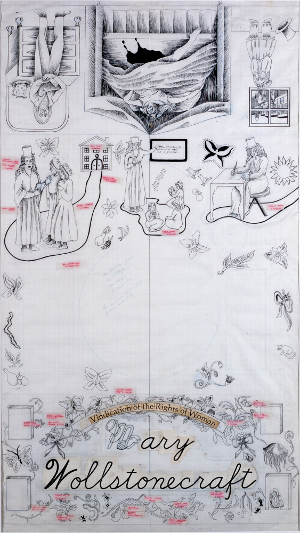 “Although I started ‘The Dinner Party’ all by myself there used to be a joke in ‘The Dinner Party’ studio on Thursday nights, when we had our regular weekly sessions, you know, at one point there were seventy five people, and they all said – oh yeah, Judy thought she would china paint in the morning, do needlework in the afternoon, and do research at night, all by herself, ha ha ha. And they’d all laugh. So the ideas were just larger than I could realise myself, and it’s not unusual for artists to have assistants or collaborators, it’s just unusual to be transparent about it.”

This commitment to transparency as a value comes through in her art. It is not only about the making practices in large projects, like the Birth Project, but is a physical reality in her applied use of colour and light and it’s also key in her private and public relationship with her art.

The Riflemaker exhibition includes work that originated in time spent in the UK, such as pieces associated with ‘The Dinner Party’ participants Mary Queen of Scots and women’s rights activist and philosopher, Mary Wollstonecraft, as well as two pieces from the ‘Woman Tree’ series marking Chicago’s experience of climbing into the hollow tree on Hampstead Heath. She also makes her production process transparent with the inclusion of a test ceramic plate and the sketched table runner/sampler design for Mary Wollstonecraft’s place setting.

She goes on to explain: “Equal pay is not enough unless we have equal public space in the universities and in the museums”

Chicago’s work is layered and complex but also bright and full of humour. She continues to subvert gendered structures by challenging value systems, always presenting personalized differences. It’s about self-identity and identities, about sexualisation, transparency and co-construction, about coming from the centre and seeing to the core of the psyche and about undoing beliefs and changing perception. It is political and emotional, bringing the personal into public spaces. This is Art as Action, a revolutionary praxis linked to Chicago’s work as a pioneering art educator at California State University on the first feminist art programme, championing women’s achievements and countering their erasure by working with artists, scholars and the wider public.

In 1978, she founded Through the Flower, a non-profit organization created to curate and care for ‘The Dinner Party’ managing exhibitions and education programmes about the women it represents, but which has overseen the creation of Chicago’s other large collaborative projects. Astonishingly, it was only in 2007 that ‘The Dinner Party’ found a permanent home in Brooklyn at the Elizabeth A. Sackler Centre for Feminist Art. 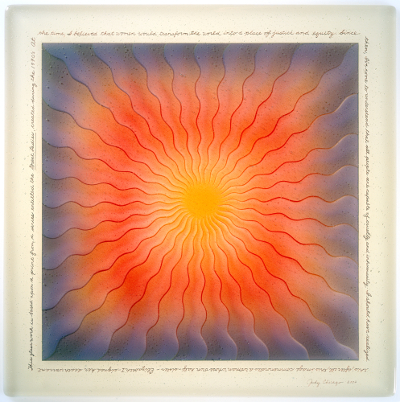 Reflecting on this, Chicago remembers Sackler’s slogan at the time: “equal pay, equal space”. She’s talking about democracy and the lack of public space given to women in the great Western institutions. Chicago is clear about these issues:

“We have such a hugely rich history and we know nothing about it. We have an institutional failure, that is the institutions have not…neither the universities nor the museums… have not moved away from a male centred curriculum or a male centred art history. What we need is a complete transformation of our curriculum and of the museums.”

She goes on to explain: “Equal pay is not enough unless we have equal public space in the universities and in the museums. When feminism went into the academy there were unfortunately feminists who did reproduce the structures…” Perhaps because it is transparent, her work is frequently reflective. The fused glass panel revisiting her 1972 design for Mary Queen of Scots plate is a new memorial work that reframes an original and captures new thoughts and moments in words to set the piece within a current context. The fact that this Queen’s death warrant was signed by her own cousin and neighbouring queen provokes a wistful reference to a lost feminist ideal that all women would naturally support one another.

Chicago is reflective about the historical shift in perceptions of feminism; she defines it as being “about values, rather than gender”

Her work at the Ben Uri Gallery, the other London show, exhibits public work and personal intimate pieces: her ‘Autobiography of a year’ (1993-94) is a diary of small sketches that are emotionally colour-coded and available for de-coding by the viewer; her sketched experience of hysterectomy is also on view as is the photographic compilation recording ‘My Accident’ (1986). Pieces in the exhibition cover a range of projects, such as the collaborative ‘Birth Project’ (1980-85) whose visceral ‘Birth Tear’ (1982) is careful embroidery in screaming tactile red.

These works, like her Holocaust project pieces, are designed to make the unforgettable visible and make people think again about human nature and processes of identity and othering. Prints from her recent Retrospective in a Box look back at her career. ‘Aging Woman/Artist/Jew’ (2012) is a celebration of transparency and multiple identities showing a naked Chicago at the centre of an energetic field with a rocketing star moving up from her genitals. The words “EVERYONE WOULD SEE WHO SHE REALLY WAS” are typed across the front while handwriting personalises and fuses her multiple aging woman, artist and Jewish identities. 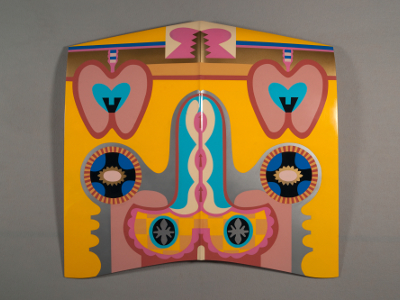 The exhibition culminates in a recent photograph by Donald Woodman of Chicago. Entitled ‘Eve in the Garden at 70’ (2009), it was apparently a spur of the moment commission, created with humour and it shows her as she is (and is at the same time a witty social comment on the beauty of aging bodies, desire and ‘nature’). Chicago’s work is placed in context with works by three other women artists – Louise Bourgeois, Helen Chadwick and Tracey Emin – whose similar subject matter suggests parallels and whose ambivalence towards or negation of feminism is equally well known.

This prompts the million dollar question: what exactly is feminism? Chicago is reflective about the historical shift in perceptions of feminism: she defines it as being “about values, rather than gender”. Her own definition has changed over time:

“In the ’70s I and my sister feminists defined it entirely in terms of gender, you know, and made the erroneous assumption that all women were our friends and all men were our enemies. It became clear to me that it’s about values. It was always about values actually, and about trying to work for a world in which everybody has a voice, and there is equality for all creatures, human or not, and that’s a very different world than we live in. It’s not just about women in the West gaining rights; it’s about a world-wide transformation.”

Judy Chicago’s work can be seen in London and Liverpool:

Deflowered at Riflemaker, London, until 22 December; Judy Chicago and Louise Bourgeois, Helen Chadwick, Tracey Emin: A Transatlantic dialogue is at Ben Uri, the London Jewish Museum of Art, London, until 10 March, 2013; Voices from The Song of Songs was at The Black-E Gallery, Liverpool, until 30 November.

Andrea Berryman is an MA Women’s Studies student at Ruskin College and a keen activist within the Oxford Feminist network. Jennifer Patterson is a feminist academic and senior lecturer at the University of Greenwich. She is a visiting lecturer in French feminist theory and feminist art for the MA in Women’s Studies at Ruskin College. Having rejoined the academic community after a spell in the ‘real world’, she is currently developing her teaching and writing as activism.