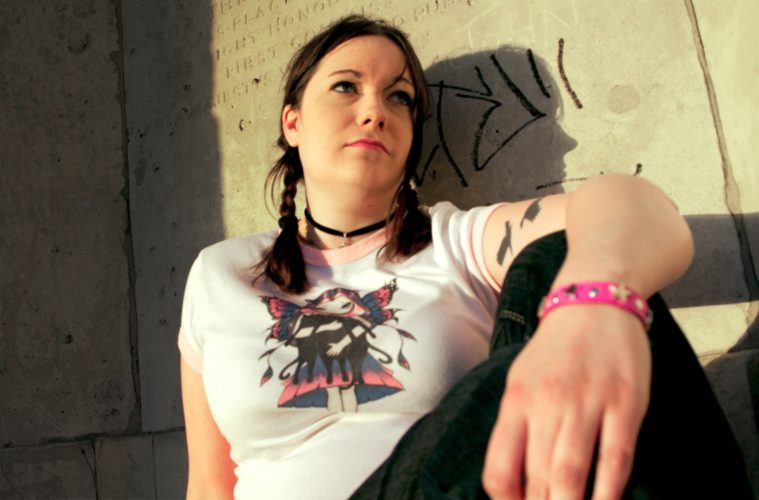 Gaptooth is a synth pop act with an unambiguously feminist message. Holly speaks to her about the forthcoming single ‘Ladykillers’ and its significance, in anticipation of its 10 December release on International Human Rights Day

With its references to De Beauvoir and lyrics about women’s need for “credit where credit’s due”, Gaptooth is a synth pop act with an unambiguously feminist message. She began playing live shows in 2006, after DJing with the all-female collective Chicks with Decks for two years in Oxford and Bristol and was one of the main organisers of Ladyfest Bristol 2007. She relocated to London in 2009, where she has been in the studio recording new songs for her debut album.

In anticipation of the 10 December release of ‘Ladykillers‘, I’ve spoken to Gaptooth about the single’s background and direction:

I first heard Ladykillers at Ladyfest Bristol in 2007 and it stood out to me as a potential single at the time. What journey has the song been on between then and now? Has it taken on any new significance?

I wrote and recorded the song in 2004 and then put it out on a four song demo which I used to sell at gigs. That was a very different version – more indie, less electro. After Ladyfest Bristol 2007, I took a bit of a break from gigging to record some new material. The track has been remixed twice since then – once in 2010 for a competition run by The Girls Are and again in 2012 for the single release. I’m a perfectionist so I find it difficult to leave a song alone, which is why my album has been in the making for about a decade, but I plan to finally release it in 2013.

Ladykillers is released on International Human Rights Day and the date also marks the end of the annual Sixteen Days of Activism Against Gender Violence. Can you tell me a bit more about that?

The song was borne out of frustration at experiencing sexism of all kinds whilst being told by people around me that the battle for equality has been won. It’s about ‘ladykillers’ in the sense of men who objectify women but it’s also meant in a much more literal sense. Two women are killed every week in the UK by a partner or former partner. I wanted to make the point that violence against women is directly linked to gender inequality, which is why there are lines in the song about domestic violence and marital rape as well as forms of sexism that might seem more mundane. I’ve also written about the connection to the Sixteen Days of Activism on my blog.

Part two of my mini interview with Gaptooth to follow at 3pm on 4 December.

The cover of ‘Ladykillers’ by Gaptooth (seen on Soundcloud clip) is dark pink with a black border, writing and silhouette of a long-haired, skirted, ankle-booted figure with a guitar.