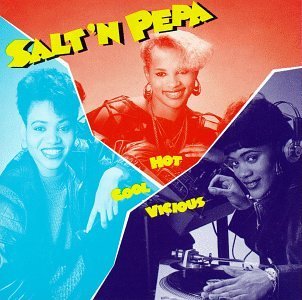 A re-working of the Otis Redding and Carla Thomas duet, from 1967, this was an early outing for Salt N Pepa, and in terms of success it would be eclipsed by the remix of the singles B Side, ‘Push It’, a year later.

While the original ‘Tramp’ revolved around Thomas giving Redding a pretty harsh sartorial critique, and Redding attempting – in an increasingly futile manner – to defend himself from the the verbal barrage, the Salt N Pepa take refocuses this criticism of men away from the sartorial to the behavioural, and in doing so becomes a searingly honest, not to mention spot on, critique of sexual harassment.

This isn’t TLC’s ‘No Scrubs’, the behaviour Salt N Pepa are finding exception with is men who won’t leave them alone, who think they are sexually irresistable, not men who are attracted but are poor. It’s not so much an update on Gwen Guthrie’s ‘Ain’t nothin’ goin’ on but the rent’ as an assertive take on day to day harassment. And it’s subversive too, it flips around the meaning of the word ‘tramp’, one of a number of words the wounded male has been known to yell after any woman who has been propositioned in the street and has walked away. The ‘tramps’ here being the promiscuous men, the ‘eve teasers’ who are hassling the women, not the assumed promiscuous women.

As an anti harassment record, it has probably never been bettered, and deserves to be embraced for that reason. Because sadly, as innumerable events this year have shown, we do still need an anti-harassment anthem.

Picture of a jukebox ready copy of Salt N Pepa’s ‘Tramp’ by djwudi, used via a flickr creative commons licence

Video commentary This video shows Salt N Pepa in a number of social situations and performing the song ‘Tramp’. Some of the social situations involve one or both of them being approached and harassed by men. At the end of the video, each of the situations is replayed over the final beats of the song, and each clip is stamped with the word ‘Tramp’ to suggest that the situation shown in each clip shows the man behaving like a ‘tramp’.