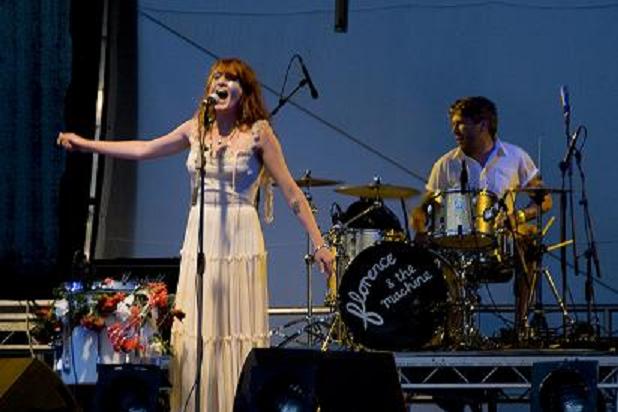 Song of the day: Florence + the machine – Dog Days (live at the Brit Awards launch party, 2009)

One of the attractions of compiling clips and songs for the song of the day series was that it enabled me to look at a number of clips that encapsulate the moment when an artist went from minor cult success to mainstream success, or the imbetween stage, depending on the speed of that success.

Florence + the machine, who have their origins in Florence Welch’s teenage collaboration with keyboardist Isabella Summers, released their debut single, ‘Kiss with a fist’, in 2008 and ‘Dog Days are over’ was the follow up. More indicative of what would come to be known as the bands sound, the clip below shows the band peforming ‘Dog Days…’ at the 2009 Brit Awards launch party.

What is striking about this clip is both Welch’s gaucheness and apparent nervousness contrasted with the strength of her voice. It’s also nice to see a clip of her performing before the stylists got their hands on her.

The band went on to win the Critics Choice Award at the Brits that year, and the opening bars of ‘Dog Days…’ were everywhere on TV that summer, along with the hit single ‘Rabbit Heart (Raise it up)’. In the light of that success, and the bands continuing good fortune, it is nice to stop for a while and to look back at what may have been the moment when they began to cross over from the festival circuit and the indie world to mainstream success.

Image of Florence + the machine live in 2008 by Sweenpole2001, used via a flickr creative commons licence

Video commentary This video shows the band performing the track ‘Dog Days’ for an invited audience at the Brit Awards launch party in 2009. The band are nervous but put in a highly charged performance. The audience are receptive if, initially, a little puzzled.