More equal than others: marriage, relationships and prejudice

Philippa explains why equal marriage should be allowed, and looks at how ridiculous some of the arguments against it are 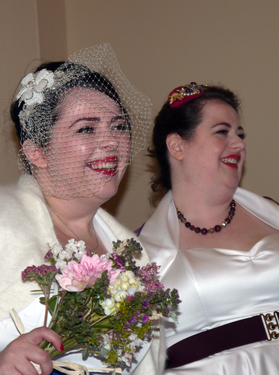 Today, MPs are to start debating whether or not I should be allowed to get married. Not just me, of course, same-sex couples, but it is hard to avoid taking it personally sometimes when the media is full of people telling me that my relationships aren’t real, worthy, productive or moral.

The arguments are, in many cases, ridiculous. One that I keep hearing is that the purpose of marriage is to have children, which I assume makes it unethical for anybody infertile, post-menopausal or anybody who simply does not want to have children to marry too. Plus, my gay friends have just as many kids as my straight friends do.

But of course it is not really about procreation. It is about prejudice and discrimination. Some kind of terror that if I was to marry a girlfriend, that would downgrade marriage and make “real” heterosexual marriages less important. I’ve noticed that a lot of the people who are campaigning against equal marriage are also those who talk, in general, about the importance of marriage as an institution. You’d think they would want to reinforce its significance by allowing even more desperately-in-love couples to celebrate their mutual adoration in this way, but no.

Another argument I keep hearing is that marriage being between one man and one woman is Biblically correct, selectively ignoring all those pesky polygamous marriages in the ancient tome that threaten to upset their paper-thin arguments.

I’ve heard many opponents of equal marriage complain that when they express their views they get accused of homophobia. I hate to be the one to break it to them, but if they believe that gay couples should not be allowed to have the same legal partnership rights as straight couples, then they are being homophobic. Others have brought up a multitude of bizarre concerns, like that legalising gay marriage will cause 40,000 teachers to lose their jobs and that it is, according to that bastion of morality, the Pope, “among some of the most insidious and dangerous challenges facing the common good today”. How? Why? What?

Maybe they do make a factually accurate point that marriage has historically been heterosexual but scurvy, domestic violence and the monarchy are also historically significant and I have no desire to preserve any of those either. And if anybody else starts fretting about a slippery slope that ends with us marrying horses, I may scream. 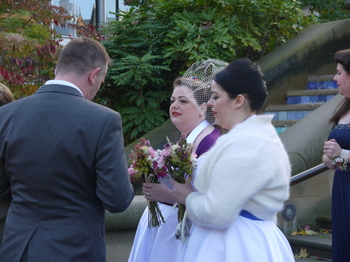 Two of my best friends got married in October. They are the best-suited couple I know and they are deeply in love, but because of the law it wasn’t actually a marriage, it was a civil partnership. There is no justifiable reason why Sandra and Claire had to have a different kind of wedding than if one of them had been a man, and although they had wedding dresses, wedding cake, bridesmaids, best men and so on, legally they are considered to be not really married.

I’m not a massive fan of marriage, myself. It’s not something I ever want to do, but it is fundamentally wrong that I am not allowed to because I fancy women rather than men. I also believe that straight couples should be allowed to have civil partnerships, if they prefer that option.

The proposed change in law will allow religious institutions to choose whether or not they will marry same-sex couples, which actually gives them more choice than they have currently. It will also allow gay couples who have religious beliefs to have a service which is much more meaningful to them than a secular register office could ever offer them.

I genuinely do not understand why it would worry so many people if I was allowed to marry, or if Claire and Sandra could have had a different kind of celebration. Them getting hitched is no threat to their neighbours’ marriages, neither of them has any desire or authority to sack teachers, and they both have more morality in their little fingers than a man who presided over the biggest child abuse cover-up in history.

Let’s equalise it all. There is simply no justification for this kind of discrimination in 2013.

[The two photographs are of Claire and Sandra on their wedding day. They are both dressed in white dresses and smiling. They were taken by me]