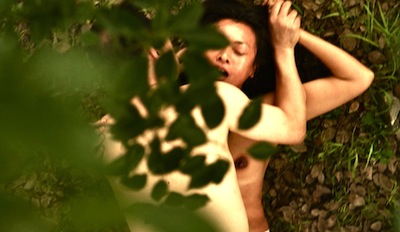 On UFO and Chinese women

At age 16 I opened a copy of Chairman Mao’s Little Red Book and came across the sentence: “As for women, in addition to being dominated by [political authority, clan authority and religious authority] they are also dominated by the men (the authority of the husband).” Having had hardly any knowledge of Mao’s brand of socialism or of China’s recent history, I remember thinking: “this guy sounds cool” before happily moving on. At this stage, my favourite film about Chinese women was the Disney classic Mulan: I am sure many readers will empathise.

Chinese born Xiaolu Guo’s UFO In Her Eyes would have been more useful to the younger me, prone as we all sometimes are to casual judgements. The film deals with Mao’s legacy regarding women in modern China in a grand, beautiful and playful way, picturing rural Chinese society in fast-paced decline. It is like a Chinese Middlemarch, only more surreal and even more raucous.

UFO centers on an unmarried woman Kwok-Yun, a female peasant and mine worker, pretty insignificant to the society around her. Aged 35, she is under heavy pressure from her grandfather and fellow villagers to marry, but unfortunately there are no available men of a similar age. This does not stop her from chasing romantic and sexual gratification. The film opens on a steaming hot day, the camera shots gliding over lush green mountains to find Kwok Yun making love with the older, married schoolteacher under an ancient camphor tree.

One of her choice Mao mantras is: “All sexual activity without intent to marry is exploitation of women”

That day, 11 September, 2001, proves to be fateful. Lying alone under the tree after her lover has left, Kwok Yun appears to spot first a UFO and then a lost and injured American hiker, played hilariously by German-American Udo Kier of vampire trilogy Blade fame. Kwok Yun tells all this to the female communist village leader, the tough-faced, chain-smoking Chief Chang, acted fearsomely by Shanghai actor Zhang Liqiu and the interaction between these two strong female leads propels the rest of the narrative.

Coming from an older generation, likely to have been a member of the Red Guards as a young woman in the 1960s, Chang is a contradictory figure both in terms of her politics and her understanding of women’s roles. Mao is her idol – one of her choice Mao mantras is: “All sexual activity without intent to marry is exploitation of women” – yet she is twice divorced. After Kwok Yun claims to have spotted a UFO, Chief Chang spots an opportunity to pull together many threads, forcibly dragging the village out of rural poverty and into ‘The Future’. As we learn later, however, this communist leader has a highly capitalist vision of this future. 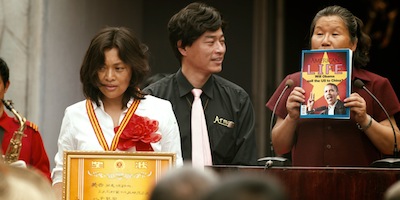 An unimpressed Beijing police inspector investigates the UFO sighting. Mountains shrink as the mining in the area expands and eats them. Lakes are dug over. Ramshackle homes demolished. A five-star hotel is built with donated money that should have been spent on education. Chang organises a suspect office renovation complete with MacBooks and lava lamps. Even the fateful camphor tree is razed to be replaced by a modernist statue of the UFO, somehow forced into the shape of a communist hammer and sickle. And a mute migrant worker from Manchuria seems to be constructing a mysterious vessel of his own…

Like the shots of grand, green mountains that open and close the film, its sweep of modern Chinese society is expansive

Because of Kwok Yun’s crucial role in this transformation, romantic and economic opportunities present themselves to her afresh. These bring tensions as a widening gap develops between Kwok Yun and the other village women, who seem as unforgiving of her as ever. Kwok Yun starts to lose any small standing she had in the old world and the question is whether the new world, complete with lipstick, heels and American fashion magazines, will suit her any better. And how will the old world villagers stick ‘The Future’?

Like the shots of grand, green mountains that open and close the film, its sweep of modern Chinese society is expansive. Guo achieves this by focussing on the particulars of relationships between men and women, bosses and workers, ‘Foreigners’ and Chinese, migrants and peasants. And the results suggest that there might well be room for women at the top of the hill, but perhaps only one at a time. Wide-ranging and with such joy in the storytelling, UFO In Her Eyes marks a pivotal moment in Guo’s career and is a great contribution to Chinese independent cinema. 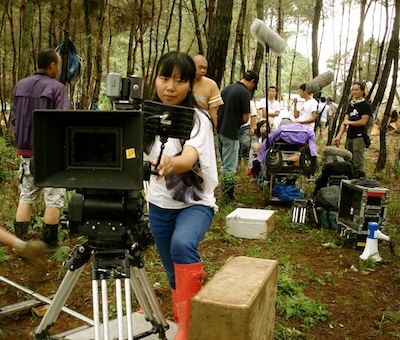 Considering her young age, Xiaolu Guo (left, on the set of UFO) is an extremely prolific artist and her previous two feature films were adorned with prizes, including the Grand Jury Prize for best feature fiction for How is Your Fish Today? at the International Women’s Film Festival in Paris in 2007. She studied film in Beijing and London and has been publishing novels for over 20 years. Her move to London just over ten years ago provoked her transformation from critic to filmmaker. I asked some of my questions about UFO in an email interview with Guo. Her decisive, poetic responses are below.

Despite the romance, the themes that the film tackles are very big – globalisation, capitalism, socialism, Chinese society, women and, of course, ‘The Future’! Did you set about to try and tell a modern day, ‘state of the nation’ story?

It is a George Orwell Chinese version, in terms of his vision of totalitarianism. The subject is so much explored in those Russian novels, post soviet novels like Master and Margarita or Life and Fate. “State” is a great monster of man-made product, and we barely think about the nature of a state, from secular society to the top organizations. We avoid to talk about that in a modern world… layers of control, and ideology, replaced the emotion of humanity – it results from the total control of state power. Why are we so happy to be robots of certain ideology? That is very sad historically speaking.

How difficult was it to get permission to film in China given that your film shows the Communist party in an unflattering light?

We are independent filmmakers not the official ones, in China, which means we just need to be persistent enough and play games to film what we want to film without going through unnecessary processes to get permission. You do that in any third world country, even in the first world. 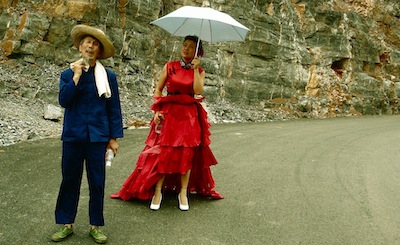 So to find your freedom in the limitation, as any other thing, if you are driven enough. All indie Chinese art house cinema is financially supported by the French and the German, then through Cannes, Berlin and Venice etc festivals, due to political reasons.

I found the interplay between Mao’s views on women and the images of wealthy women promoted by American magazines very interesting. Do you think the old Chinese socialist society, before economic reforms of recent decades, was better or worse for women than the way things are now?

It would be dishonest to say it got worse. It got massively improved after Mao and during Mao, one must admit… Chinese female roles are very different subject from western feminism, but not a little talk in this email maybe…

Your cast was incredible. How did you choose the two leads? Did you ask locals to play the villagers or did you use professional actors?

Thanks. I do like those actors. Two women leads are professional as the roles are really important in terms of acting. But the rest are local citizens and local peasants we found on the street. I think the authenticity is crucial for such a film… peasants cannot be played by cheesy actors. I don’t believe that.

And how did you get Udo Kier on board? His rendition of ‘Wild is the Wind’ was so great! 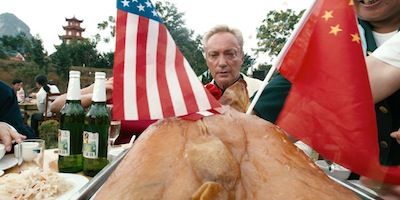 Udo is a pro. Udo is to do with his odd appearance in other art films from last 30 years of European cinema history. And of course actually I wanted him to sing David Bowie’s version of ‘Wild is the Wind’.

I found the focus on animals and how we often saw things from the animals’ perspective to be some of the most interesting and touching parts of the film. What drew you to portray animals in this way?

Animal points of view are a part of the surrealist fairy tale setting of this film – a certain continuity with the ending UFO themes. Without that, UFO is too much a concept, visually. I wish I could do more.

Was the little pig towards the end of the film actually slaughtered?!

Pig, of course, we killed it and ate it for the dinner – how can one eat meat in everyday life and be in denial of killing animals? Only Hollywood will do that. 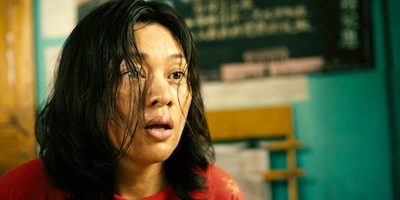 You wrote this as a novel before making it into a film. How do you feel the story has to change with different mediums?

The original novel is 37 reports of police investigation, without character development, but film is a total narrative development with the coherence of dramatic arc. Several of my novels don’t have narrative arc at all, but in fiction cinema you could barely afford it because the public commercial aspect of the cinema due to financing.

How do you feel your filmmaking has developed since earlier creations like She, a Chinese? Have you changed in what you want to portray?

I am kind of gaining a certain vision about narrative each time when I work on a piece, in terms of filmmaking and novel writing. I don’t want to waste time on trivial matters and small vision stories. Although one might say there is no such thing as small vision – but nowadays so many short-sighted stories abound in cinema and bookshops, it is an awful industry, I don’t want to engage in that. She, a Chinese is very personal and subjective, other films I made perhaps less so personal, though it was just because there was not a single young girl woman as a protagonist in those films. I may be more interested in a large scale human stories as I grow older….

For more information about Xiaolu’s work see her website and filming diary for UFO In Her Eyes.

The film was shown during this year’s London Comedy Film Festival. All images courtesy of festival’s organisers.

M. Lý-Eliot is a musician and poet, interested in 19th century Britain and East Asia. A keen cook and food blogger, the portrayal of animals in UFO In Her Eyes made her an ever more determined vegetarian