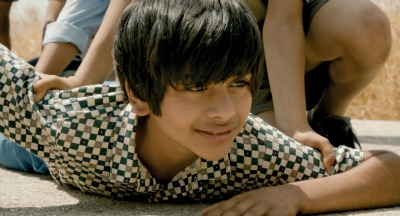 Young Palestinian boy as a vehicle for hope

The Birds Eye View Film Festival this year celebrated Arab women filmmakers. They hail from a region ripe for storytelling, given its rich history and diverse cultures and all the more engaging with the Arab Spring, a movement from the masses to bring about political and social change.

The movement for change poses opportunities and tensions specific to women. On the one hand, online activism and demonstrations provide an outlet and a means for engagement with wider social and political issues. On the other, this creates a clash with the traditional roles and social structures to which women are expected to adhere. By raising expectations of what is possible, it challenges the status quo.

The festival opened with the UK premiere of When I Saw You, a film by Annemarie Jacir who in 2007 became the first Palestinian woman to make a feature film. It is a beautiful meditation on hope in the Middle East conflict.

The film is set in 1967 and centres on a young Palestinian refugee, Tarek, who lives in a refugee camp in Jordan, along with his mother, Ghaydaa. They have been separated from his father in the chaos of war and the film centres on Tarek’s search for his father. Annemarie Jacir’s casting is faultless. Young boy – played by Mahmoud Asfa (left), a refugee himself – in his innocence and optimism exemplifies not only the stubbornness of youth, but also the unrelenting struggle by the Palestinian people for a homeland. In this way, Tarek is both the embodiment and a symbol of a journey undertaken with hope and longing.

He runs away from the refugee camp, much to the distress of his mother, beautifully played by Ruba Blal, and finds himself in a training camp for Palestinian soldiers. Tarek is the canvas on which all the characters seek to write their stories, enabling this forced nomad child to feel part of something amidst the chaos of being a refugee. He was seen as an outsider in the camp he had fled and the fact he was unable to read isolated him from the other refugees even more.

We were told during the Q&A after the screening that the cast are a mixture of refugees and theatre actors. The mix works exceptionally well and the disparate natures of the actors gathered from different worlds exemplify what it must be like when a movement draws in alienated people from all sections of society. This is pertinent as this film is essentially an exploration of what it is like to be without a home and to come together based on a common goal.

On a visit to Israel and the Palestinian territories a year ago, I was overcome with a sense of hopelessness and anger at the oppression experienced by the Palestinian people. The history of the conflict and distrust seemed intractable. I recall being taken around the wall which bisects the territories in which the Palestinians live and makes it extremely difficult for them to see family members, go to work and have a quality of life afforded to those who have the freedom of movement. It is both a symbol and a tool of oppressing the Palestinian people. 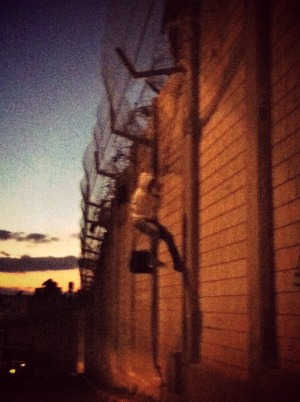 As we were driving, I caught sight of a young boy climbing up the barbed fence (right). The sheer determination he showed in the face of an overwhelming force made him courageous, if not foolhardy.

Witnessing the oppression of the Palestinian people, I felt an all-encompassing feeling of despondency. It is a testament to Annemarie Jacir’s skilful filmmaking that she has managed to carve a story of hope in the situation where one would be filled with despair.

Tarek’s determination cannot be compromised: he goes on, full of optimism and a sense of adventure

The film also provides a nuanced expression of the mother-son relationship. Ghaydaa, managing to be a parent despite being a refugee with no real home, tracks down Tarek but is unable to convince him to return to the refugee camp. Although the audience may expect her to be desperate and look for security by having her son back with her, she sees that she cannot demand this as Tarek’s hurt must be acknowledged. Rather than enforce her will on her son, she waits patiently for him to come back to her and soothes him in his loss. It is young Tarek’s determination which cannot be compromised: in the face of adversity he goes on, full of optimism and a sense of adventure. 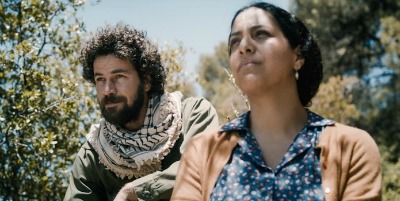 Tarek’s journey is not the only journey we see on screen. While it can be seen as standing for a more symbolic journey of a people that we know about (those many refugee communities looking for a homeland, real or imagined), Ghaydaa also undertakes a journey. Her own grief at losing her husband, hinted at when she states that she wished had got married when she was younger to allow her to have had more time with him, is the beginning of her journey. On her mission to keep her son safe, the audience sees the potential for her to start carving out her own life. There is the growing affection between her and a man at the training camp (above) as well as a sense of solidarity away from the chaos of the refugee camp.

I came away from the film with a sense of hope, a feeling I do not associate with what I know of the conflict in the Middle East from academic sources or from my experience of travelling in the region. The power of art is to make you feel and empathise and hope and dream. I commend Annemarie Jacir for her extraordinary filmmaking and hope that the platform the Birds Eye View Festival gives Arab female writers will allow more people to learn, understand and enjoy the stories and the films from the region.

Pictures one and three are stills from the film, courtesy of BFI. Picture two was taken by the author, used with permission.

Huma Munshi is a feminist, trade unionst and occasional writer. She is keen to use the medium of writing to campaign for change and tweets @huma101.