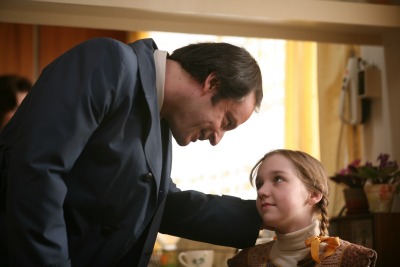 It’s 1976 in Manitoba, Canada. Women’s liberation is gaining momentum, Dolly Parton is riding high in the world of song and 11-year-old Elizabeth Gray has things of importance on her mind.

Initially her main concern is herself or, more specifically, her body. This is a staple of the pre-teen and adolescent bildungsroman and The Year Dolly Parton Was My Mom is certainly that, among other things. Margaret of Judy Blume’s Are you there God? It’s me, Margaret, which made its debut in 1970, shared Elizabeth Gray’s yearning for an early period and big boobs.

Where Tara Johns’ directorial debut differs from these narratives is in its abrupt swerve away from pre-teen hangups towards more devastating truths. A chance piece of homework and an instinctive decision on the part of her affable and calm father Phil (Gil Bellows, below) have unforeseen consequences for Elizabeth (Julia Stone) and those around her. She is thrust into a new and frightening world, in which no one is who she thought they were. Parents cannot be relied on, friends are unfeeling and unhelpful and Elizabeth becomes increasingly anxious and frustrated.

Not getting the answers she needs from her mother Marion (Macha Grenon) and in the grip of a monumental identity crisis, Elizabeth has an epiphany while watching Dolly Parton on TV and convinces herself that Parton is her real mother. Touchingly, Johns was inspired by her own childhood fantasy that Joni Mitchell was her real mother.

At the heart of the story sits a number of intertwined themes: puberty and the desire to fit in, to understand one’s place in the world and to be content with it; what makes a mother; the importance of female role models to young girls. There are three women in Elizabeth’s life: her mother (a quiet, conservative housewife with a slightly icy exterior), Stella (her friend Annabel’s mother, an earthy hairdresser and women’s liberation activist) and Dolly Parton.

Johns fleshes out Parton’s character, using a series of archive clips and interviews

The characterisation of Stella (Rebecca Croll) and Marion is one of the ways in which John’s film defies convention. It would have been easy to set these two very different women against each other, to have them fight for the soul of the confused Elizabeth while attacking each other’s life choices simply in order to prove a series of points about women’s roles and feminism. But Johns’ should be applauded for having avoided that path entirely. Not only are Stella and Marion thoroughly absorbing, complex, fully realised characters, they are also not in competition with each other. 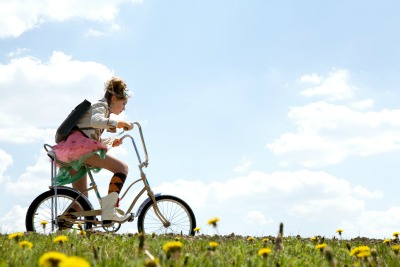 Stella, in addition to being a feminist, encourages Annabel and Elizabeth’s devotion to Dolly Parton, recognising her as a “good businesswoman” and “a trailblazer”: a phrase repeated deadpan by the precocious Elizabeth later in the film. Marion, seemingly wishing to keep Elizabeth a child for as long as possible, has her own reasons for clinging to the past.

When we first encounter Stella, she is joining in Annabel and Elizabeth’s spontaneous and joyous rendition of ‘Jolene’. We next see her proudly watching herself at a rally on TV, as the girls watch in excitement and her husband prepares the evening meal.

Marion, by contrast, is shown fussing over Elizabeth and her homework and preparing food in a gleaming kitchen. Stella has an unruly mop of hair and a maxi coat; Marion has immaculate waves and tidy, conventional clothes. Stella exudes Betty Friedan by way of Carole King, whereas Marion exudes Martha Stewart by way of Nigella Lawson. Having set this up in the first 15 minutes of the film, Johns then spends the rest of the film challenging the viewer’s assumptions about these two women.

In a similar vein, the character of Dolly Parton is introduced as the buxom blonde pop star of the day. Johns begins with this cartoon public image of Parton, relying on the physical rather than the musical. But as the film progresses, Johns fleshes out Parton’s character, using a series of archive clips and interviews in order to have Parton interact with the other characters.

From Stella’s approval of Parton as a “good businesswoman” to the acknowledgement of Parton’s skills as a prolific and talented songwriter to Marion’s realisation, when coming across a typically frank Parton radio interview, that there is more to Dolly than meets the eye, Johns’ subtlety challenges stereotypes not just about Parton but about female performers more generally. Johns (left) wrote the film before seeking out Parton, whose permission she needed to make it happen. Not only did Parton give Johns permission to use her name, image and music but she also helped pave the way for the new versions of her songs incuded in the film. Besides three Parton performances (‘Love is like a butterfly’, ‘Through the looking glass’ and ‘Ruby rides’), the soundtrack features new versions of Parton songs and original material by Martha Wainwright, Coral Egan, The Wailin’ Jennys, Nelly Furtado and Geneviéve Toupin.

Soundtrack and themes match and complement each other throughout the film

Although The Year Dolly Parton Was My Mom tackles difficult issues, it manages to stay on the right side of sentimental. Julia Stone as Elizabeth is gawky and gauche rather than cutesy and self-assured and the film’s narrative avoids earnest self-revelation. A good example of this would be Elizabeth’s meeting with Jean, a Chinese immigrant played by Mung-Ling Tsui, on her journey to Minneapolis in pursuit of Dolly. There is a neat irony in Jean’s decision to adopt a western name in order to fit into Canadian life, given that Elizabeth is going under the name Ruby at the time, a name she has adopted as part of her new identity as the long lost daughter of Dolly Parton. When Jean takes the reluctant girl on a short journey in order to explain the concept of a totem, no sunsets or rainbows appear, there are no tears of joy. Instead, Elizabeth’s response is as sulky and underwhelmed as the average 11-year-old’s when dragged off for an educational visit during the summer holidays.

While it poses a lot of questions, The Year Dolly Parton Was My Mom is refreshingly short of answers. This is a film for which self discovery is an ongoing process and one not just limited to children. It’s a process that will take the characters longer than the film’s 95 minutes to complete and while Elizabeth may have made a start by the film’s end, it’s also clear that she recognises that what she has discovered is only the beginning. The use of Parton’s song ‘The Seeker’ throughout the film reinforces this impression both neatly and effectively: just one of many ways in which soundtrack and themes match and complement each other.

The Year Dolly Parton Was My Mum is released on DVD by Peccadillo Pictures.

Cazz Blase’s dad is a big Dolly fan, he also likes Emmy Lou and Linda. Cazz is a Dolly dilettante but has some vaguely surreal and fond memories of dancing to ‘9 to 5’ at post riot grrrl club nights Get In! and Shake-o-rama! in Manchester in the early 2000s