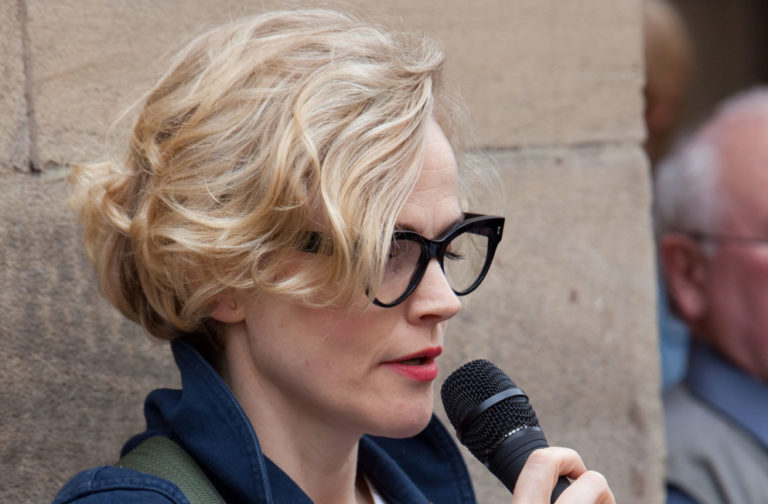 Shelley’s poem The Masque of Anarchy was inspired by The Peterloo Massacre on 16 August 1819. That day, over 60,000 peaceful protesters gathered in St. Peters Square Manchester. This was a time of mass protest and rising political tension, when only 2% of the population could vote and hunger was rife. The protesters demanded universal suffrage and equal representation. It was the biggest demonstration of its kind and terrified the establishment.

Local magistrates watching from a nearby window panicked at the sight of the demonstrators. Believing there could be a riot, they read the riot act and ordered the crowd to disperse. The local Yeomanry were sent in to arrest the speakers and charged the crowd. The resulting panic was interpreted as the crowd attacking the Yeomanry and the cavalry was sent in, armed with sabres. Sixteen men, one woman and one child were killed, while over 700 people injured.

The term ‘Peterloo’ was intended to mock soldiers who had attacked unarmed civillians by echoing the term ‘Waterloo’, the soldiers who fought in that battle being seen by many as genuine heroes.

As well as inspiring Shelley to write his landmark poem about non-violent resistance, the atrocity of The Peterloo Massacre is credited by historians with helping win ordinary people the right to vote.

A recent edition of The Culture Show, Maxine Peake: Performance, Protest and Peterloo has focused on Peake’s delivery of Shelley’s poem for the Manchester International Festival (MIF) last month. It is ostensibly about the actor and her own political journey but also a fascinating look at the Peterloo Massacre and protest politics in general.

As someone who wasn’t aware of the Peterloo Massacre before this programme, I find the background to this terrible event very interesting: Shelley wrote The Masque of Anarchy in 1819, but it was considered so dangerous and radical that it was not published until 1832, ten years after Shelley’s death. The poem’s last line “we are many, they are few” has continued to inspire protest movements ever since. “It feels like a cry of every generation, how the poor and the dispossessed bear the brunt,” says Maxine.

The programme also looks at Maxine’s political background. “My granddad always said politicians are frustrated actors, maybe I’m a frustrated politician,” Maxine says of herself. She joined the communist party in Salford aged 18 and has been politically active ever since. Now she is a trustee of the Working Class Movement Library, which is featured in the programme. Maxine describes this honour as “one of the proudest moments of my life”.

Along with this, Maxine tells presenter Miranda Sawyer how these political beliefs affect her choice of roles: “I will always pick work that I believe has a social conscience. It doesn’t mean I have to play the goodie or the leftie… that doesn’t bother me… as long as the story says something to me.”

Touring the Working Class Movement Library, the two women look at the archives from the Peterloo Massacre, including artwork depicting the tragedy and details of the inquests of those who died. You can see Maxine’s strength of feeling about the events of Peterloo. When asked by Miranda for her thoughts, she says: “The scale of it is quite breathtaking… I feel horror and I feel anger, a lot of anger…that this could happen, that the authorities can get away with this sort of behaviour.”

The programme also looks at other forms of protest through theatre, including a new show staged at a secret venue called Manchester Sound: The Massacre, which gives a unique look at the changing face of protest in Manchester, from the Peterloo Massacre to the acid house music scene in the late 1980s and includes extracts from The Masque of Anarchy. Manchester Sound writer Polly Wiseman explains to Miranda Sawyer why it was included:”It has a beat to it. Shelley knew what he wanted was for someone to stand up in the pub or on a street corner and read this poem out so it has a very strong driving rhythm which actually fits quite well with the rave music…”

Addressing what she expects the audience to take from the show, Wiseman explains:

The thread throughout is the idea of protest and people standing together to change things. Whether that’s the 1819 protesters, the [19]89 ravers or us now in 2013. I suppose I think it’s become quite easy to just click a button, sign a petition online, like someone’s Facebook status or retweet something… I’m not sure that changes anything in the same way that a group of like minded people coming together does.

Sawyer also meets Billy Bragg to discuss the power of protest and he makes an excellent point when discussing the cynicism that often affects left wing politics:

If the people at Peterloo had felt like that, ordinary people might still not have the vote.

The programme ends with a short clip of Maxine performing The Masque of Anarchy. Even just those couple of lines look like a powerful and stunning performance. And one I’m sorely disappointed I never got to see.

Details on how to vote on a set of memorial design proposals for the 2019 memorial can be found here. (The designs will be presented to Manchester council in September.)

Maxine Peake holds a microphone and reads from the list of the dead at the Peterloo Massacre anniversary event 16 August 2013. By Pete Grubb (GrubbyPix), shared under a creative commons license.