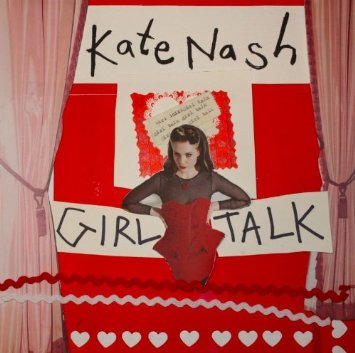 New Review: What Kate did next

Kate Nash first entered public consciousness in 2008 with her keyboard led tale of a relationship gone bad, ‘Foundations’. Since then she has taken up the bass guitar and is embracing her inner angry grrrl. Hayley Foster da Silva salutes the punk attitude evident in Girl Talk

Girl Talk, which was released earlier this year, is the third album from Kate Nash. Self released with the help of a pledge music campaign, Girl Talk shows a whole new side to Kate Nash; this album is about independence, fierceness, but also lost love and friendship.

Girl Talk is a great title for this album as it feels almost like reading entries from a girl’s diary. Kate is proving to be a great new role model for young girls through her music but also all the things she does outside of her music. She’s helped young girls discover musical talents through her Rock N Roll After School club for girls and has made no secret of identifying as a feminist, a subject that is also mentioned throughout Girl Talk. She also insists on having female sound engineers and as many female crew members as possible to assist with her work.

Anyone looking for another ‘Foundations’ won’t find it here. That’s not to say there aren’t any catchy melodies in the album. Songs like ‘Ohmygod!’ which is almost sixties girl group like with its ‘ooh oohs’ in the background and the album’s first single ‘3AM’ are two that can surely boast of that.

Image is the sleeve to Kate Nash’s Girl Talk. Sleeve shows Kate at the centre of a design of red and white cut and paste collage work. The collage is surrounded by peach curtains