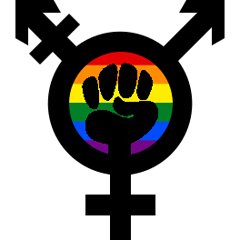 Now I realise that, as an opener, that statement has probably helped someone playing some kind of ‘online feminist mob’ bingo to get a full house but there you are, it’s true. And it’s not as complex as some people would have you believe.

Here it is in the simpler terms. In most societies, lesbian, gay and bisexual people get discriminated against. If they are also trans they get discriminated against on (at least) two levels. It follows that if they are cis (i.e. not trans) they enjoy a level of privilege over trans people. The way heterosexual people enjoy a level of privilege over them.

Further to that, it is important that we think about how our oppression informs the way we might oppress trans people as well as how that experience might point to some common ground.

You’ll notice that I’m using the initialism LGB and not LGBT. In this I am following the lead of a number of organisations and individuals who campaign against homophobia, and who hold that gender is a vastly different issue to sexual orientation, and the two must remain discrete.

It seems terribly important to some cis LGB people that this distinction is maintained.

Never mind that anyone transitioning is likely to find that their sexual orientation (or identity) is affected.

Never mind that, for example, a heterosexual trans woman could previously have been perceived as a gay man – meaning a change in perceived sexuality as well as gender.

Never mind the incredibly disparate issues that affect gay men, lesbians and bisexual people respectively, often with little overlap, but that do not seem to bar us from enjoying the solidarity of a common identity.

The idea persists that the T shouldn’t be there. Trans is different. Trans is another issue. Trans is its own battle. Trans isn’t us.

Comparing notes with some trans friends a few days ago, I was struck by the marked similarity in some of the bigotry we’d experienced. As a cis lesbian I have repeatedly been told by heterosexual people that I’m confused. I think I like girls, sure, but that’s down to maladjustment, low self-esteem, perhaps a negative experience with a man in the past? Conversely I’ve also been labelled a danger to impressionable young girls, as I am clearly hell bent on corrupting as many of them as possible to my own sordid lifestyle. I have been painted as a predator, likely to spring on unsuspecting heterosexuals. Peers of mine have been warned off me as a dangerous influence. It has even been suggested that I ought not to share a public changing room with “normal” women, because my presence “will make everyone uncomfortable”.

And wouldn’t you just know it? The trans people I was talking to reported the exact same themes in the abuse they get.

From within the LGB community.

More specifically (but not exclusively), abuse like that comes from the subset of radical feminist lesbians often colloquially known online as TERFs (Trans Exclusionary Radical Femininsts.)

And isn’t that just the strangest thing?

It’s those exact same disparagements and accusations. Trans people are called confused, sick, a corrupting influence, likely to assault, not safe to be in a public toilet with.

I’m pretty sure I’m not the only cis lesbian to have experienced those. I’m reliably informed that they are all pretty much par for the course. It can therefore be safely assumed that those cis lesbians (and gay men, and bisexual people) who so vocally claim that trans women are likely to try and rape women in public changing rooms, who insist that trans men are confused lesbians who feel forced chasing heterosexual privilege, who scoff at ‘genderqueer’ as a ridiculous new fad despite the concept of transcending the gender binary being as old as humanity, have had those exact accusations flung in their faces.

Of course we have. That’s why the idea of including that T on the end of the initialism makes us feel uncomfortable. That’s why we render those in our community who are both trans and LGB invisible or worse, misgender them and by extension exclude them from our ‘club’.

It’s because we’ve been fighting it since before the birth of the gay liberation movement: that terrible, awful, dreadful accusation that we, lesbian gay and bisexual cis people, might be suffering from gender confusion.

We’ve all had those comments: “She just wants to be a man” “He should have been born a girl.” “You’re a sissy” “A he-she” “Too butch” “Too camp”. The idea of gender variance has been used to belittle and deny the identity of cis queers for centuries.

It seems that, as a result, our default position is to read “trans” as an insult. To view it negatively. To edge away from issues of gender variance in our self advocacy and campaigns for equality. After all, the bullies are the ones who call us gender variant. We don’t want to prove the bullies right.

But we can be better than that.

We are lesbian, gay and bisexual. We are queer: we know this stuff. We understand the harm that is done when our identities are used as casual insults. We can discuss, with the greatest nuance, the problem with phrases like “so gay” and “no homo”.

We know that it is wrong when we are told that we shouldn’t be in public toilets, when we are labelled confused, sick, dangerous, pitiable. We know that those insults indict those who hurl them more than they define us.

We know that the correct response, when a heterosexual ally is accused of being “gay”, is not “how dare you call me that?” but “how dare you insult my friends?”

We have so much in common with trans people.

It should be so easy for us to understand.

[Image by our very own Helen G, formed from three public domain images. It is used with permission]