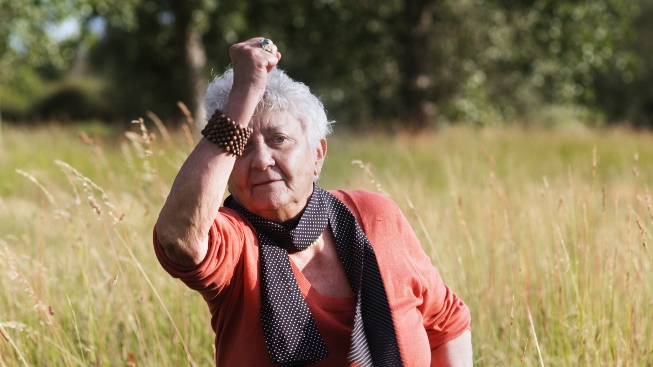 After the opening shot of a chick being removed from its shell by human hands, I was worried that Sébastien Lifshitz’s documentary Les Invisibles would leave me with a similar impression as that given by his 2000 film Come Undone (Presque Rien) – a gorgeously shot but ultimately rather clunky piece of indie queer movie making that, I felt, broke little new ground. However, what emerged this time was a more subtle examination of the kinds of gay experiences too often ignored by the mainstream LGBT scene and media – a tribute to the eloquence and honesty of the subjects interviewed.

Monique, one of the subjects of Sébastien Lifshitz’s ‘Les Invisibles’.

Lifshitz chooses a mixture of women and men, coupled and single, in dialogue and monologue and sharing their personal photos, to examine not only the last half decade or so of lesbian and gay French life, but to shine a light on what it is to live as an older queer person in a society that negates and mocks the sexuality of the over 60s, and in a gay community that frequently fetishises youth to an unhealthy extent. The participants range from the wealthy, sheltered Christian to the 83-year-old goat farmer Pierrot, from those who always knew to those who came out in their middle age or older. No single explanation is given as to the why of homosexuality, with Therese favouring a Freudian interpretation of polymorphous perversity and Monique believing that her lesbianism is an innate part of her biological make-up. Annoyingly, though several of the interviewees talk about being bisexual (in identification and/or practice), the promotional material itself refers solely to homosexuality.

Ideas around the intersection of class and sexual freedom are given due weight. I very much enjoyed just how much time was spent detailing the importance of feminist engagement and the broader links between women’s liberation and gay liberation. The societal pressure pushing women towards compulsory heterosexuality and the suffering that entails – both physical and emotional – is a particular point of interest. Bodily autonomy is not a concept reserved for same-sex relationships – the need for all women to have access to effective contraception and safe abortion is passionately asserted. 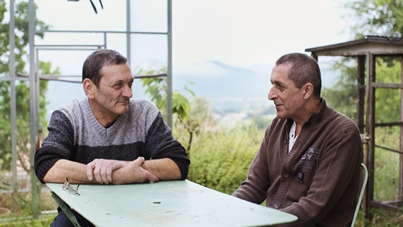 Despite these plus points, and the director’s insistence that he wanted to bring “as much diversity as possible to the film”, I was sad to find that all of the subjects interviewed were white, and none of them were trans. The lack of racial diversity becomes particularly apparent when Christian’s ‘escape’ from his family to pursue charity work in Africa is discussed. The fact that the only people of colour shown are in still photographs, or briefly in a street shot, described as a massed group of “exotic” others desired by a repressed white man, is not acceptable in a documentary that purports to show the diversity of French queer life.

Lifshitz’s repeated use of nature shots, the unobtrusive soundtrack, lack of audible or visual presence of a narrator/interviewer, the naturalistic style of editing, all go towards creating a beguiling impression of documentary as objective observation only. It makes the lack of racial diversity doubly distressing, as it would be easy to walk away from a film like this forgetful of the role of the director in picking and choosing the narratives and facts on display.

Still, in terms of the narratives explored, and the interviewees themselves, there is much to love here – I would have been quite happy had it been three times as long. Homophobic injustices and the pressures of marginalisation are not glossed over – abuse, mental breakdown and workplace, political and police discrimination are all touched on – but also the joys of being able to forge a more individual path. As Elisabeth, now the Mayor of her district, says: “marginality made us free”. Many of the interviewees stress the importance of collective action and coming out, not just as a way of improving the status quo but as a form of self-acceptance, of naming themselves to a society who tried to pretend that they didn’t exist. There is the undeniable sense of listening to the queer grandparents you always wished you’d had – the film would certainly make a great addition to an LGBT youth group/university group library.

The theme that stayed with me the longest was that of pleasure – pleasure as a political act, a spur to self-knowledge, an ethos – and how each subject approached the fears and realities of aging in relation to it. The grief of no longer matching up to popular ideas of beauty and desirability is not denied but I was surprised and delighted by the stories of resistance to that attitude. Pierrot’s refusal to settle down and his belief in the power of sex to keep a person young is refreshingly frank. Bernard and Jacques, starting a new relationship together in their 70s (helped by members of their family), are a lesson in not assuming that experience could dampen the enjoyment of seeing the world with a new lover.

Ultimately, I found Therese’s (pictured above) words the most moving: her recollection of falling madly in love at the age of 77, her desire to keep an open mind about where attraction and affection might take her. It was wonderful to be able to listen to an older person describe the possibilities before them, and I wish it were a more common occurrence. Les Invisbles has its flaws, and they’re not minor ones, but it is still very much worth watching – the men and women interviewed have too much to give and to say to be ignored.

The film is released on DVD by Peccadillo Pictures.

CN Lester is a classical and alternative musician, writer and activist and can be found on Twitter @cnlester and on cnlester.wordpress.com