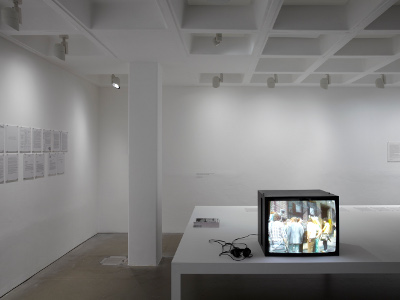 Zen and the art of rubbish bin maintenance

The quotation that is bandied around in Galleries Two, Three and Four of Bristol’s Arnolfini Centre at the moment is a puzzler. “After the revolution, who is going to pick up the garbage on Monday morning?” The exhibition of the work of Ukeles, a feminist performance artist, is a documentation of her attempt to engage with this idea, but for me, it raises rather more questions than it answers.

Ukeles’ idea of making the day to day chores of life an art form came to her in 1969 when she first became a mother. In her manifesto ‘Maintenance Art – Proposal for an Exhibition’, she states:

I am an artist. I am a woman. I am a wife. I am a mother. (Random order). I do a hell of a lot of washing, cleaning, cooking, renewing, supporting, preserving, etc. Also, (up to now separately) I ‘do’ Art. Now I will simply do these everyday things, and flush them up to consciousness, exhibit them, as Art.

She contrasts the “masculine” role of creating with the “feminine” role of maintaining: keeping both life and art going every day. She is interested in the unthanked service roles performed by women and also in the service and maintenance industry as a whole where jobs were and are largely male-dominated.

Maintenance Art Works, curated by Krist Gruijthuijsen, is a collection of photographs, documents and videos recording the work Ukeles undertook during those years. It is an often eclectic and sometimes surprising array of works, at times difficult for a layman to understand. I come from a performing arts background, so I thought I’d be able to grasp her work quite easily. Turns out performing arts and performance art aren’t quite as synonymous as I’d envisaged.

Beginning with a copy of her manifesto and following it up with photos of the artist doing day to day household chores in her roles as wife and mother, the first gallery space is sparsely decorated, though with a good deal to consider. Particularly interesting from a feminist perspective was ‘Personal Time Studies: Log’ (1973), where Ukeles details all the day-to-day activities that she considers maintenance: a clever way of showing the unappreciated work that she was involved in as a housewife and mother. At times, she even compares the rituals of sock-folding and sweeping to Zen Buddhism, although I’ll admit that this went a little over my head and may seem a little pretentious to the casual visitor.

It was Gallery Three where I first started to feel a little uncomfortable. This space is too vast to do the photos justice – a huge white room with nothing to draw the eye to the small photographs and scrawled notes, leaving the visitor feeling on display themselves. Much of the artwork here is a reflection on Ukeles’ more personal conflicts. In particular an artwork where she exchanged a pot of earth from her hometown with earth from the museum in Jerusalem where she was working is an interesting attempt to connect her personal home and work life. This theme – of being conflicted between her work as an artist and her duties as a mother – is further explored in the most explicitly feminist pieces in the exhibition, ‘It’s OK to Have a Babysitter’ (1974) and ‘Fall Time Variations I-III’ (1974). 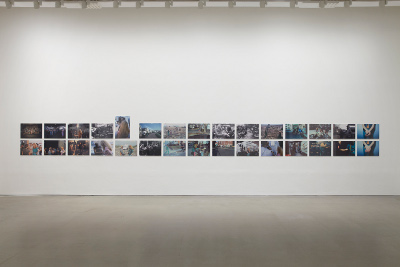 The former is a piece of performance art created when Ukeles was working in Boston and her children were at home with a babysitter in New York. Very much of its time, the piece shows the frustration of a woman seeking validation for her family-based work and acceptance for being a working mother. In a piece where she walks back and forth across a performance space, writing mantras almost as a penance for daring to have left her children at home, she writes: “Some kinds of maintenance cancel out others… If I write it enough times, maybe it will become true.”

Meanwhile, created in the same year, ‘Fall Time Variations’ is a piece of maintenance art concerned with a single tree in autumn. Ukeles tries, at various points, to preserve the leaves as they fall; to clear a space from the leaves and keep the tree “pure”; and to take leaves and pair them with locks of her children’s hair. By envisaging the tree as a mother, she celebrates a cis woman’s maternal, life-giving role – and at the same time, cleverly dissects the idea of this nurturing role being known, in gardening terms, as “husbanding”. (Entertainingly, she calls the poem she recited while cleaning away the leaves ‘The Trees Are Having Their Period’. I shall leave it to the reader to discern why.)

Dominating one wall of the gallery and the entire next room is Ukeles’s most famous project, ‘Touch Sanitation’. Over one year she shook hands with 8500 sanmen – or bin collectors as we know them in the UK. With each sanman – and all the collectors who we see her talking to are indeed men – she thanks them for “keeping New York City alive”.

The Arnolfini has collected photographs, letters and two hour-long videos of this work, and they are well worth a look for what they say about public opinions of sanitation work and maintenance. However, regardless of the artist’s good intentions, it is undeniable that there is something deeply uncomfortable in seeing a middle-class white woman telling a group of working class men paid a small pittance for a difficult, demanding and dangerous task that they are “doing a good job”. They know that they are and say as much at various points.

Watching the videos of Ukeles addressing the assembled workers looks like nothing so much as a well-meaning headteacher speaking fondly to a group of sixth form students about how proud she is that they’ve kept the refectory clean. Unfortunately, after half an hour of watching the footage – different sanmen explaining that they felt as though they were treated like trash themselves by the community and Ukeles telling them that their role is necessary – it seems more like watching something that might be aired on Channel 4 under the title The World’s Least Enjoyable Jobs than watching a piece of art that is liberating for everyone concerned. In fact, it seems like class pornography. 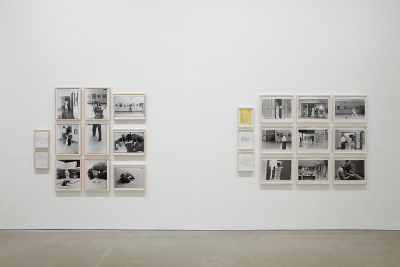 Undoubtedly, Ukeles makes an important point with her celebration of maintenance but it was the comment from another visitor which struck me the most as I considered a picture of her clean and neat hands outstretched to those of a sanman: “Anyone with the time to make art is coming from privilege.” It may well be true that Ukeles’s art is the same as that of you or I when we brush our teeth or clean the toilet, but the fact remains that while she can make ‘Touch Sanitation’ and get government funding for it, the men she is talking to are living it day-to-day.

While it may get a smile to think that changing a nappy is artwork, it won’t pay the bills and it certainly won’t help someone living on the breadline, working the jobs she consider such a noble calling. Calling for respect for the sanmen was certainly an admirable aim, and an attempt to draw attention to those who need it should not automatically be dismissed as jumping on a bandwagon but with the benefit of hindsight it is uncomfortable viewing for the modern spectator.

This, I found, was the overall issue I had with Maintenance Art Works. As an exhibition of work from the 1970s, art historians will love this. It is a very honest exhibition, exploring the work of a feminist artist without judgement or much editing. Looking at it without knowledge of the time, however, it’s difficult not to feel patronised. Second wave feminism has a home here, proudly displayed among artwork exploring religious identity, patriarchal structures and classist dogma, and it is certainly beautifully photographed and framed. If you’re in Bristol with an hour to kill, you could do worse than pay it a visit – and maybe you can make more sense of the photographs of her socks than I can.

But I am not a mother and I am not a carer. I haven’t got the time or money to consider cleaning my toilet an artwork. I don’t do it for art. I do it to live. So where, in Ukeles’s eyes, does my maintenance fit in?

Maintenance Art Works 1969-1980 is at Arnolfini, Bristol until 17 November. Entrance is free and there is an exhibition tour every Saturday at 2pm.

Abbi recommends Feminist Art and the Maternal by Andrea Liss for anyone looking for more exploration of feminist themes in Ukeles’s artwork.

Picture 1: A television showing an image of a crowd sits on a white table on the right side of a white room, which is otherwise fairly bare, with a white pillar in the middle and some pictures that cannot be made out on the left wall.

Picture 2: Thirty photographs on a white wall, arranged in two rows of 15, where all are landscape apart from the fifth one in the top row, which is portrait. They are too distant to distinguish the subjects of each photograph.

Picture 3: Two groups of photographs on a white wall. Both groups are of nine black and white photographs, too distant to distinguish the subjects.