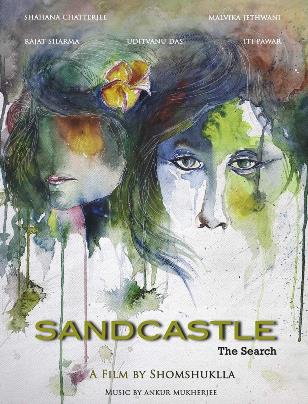 Marta Owczarek, who has been contributing to our music reviews section recently, watched Sandcastle during recent London International Film Festival and reviews it for The F-Word.

Marta also got to interview the film’s creator Shomshuklla, “an impressive figure: a playwright, actress and director with her own theatre company Kali Theatre, a prolific poet with many published volumes and a famous classical Indian and Indian pop singer as well… She came up with the story of Sheila, a modern upper-middle class Indian housewife who seems to have it all but yearns for a writing career, authored the script and directed the feature, all for the first time in the service of the Tenth Muse.”

You can find more information on the Sandcastle’s website.

The image is a cinematic poster for Sandcastle, a watercolour of two female faces, taken from the film’s Facebook fanpage.