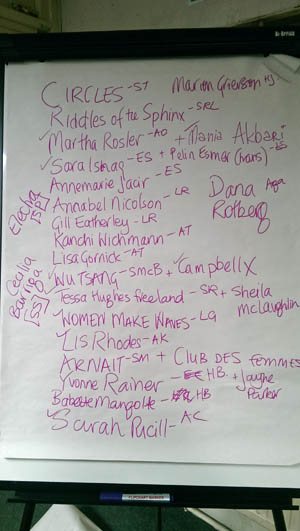 Changing the world, one feminist filmmaker on Wikipedia at a time

Have you ever looked up your favourite film online and found… absolutely nothing? That’s the case for far too many classics of feminist film.

A founding myth of the first ever ICA wiki-a-thon that took place on Friday 25 July was precisely that. Moving image artist Sarah Turner, one of the organisers and participants of the event, recalled how, during a car journey, she was talking to a friend about Sheila McLaughlin’s 1987 film She Must Be Seeing Things he had not seen. As they arrived at her office, she started her PC wanting to show him the McLaughlin’s Wikipedia page… that wasn’t there. [It is now!]

Last Friday, we took over the ICA Studio from 12 to 5pm. First on the menu was a Wikipedia editing workshop, where, assisted by three Wikimedia trainers, we created or updated Wikipedia pages for feminist filmmakers, films and organisations. All 18 contributors proved themselves perfectly capable of mastering Wiki markup (no, it really isn’t that hard but doesn’t it sound good?) and in three hours we created lots of new exciting feminist Wiki content.

The workshop was followed by Friday Salon with academics, filmmakers and curators. Chaired by Sarah Turner, speakers included Elinor Cleghorn, Elizabeth Cowie, Sophie Mayer and Lucy Reynolds. To top off this amazing day, we watched the film that started it all, She Must Be Seeing Things introduced by Selina Robertson of Club des Femmes: a gem of a film that caused much controversy among feminist audiences when it was originally screened in the 1980s (as Ruby Rich attests, at a London screening some women tried to rip the film from the projector after calling it “pornography”). ICA audience was much better behaved. 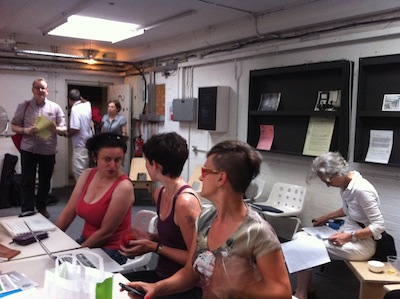 The morning after brought about a reality check: some of the entries we had created were flagged up by Wikipedia community as “not notable”. We still need to learn that even though anyone can edit Wikipedia, there are numerous rules in place policed by the not-so-invisible hands of other editors. Wikipedia is like life itself: some people around here are not sympathetic to feminist issues in general and feminist cinema in particular. We need to create and edit entries with extra caution, making sure we fulfill all the criteria, of notability and beyond. Practice makes perfect.

In fact, we liked it so much that you should watch this space for the details of upcoming Wiki-a-thons. In the meantime, it is very easy to create your own Wikipedia editing account and the introductory tutorial includes all you need to start sharing your knowledge about.. just about anything.

If you would like to contribute to the feminist filmmaking cause, here are some suggestions to start you off.

Thanks to Simon McAndrew for his comment that prompted me to blog about ICA Wiki-a-thon.

First picture is a whiteboard listing Wikipedia pages and editors creating/expanding them. Second picture is feminist Wikieditors in action, in red top director Lisa Gornick. Both pictures used with permission.

The title of the post is borrowed from Sophie’s FB wall.