When a vampire wears a chador

A movie about a cloaked female vampire with a love of synth-pop and skateboards… Oh, to be a fly on the wall at that pitch. Ana Lily Amirpour’s debut has been wooing the film festival scene since its premiere at Sundance in 2014. It has kept its traction with further festival outings from Hawaii to London, reinforcing its popularity by word of mouth – a crucial marketing tool for a film that’s hard to classify.

A Girl Walks Home Alone at Night casually picks at the shelves of our most cherished genres. A demure, lonely girl with a fancy for bad blood has the vampire box checked, whereas the vacant sandy roads of Bad City unfolding to the low twangs of a 1960s guitar affirm the film’s ambitions of being a Western. But Iranian director Ana Lily Amirpour adds a delicious spice to this medley by creating a deadpan world of machinery and death. Huge factories sulk on the horizon and countless carcasses fill the deep dusty pits by the long roads to nowhere. Chicly shot in black and white by Lyle Vincent and accessorised with slick synths and a heady bass score, this vampire revamp is fiercely modern yet an instant classic.

The film introduces the most interesting among its dramatis personae before it kicks off the plot. Saeed ‘The Pimp’ (Dominic Rains) is perfectly despicable and has branded himself with an ill-advised tattoo that reads “Sex” across his neck. What you see is what you get with this over-groomed tracksuited cad. He supplies the dope that’s chipping away at the life of Hossein ‘The Junkie’, a tubby aging heroin fiend and punter to Attie ‘The Prostitute’. Hossein’s comely son Arash (Arash Marandi) brings the light into this otherwise gloomy bunch and finds himself at the whim of Saeed when trying to pay off the debts accumulating from his father’s vices. ‘The Girl’ (Sheila Vand) is the perched observer of this circle of sin and her hunger for comeuppance doubles as a thirst for fresh blood.

As is the case with any vampire, it’s not just blood she craves. She’s lonely – and at peace only in the confines of her bedroom, plastered with 1980s pop posters and loud music. After another night of prowling the shady streets, her curiosity in Arash (fresh from a party and high on party pills) spares him from having the life sucked out of him. The Girl’s got taste – Arash is an Iranian James Dean and smokes up the screen with his bottom lip, heavy with the weight of a cigarette stuck in the middle of a juicy pout. He’s shy, but high on artificial confidence he soon finds himself swooning helplessly to the bass of The Girl’s record player in a two-person after party. The pair’s union is all the fuel they need to leave this undeserving city even though Arash is unaware of the true motives of his new friend’s escape plan. 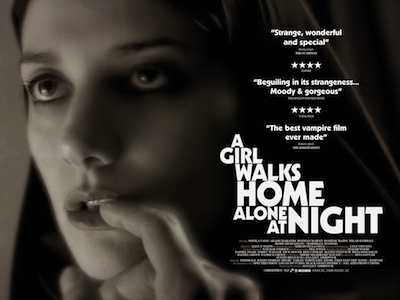 Jezebel hailed A Girl Walks Home Alone At Night as a “feminist vampire movie” and unsurprisingly so – a film with a predatory woman hunting men is bound to make critics raise the issue of ‘gender politics’. However, this “feminist” branding has never come from Ana herself, despite the undertones of chauvinist vengeance taken by The Girl; that is perhaps what happens when a woman who cites David Lynch, Lars von Trier and Quentin Tarantino as her favourite directors makes a movie.

Her fixations don’t necessarily lie in the comeuppance of women – she seems far more interested in wallowing in creepy dark worlds for the sake of them. Noting von Trier’s Antichrist as one of her top five movies, she reveals a fascination with “weird shit” and talks about how filmmaking cures her loneliness. In her interview for The Wolfman Cometh she says: “I love all the weird shit, like in Wild at Heart, and Bobby Peru. I just love the creeps.” She goes on to say: “I’m really lonely so when I see the film…it’s weird, because you never truly experience your own film. The making part is so great because it’s not lonely, because all these people are with you to help you do what you want to do.”

The kill-count is low, but the importance of the message is high. The Girl gnarls her spiky teeth at a young lad and hisses a violent command for him to “be a good boy” and we’re certainly led to feel a triumph at the obvious fate of Saeed The Pimp.

The experiences of this film go beyond the screen. Storyboard artist Michael DeWeese created a comic by the same name and the hypnotic soundtrack is available as a special edition vinyl that is sure to find a slot in the record collections of hip cinephile DJs.

A Girl Walks Home Alone At Night is quietly confident, refreshingly genre bending, visually poetic and devilishly funny. The world through Ana Lily Amirpour’s steely, modish gaze is irresistibly dark and leaves a genuine anticipation for what’s to come from this young Iranian filmmaker with a radical streak.

A Girl Walks Home Alone at Night is released in UK cinemas by STUDIOCANAL UK on 22 May.

Both images courtesy of STUDIOCANAL UK.

First picture is black and white and shows a young woman with short hair applying makeup to her right eye which is closed as she’s putting on a dark eye pencil. Her left eye is already made up and open. On the wall behind her there are three posters of what look like film or pop starts and advertising perhaps an event. There’s something that looks like a checked blanket on the right.

Second picture is in sepia and it’s the film’s official UK poster. There’s a close up of a woman’s face on the left (Sheila Vand as The Girl), with her hair covered and wearing dark eyeliner. She’s looking to the right off camera, her mouth is ajar and there are two blurred fingers brushing her lips. They belong to a hand that seemingly is not hers. There’s the film’s title, three headlines from the press praising the film and illegible credits on the right of the poster.