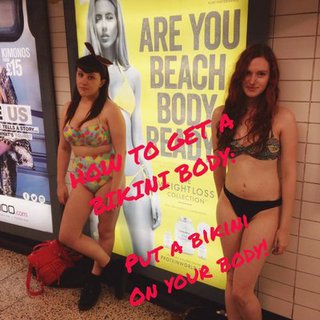 I was labelled a terrorist

Tara is freelance creative who goes by the name Catstello online. She is an aspiring full-time optimist, feminist warrior and beach ready woman. When she isn’t publicly rejecting beauty standards, she is running feminist lifestyle blog, Zusterschap, with her best friend.

You may know me, I recently stripped to make a statement. Although this Protein World’s advertisement is merely just a drop in an ocean of body shaming media there was something about this one in particular that ticked me and thousands of other women off. The image features bold writing asking commuters “ARE YOU BEACH BODY READY?” when it might as well say “DO YOU FEEL RUBBISH YET?”. My new friend Fiona and I made our own body positive statement in retaliation to the advert by standing next to it in our bikinis declaring ourselves already beach body ready. 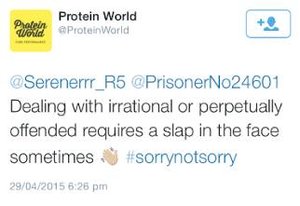 Since the pair of us posted the image, it has gone viral and garnered some very interesting responses. Whenever somebody rejects an ideal or supports feminism in general, they are often met with backlash. Although most of the responses have been positive and encouraging, I have also received a ton of abuse. The insults most often hurled at me are: fat, ugly, insecure, fake and a chubster feminazi. I have also been accused of fit-shaming (which isn’t a thing by the way, nobody thinks you are ‘gross’ if you are fit). I have also had a super detailed and lengthy hate-filled email sent straight to my inbox. But the thing that baffles me the most is people calling me a terrorist.

The definition of terrorism is “the unofficial or unauthorized use of violence and intimidation in the pursuit of political aims.” Re-read that a few times and think about how that can be applied to me, Fiona and the thousands of other women who are sick of being told how they should look every day. I never once condoned violence or intimidation, all Fiona and I did was send a body positive message. We rejected society’s ideals, encouraged women to do the same, didn’t judge others who weren’t against it and have generally handled all this with poise and dignity. Protein World on the other hand have not. They have been publicly shaming feminists, mental health sufferers and generally anybody else who is against their advertisement. 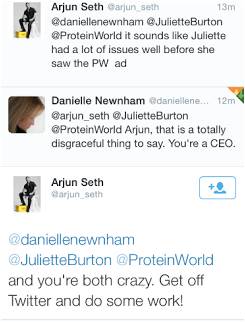 As you may have seen my friend Juliette Burton tweeted Protein World expressing her thoughts on the advertisements and how they can be triggering for other people struggling with their mental health. The most shocking part in all of this is the fact the CEO has openly admitted to taking over the company’s Twitter account and basically shown thousands of people how terrible the company are at public relations. 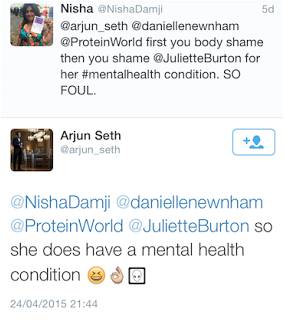 The most infuriating part of all is that at no point during the company’s television or radio appearances has the CEO shown his face. Nor have they been called out for their absolutely terrible behaviour. In fact a large amount of people had no problem with the advert but objected to their disgusting comments online instead. Not only is this completely unprofessional and uncalled for, it’s very dangerous. It’s unacceptable and discriminating against what could be a very vulnerable group. It’s completely irresponsible as his comments have encouraged thousands of people to tweet myself, Fiona and Juliette abuse. It’s not about the adverts anymore. It’s about the company’s disgusting attitude towards women.

Unfortunately, it’s nothing new. Almost every time a woman rejects or challenges an ideal, she is called irrational, crazy, jealous and so on. Why is it that in 2015 being a feminist is still seen as horrifyingly bad – and the ultimate insult? Why are women branded terrorists for wanting equal rights? Why are people so threatened by this?

The uproar, backlash and CEO’s comments have just proven our point even more. The fact that I am being called fat and insecure daily is the exact reason I decided to do this. People’s minds have been clouded by the media for far too long. Women are pitted against each other daily and people have been conditioned to think that physical beauty only takes one form. Other women aren’t my competition, I stand with them not against them.

The longer I am branded a terrorist, the longer I will fight to change these body shaming attitudes.

The first image depicts Tara and Fiona standing in front of a Protein World advert wearing bikinis. It is overlaid with the text ‘How to get a beach body: put a bikini on your body’. The Protein World advert shows a woman in a bikini next to text which reads ‘Are you beach body ready?’ and information on meal supplements. The second image is a tweet from Protein World which reads ‘Dealing with irrational or perpetually offended requires a slap in the face sometimes’ with an emoji of a hand slapping and the hashtag #sorrynotsorry. The third image shows three tweets. The first is from Arjun Seth, CEO of Protein World which reads ‘it sounds like Juliette had a lot of issues before she saw the PW ad’. The second is a tweet from Danielle Newnham which says ‘Arjun, that is a totally disgraceful thing to say. You’re a CEO’. The third is a tweet from Arjun Seth which says ‘you’re both crazy, get of Twitter and do some work!’. The fourth image shows two tweets. The first is directed towards Protein World from Nisha and says ‘first you body shame them you shame @JulietteBurton for her #mentalhealth condition. SO FOUL.’. The second is a reply from Protein World saying ‘so she does have a mental health condition’ followed by emojis of a laughing face and an ‘OK’ hand sign.