SERET 2015 Festival preview: Self Made

Self Made (2014) is the second feature film by Shira Geffen, after her 2007 debut Jellyfish, co-directed with her husband Etgar Keret, won three awards in Cannes, including the prestigious Caméra d’Or. Jellyfish told a story of three women living in Tel Aviv; in Self Made, Geffen uses the idea of intertwined fates again, but this time she looks at two women living on two sides of the Israeli West Bank barrier.

Michal (Sarah Adler) wakes up one morning when her bed breaks down. Her husband goes away on business and she is left on her own; however, she seems dazed and confused, possibly amnesiac, and cannot seem to deal with anything that is happening to her. When she orders a new bed from Etaca (Geffen’s parody of Ikea), it turns out it is missing a screw (hence the original title Boreg, Hebrew for “screw”). Angry and frustrated, she calls the store to complain, and the manager fires Nadine (Samira Saraya), a Palestinian responsible for packing the screws.

The viewer is instantly pulled into Michal’s reality of anxiety and fear, trying to put the pieces of the puzzle together with the heroine

We follow the storylines of the two women, seeing how they are both unhappy and oppressed in their respective lives. Michal, although a successful artist preparing for the Venice Biennale, is obviously having marital problems. She also appears overwhelmed by her life and art, which suddenly seem strange and unknown to her. Nadine’s biggest dream is to become a mother, but she cannot find a husband, as people believe her to be ‘weird’ always daydreaming and seemingly absent-minded. When she loses her job at Etaca, her brother decides to send her to their aunt in Kuwait. Before she leaves, she starts an affair with her neighbour, but wants nothing to do with him after she finds out he is a jihadist, trying to convince her to give up her life for the cause. On Nadine’s way to Kuwait, there is a mix-up at the Israeli checkpoint. As a result, Nadine and Michal trade lives and a bizarre tale of identity-swap ensues. 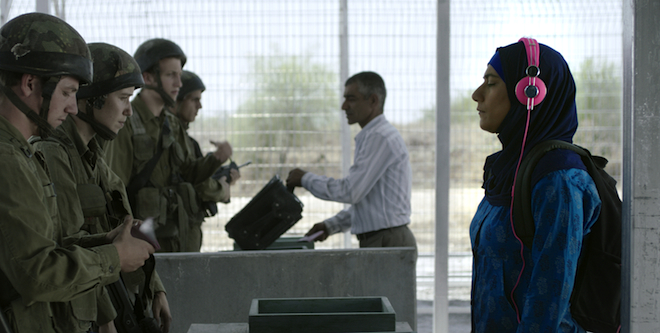 Self Made is an alluring film. The viewer is instantly pulled into Michal’s reality of anxiety and fear, trying to put the pieces of the puzzle together with the heroine, and Nadine’s story is no less gripping. There is also a third woman, who’s equally important to the story, as her actions and decisions heavily influence the lives of Michal and Nadine — a young Israeli soldier guarding the crossing. Working at the checkpoint, she stands at the border between the two worlds of our two protagonists.

One of the major themes of the film is maternity. Michal is categorically opposed to procreation and strongly incorporates this idea into her art; she claims that having children is selfish and suggests, in reference to her most controversial piece of art, that “women love purses maybe even more than their kids”. Nadine, on the other hand, yearns to have a baby, but finds it almost impossible to fulfill her dream. When the two women swap places, this difference becomes crucial.

Evoking magical realism, where even the most unusual events are presented as completely natural, Self Made has an eerie, dreamlike atmosphere

Another important issue is the situation of women in traditional communities and the oppression they face, especially when they do not conform to the socially agreed on ‘norm’. When Nadine opposes going to Kuwait, complaining that the cousins she would have to live with used to hit her when she was a girl, her brother responds curtly: “Maybe you need a beating to bring you back to reality.” Living in her own world, she faces double exclusion: both as a woman and as a person regarded emotionally and mentally unstable. On the other hand, Michal’s story can become a starting point for a discussion on how far an artist can go in creating her art and expressing her beliefs and ideology. Finally, a film set in Jerusalem cannot evade the question of the Israeli-Palestinian conflict. However, Geffen seems not to take any position regarding the issue, merely presenting it and neither condoning nor condemning either side of the conflict.

If I had to choose one word to describe Self Made, it would definitely be “strange”. Evoking magical realism, where even the most unusual events are presented as completely natural, it has an eerie, dreamlike atmosphere. From the visual point of view, the film is truly beautiful, with wonderful photography by Ziv Berkovich. The use of colour is stunning, with the interplay of greys and vivid colours — especially blue, with various hues pertaining to different characters (plain navy blue for Michal and lighter shades, often with floral prints, for Nadine).

Shira Geffen’s latest film is an original and captivating picture. It will stay with you for a long time, making you analyse again and again its many layers of meaning hidden behind this mysterious story of two women struggling to find their true identity. It may not be for everyone, but if you do not mind elements of fantasy, you should definitely give it a try.

From June 11-21, SERET 2015: The London Israeli Film and Television Festival will be showcasing a varied programme of feature films, shorts, documentaries and TV series, created by Israel’s most talented film and television makers, with many enjoying their UK premieres. Book your tickets on Seret’s website

First picture is still from Self Made, courtesy of SERET. It shows a military checkpoint, with four soldiers in uniforms, including helmets, on the left, conducting their checks. On the right in the foreground there is a woman with Arabic facial features, wearing blue shirt and navy blue hijab, a backpack and big pink headphones. Her eyes are closed as the soldier looks at what may be her ID. There’s an Arab looking man in a white shirt in the background, passing his black suitcase for inspection to another soldier.

Second picture is a logo of the festival, with blue lettering “SERET 2015: The London Israeli Film and Television Festival” between two stylised blue olive tree branches, on white background.

Agata lives in Warsaw, Poland, but loves to visit her big sister in London. She works as a translator, proofreader and editor in Polish, English and Spanish. She is a bookworm, film addict and die-hard David Bowie fan