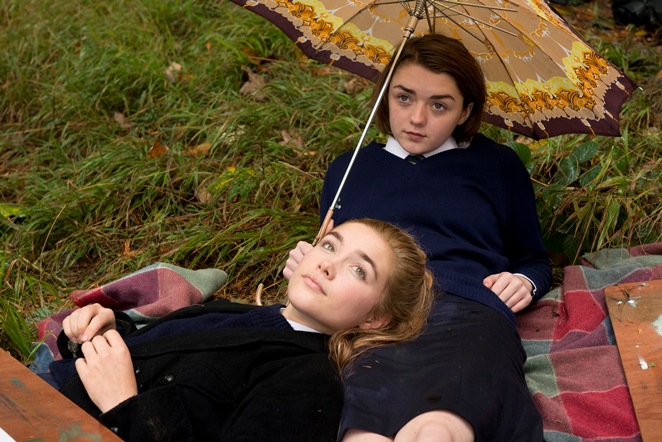 “I resent this idea that we’re just ’emotional’,” says Lydia, one of the heroines of Carol Morley’s debut feature The Falling. This statement perfectly summarises the film that focuses on themes of adolescence, grief, blossoming sexuality and what is ‘real’. Too often, women and girls are dismissed for being too emotional, irrational and melodramatic. Too often, they are ignored or forgotten, like Joyce Vincent, the heroine of Morley’s 2011 drama-documentary Dreams of a Life that made a sizeable splash on the film festival circuit and beyond.

In her sensitively rendered new film, beautifully shot by Agnès Godard, cinematographer renowned for her work with Claire Denis, Carol Morley has given weight to girls’ emotions and feelings instead of belittling or undermining them. Adolescence is a terrifying, transformative time, and the characters give a sophisticatedly nuanced performance as teenage girls negotiating grief and sexual discovery.

The film is set in a girls’ high school in the late 1960s and the audience is introduced to a small friend group within the school, dominated by best friends Abbie and Lydia. Abbie, played confidently by newcomer Florence Pugh, is the natural leader of the group; she is effortlessly beautiful, more sexually developed than the rest of the group and is kind and affectionate to her friends. Maisie Williams is perfectly suited to her role as Lydia, playing her subtly and sensitively in the shadow of Abbie’s louder personality, before becoming more insistent and vocal in the latter stages of the film. Lydia is quite motherly in her relationship with Abbie, and it is clear that while Abbie may be physically more developed than Lydia, Lydia is more mature and thoughtful.

She faints in a luxuriant, almost religious manner, as if she is experiencing a higher form of consciousness

Problems start to creep in when Abbie finds out she is pregnant. Surprisingly, the problem does not appear to be the baby itself, as Abbie is quite forthcoming about her ‘situation’ – rather, it is the sickness accompanying the pregnancy which provides cause for concern. Abbie starts to feel dizzy in class, her face feels tender, her eyes twitch, she vomits unpredictably and begins fainting. During one fainting spell, she starts fitting and passes away at the feet of one of her teachers.

From this point on, the film shows the various ways in which the girls deal with their grief and how they attempt to negotiate the space left behind by Abbie. Lydia becomes more unruly, rebelling against her seemingly neglectful agoraphobic mother (Maxine Peake’s tour de force) and the authority figures at her school. Over time, she begins to exhibit the same behaviour as Abbie: twitching eyes, sensitive face and fainting. She doesn’t just flop to the floor; she faints in a luxuriant, almost religious manner, as if she is experiencing a higher form of consciousness. Ley lines and other such folklore are initially used to explain the fainting. 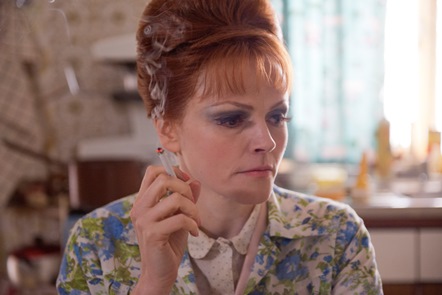 Her friends, her art teacher and a good amount of the other girls in the school begin to faint in the same dreamlike, euphoric manner, leading to the school’s closure and mass hospitalization of the sufferers. Gradually, as no cause can be found for the fainting, the girls are released and the school is reopened, with only the original coven of girls remaining in the hospital. Credence was previously given to the epidemic because of the art teacher’s susceptibility to the fainting; however, it is suggested that this could have been down to her implied pregnancy as opposed to any mysterious virus. Due to increasingly disruptive behaviour, Lydia is expelled from school. She begins to cry in the toilets, asking her friends: “What have I done to you all?” All her friends, apart from Titch, who never exhibited any signs of illness, protest their sincerity in their fainting. Lydia runs home, engages in a bit of (not entirely unpredictable) incest, and has one hell of a reckoning with her mother.

The fact that The Falling is female-centric should not have to be cause in itself for celebration. It is noteworthy because it has a truly one-of-a-kind story, played to perfection by an accomplished cast

The Falling doesn’t shout at you, it isn’t brash, it doesn’t demand attention. Instead, it is lyrical, quiet and calm. The plentiful shots of lush trees, rippling waters and falling leaves contrast the turmoil Lydia and her friends are experiencing after the sudden death of their friend. Tracey Thorn’s score compliments the film excellently, with soaring melody accompanying the motion of the fainting girls until they hit the ground, at which point the music stops abruptly. It lends the air of further mystery to the fainting, giving it an otherworldly aura, an outwardly transcendent experience that couldn’t possibly be faked or copied. The music blends well into the repeated lines of Wordsworth’s poetry.

This complex, mysterious film about the most difficult and changeable period in a woman’s life was executed with great care and restraint. Its impact cannot be overstated – it got better the longer I thought about it afterward. My initial reaction was one of disbelief and slight horror, but I think that was more as a result of not having experienced a film like this before. It does not shrink away from taboo areas – it took me a good while to fully realise what I was watching during the scene with Lydia and her brother. 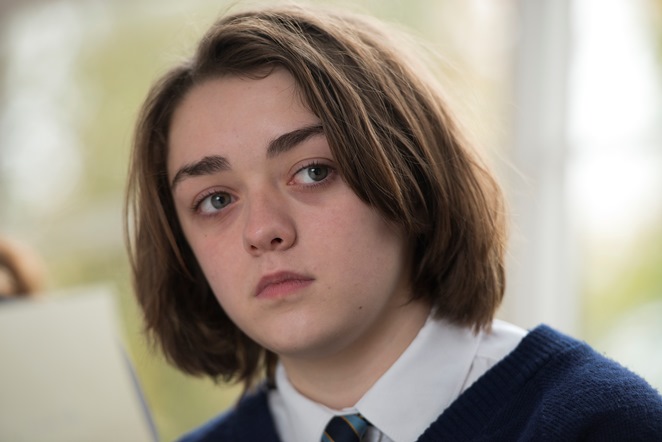 Unfortunately, films like this one are often labelled “revolutionary” or “unique” only because they don’t feature men or prioritise men’s viewpoints. However, the fact that The Falling is female-centric should not have to be cause in itself for celebration. It is noteworthy because it has a truly one-of-a-kind story, played to perfection by an accomplished cast. My hope is that Morley’s work will trigger a wave of female driven, well-rounded and challenging films: the British cinematic world is in dire need of them.

First photo is of two young women, Maisie Williams as Lydia and Florence Pugh as Abbie. Lydia, with short dark hair, is lying on her back on a checked colourful blanket spread on the grass, holding a brown-and-yellow-and-golden umbrella. Abbie, with long blonde hair, is lying on her lap. Both are wearing navy school uniforms and are dreamily staring at a point beyond the camera.

Second photo is of Maxine Peake as Eileen, Lydia’s mother. She is in the kitchen, wearing a floral-patterned robe. She has an impeccable ginger beehive on her head, she’s wearing heavy blue eyeshadow and is smoking a cigarette.

Third photo is of Lydia/Maisie Williams. It’s a close-up of a girl with short dark hair and big blue eyes, looking somewhat distracted/enigmatic.

Sophie is Northern Irish, living in Wexford and studying in Dublin. She has a husband, a cat and a weakness for Sandra Bullock. Tweets about films, books and feminism @Sophocles90