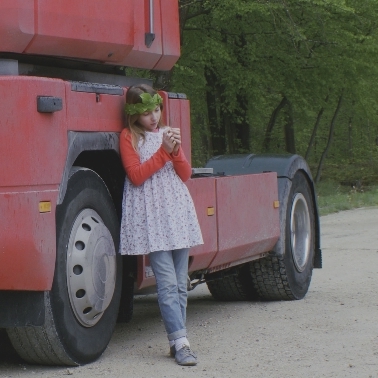 My name is hmmm

This film is hmmm…

My first thought upon watching My name is Hmmm… (Je m’appelle Hmmm… in French), the directorial debut by the French fashion designer agnès b. (Agnès Troublé), is just that : hmmm… I’m not sure what to make of it. I can see great potential in parts of the film, especially early on. I am engaged and intrigued, I want to know what further twists are going to occur in this already tragic family dynamic, what will become of these characters?

I am instantly struck by what looks like a rather unusual arrangement between Céline (Lou-Lélia Demerliac) and her father Dany (Jacques Bonnaffé). The dreary setting combined with exchanges such as: “Shall we go upstairs?” (Dany) and “Let me plate up first” (Céline), strike an ominous chord that sadly plays out in an oblique but nonetheless disturbing scene of sexual abuse of Céline by her father. This behaviour is juxtaposed with his asking in the previous scene why she hadn’t gone to school that day. Suddenly the precociousness of Céline’s attentiveness towards her siblings, who are only a few years younger than herself, is revealed as a frightening faux-family: a beer-swilling, out of work father, an exhausted, grey-faced mother figure and two small children who are apparently blissfully unaware of ‘adult’ troubles. 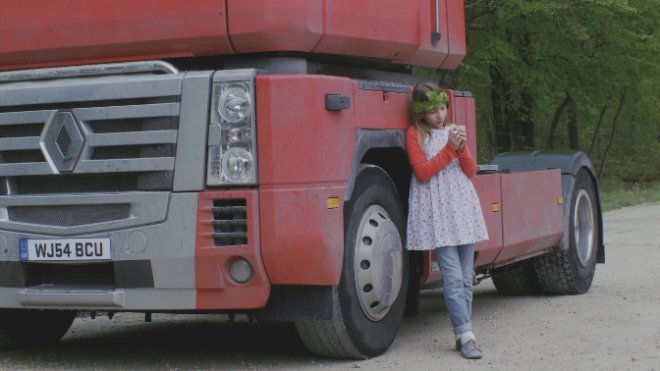 Incidentally, the father is later shown crying over his abuse of Céline, apparently quite overcome by his anguish. I’m not really sure what the point of this scene is. Are we, the audience, meant to sympathise or credit him with some humanity because he at least realises that his behaviour is wrong, even though he attempts to perpetuate the abuse later in the film? Personally, sympathy is beyond me. My views aside, the idea is quite timely, with programmes such as Channel 4’s The Paedophile Next Door, which explores “radical and controversial alternatives” to how the state deals with paedophiles. However, I digress. Céline’s mother, Estelle (Sylvie Testud) completes this depressing family portrait. She’s working in a low paid job that she clearly doesn’t enjoy, and the highlight of that particular working day is the sight of a dark, handsome stranger whom she asks for a cigarette. So far, so bleak.

Céline displays some of the classic characteristics of an abused child as outlined by the NSPCC: she’s secretive, has poor school attendance, is reluctant to return home after visiting extended family and, most particularly, she shows a clear desire to run away: she etches the mantra “One day I’ll leave” onto her arm in pen and tells her doll: “We’ll leave. I want to die.” The characterisation of this little girl is bang on; she’s believable and I empathise with her.

This is where my problem with the film lies: the many unlikely, unexplainable and genuinely bizarre moments, in terms of cinematic style, script and action

Eventually, Céline gets her chance: on a school trip with her class, from whom she’s clearly isolated, after playing on her own for a while she explores the area around the beach and comes across a freight truck, in which she hides. The viewer has already glimpsed the driver of said truck (Douglas Gordon as Peter), who is himself obviously emotionally distraught, in the opening scenes of the film. Inevitably, he returns to his cab, starts the engine and inadvertently takes Céline with him. Thus begins their adventure. 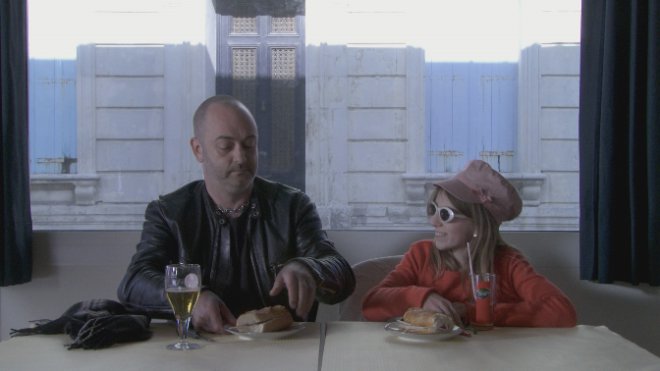 While some reviewers have expressed incredulity at the idea that Céline would want to “run away” with Peter, it is clear to me she hadn’t met or seen the driver prior to getting in the truck. I found moments in their relationship quite touching, as they ultimately develop a bond based on their respective emotional pain. However, Peter’s remarkable calmness upon seeing Céline for the first time in his rear-view mirror, I found unbelievable. Not to mention the fact that he doesn’t immediately seek to return her to her caregivers; something you’d imagine a suitably responsible adult would do.

This is where my problem with the film lies: the many unlikely, unexplainable and genuinely bizarre moments, in terms of cinematic style, script and action. Peter is characterised as a responsible adult in the rest of the film, so why the lack of appropriate concern in this instance? In another scene Céline’s father enters a bar and for no apparent reason this one scene is shot in black and white. But wait, Dany’s about to explain the reason for this to the bartender – “I’m seeing everything in black today.” I actually groaned.

I was on board with the protagonist throughout, due to a stellar performance by Lou-Lélia Demerliac

And that’s not all. Besides the regular change in camera styles, there are the numerous creepy moments including a chap at the municipal baths who gives Peter and Céline a thumbs up in the changing rooms, the occasional bit of text that appears on the screen such as “You are crying?”, the people who’ve painted themselves white and are silently dancing in the woods… I could go on. It’s all just a bit odd.

Obviously, this is an art house film that is expected to deviate in style from the mainstream. But it seems to me that the narrative structure of the film has been loosened to the point that as a whole it’s rather incongruous. It seems like a cinematic translation of a badly written modernist novella, or a dull acid trip. I think that there was potential for a really insightful and moving film here. I agree with Ken Loach who said that “this is a film full of ideas, with original ways of looking at things” and Gasper Noé’s opinion it was “sincere, touching and even optimistic”, but I am left unconvinced both by the ending as it relates to Céline’s father and by the unity of the film itself.

I was on board with the protagonist throughout, due to a stellar performance by Lou-Lélia Demerliac. Douglas Gordon as Peter also delivered a subtle and genuine portrayal of his character. But it just never quite came together. The exploration of the psyche of an abused child and their abilities to develop different relationships is ripe for exploration, but I think this film was let down by poor writing and direction. My name is Hmmm… comes across as a product of a prolific imagination that lacks the filter for refining ideas. Done differently, the film could have offered a more cohesive analysis of a compelling story.

Both pictures courtesy of Soda Pictures.
First photo is of a young girl (Lou-Lélia Demerliac as Céline), wearing a white dotted dress over jeans and a green leaf wreath on her head. She’s standing next to a red body of a lorry.
Second photo is of a man (Douglas Gordon as Peter) and a young girl (Lou-Lélia Demerliac as Céline) sitting at a table in what seems a restaurant or a cafe, with a sunlit street in the background. The man is wearing a black leather jacket and is not shaven, he’s picking up a baguette from a plate in front of him. The girl is wearing red jacket, pink hat and sunglasses and is looking at the man laughing. There’s a half-full glass of beer in front of him and a soft drink with a straw in front of her, next to a baguette plate. There is a scarf on the table next to the man.