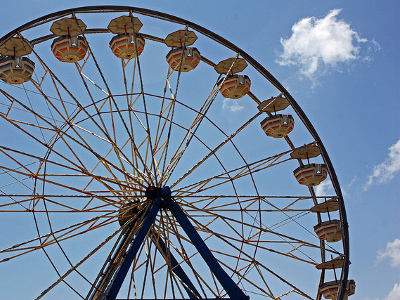 For those of you who haven’t committed the structure and processes of the site to memory, for the last couple of years we have instigated a rotating editor system – rather than having one person as constant editor of the site, we rotate among the team, so a new person comes into the position every six to twelve months. It’s been a little over a year since Helen handed over the editorship of The F-Word to me. Now it’s my turn to hand over to the next rotating editor: Ania!

While Ania will continue to edit the film section of The F-Word, she’ll now also be overseeing the running of the site. She’s fantastic and I’m really pleased to pass the role onto her.

As for me, I’ll continue to edit the theatre and arts sections, as I have done since 2012, and will hopefully have a bit more time to blog myself!

Please join me in welcoming Ania as rotating editor and wishing her all the best.

The image shows a ferris wheel against a blue sky with a white fluffy cloud in it. Because we’re rotating and it’s symbolic. Photo by Karen Kleis and used under a creative commons licence.