An anonymous painting of demigoddess and queen of the Amazons, Penthesilea. 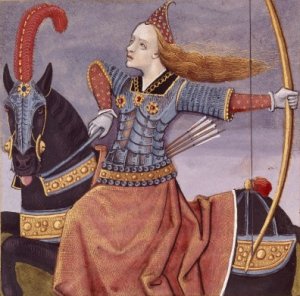 An article on Buzzfeed caused much comment in my Twitter feed on Tuesday. In This Obscure Tumblr Sexuality Saved My Life, writer Bitty Navarro describes the frustrations and miseries of her early love life in a world far more interested in sex than she was. Through identifying as demisexual, Navarro describes being empowered see her sexuality as entirely legitimate and gained a language with which to breach the subject with prospective lovers. This is all fantastic.

But then instead of concluding that there is a problem with these (patriarchal) expectations, she identifies it as an individual sexuality.

It’s obviously wrong to dismiss how someone chooses to frame their own sexuality. However, Ditum does raise an issue which also bothered me in Navarro’s piece. There’s a risk that, in attempting to untangle our own sexual identities, we end up promoting the very same mythical idea of normal sexuality, including our culture’s oppressive expectations, which leads many people to feel uncomfortable about their sexuality.

The use of the word soccer suggests Bitty Navarro is not British, and I can only really comment on British culture. However, if a Martian landed in the UK in 2015, they may well believe that there was such a thing as normal female sexuality. Psychologist and sex therapist Meg John Barker writes that “Am I normal?” is the most common question she is asked.

Most religions discourage sex outside monogamous relationships with a deep and meaningful connection and our government privileges such relationships. Women routinely underplay the number of sexual partners they have and very many women insist that their sexuality is not based on physical attraction. I once had a conversation with a friend who claimed that her boyfriend had, to borrow John Servante’s phrase, hit the ugliness jackpot.

“But surely he’s good-looking to you?” I asked.

“Not particularly,” she boasted, “but then I’m not shallow like that.”

So there’s that kind of normal. But of course, heterosexual female lust is hardly taboo. Social media accounts exchange photos of sexy male actors, singers and sportsmen. Outside on a Saturday night, there are hen parties, with male strippers and penis paraphernalia. And inside, there’s Strictly Come Dancing with its unrelenting – if good-humoured – comments on how gorgeous and sexy the male dancers are. Aidan Turner’s bare-chested scything scene in Poldark proved so popular that they injected another bare-chested scything scene into the BBC adaptation of The Go Between just a few months later.

Clearly, there are many spectra of sexuality (or perhaps something more like a three dimensional blob, within which some people stay put while others move about), but there is no normal. It’s no more or less normal to keep phone contacts for early morning booty calls (an example Navarro gives) than to abstain from sex altogether. It’s all okay though.

Navarro describes having boyfriends she didn’t find attractive and feeling socially obliged to have sex, which is horrible, but tragically commonplace. Our culture still frames sex as something that women are obliged to give to men for various reasons – because he saved the day, because he bought desert and of course, because he is her date, boyfriend or husband. Such sex varies between the tedious and the traumatic, whoever you are – having a high libido doesn’t mean wanting whatever sex is on offer at any time. And this sense of obligation is, as Sarah Ditum points out, extremely dangerous.

None of this casts any doubt over Navarro’s description of her own sexuality and the very positive story of her finding a language to describe it – it has, she says, saved her life. However, so much of the experience she describes is about other people and the way our culture treats women’s sexuality, regardless of what that sexuality is. It’s important that in exploring our individual differences, we don’t normalise the same cultural ideas which leave many of us out in the cold.

[The image is an anonymous medieval painting of Penthesilea, Queen of the Amazons, who seemed relevant because she was a demigoddess. A red-haired white woman in elaborate armour rides on horseback, wielding a bow. This image can be found on Wikimedia and in the public domain.]