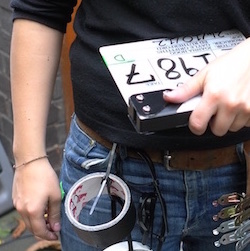 Calling the shots, calling out gender bias in film industry

The Cannes film festival (of which 69th edition opens tomorrow) has a poor record when it comes to gender (and any other, really) parity: four years ago, I blogged about the open letter written by French feminist activist group La Barbe, protesting against the fact that back in 2012 not a single film by woman director was entered into competition. Last year, the festival made headlines by turning away some women invited for the prestigious red carpet screenings for not wearing high heels. This year, three out of 21 directors who have films playing in competition are women: a meagre 14%. As cinephiles and film industry professionals are packing their suitcases to leave for Cannes, feminist (and other) researchers are busy rounding up the most recent numbers depicting the not-that-glamorous reality of women working in film industry, both in the UK and Europe.

Tonight at London’s BFI Southbank, the team of Calling the Shots, research project sponsored by the Arts and Humanities Research Council and based at the University of Southampton, will discuss their freshly released report which reveals a serious diversity problem at the heart of the UK film industry. With Dr Shelley Cobb as principal investigator, the team includes Prof. Linda Ruth Williams and Dr Natalie Wreyford who worked hard counting all the women working in key production roles on British films in 2015. The full report can be viewed on their website but the executive summary is, predictably, pretty disappointing:

In 2015, women constituted just 20% of all directors, writers, producers, exec-producers, cinematographers and editors on 203 UK films in production during 2015. Of those women, only 7% were of Black, Asian, or Ethnic Minority identity, making BAME women less than 1.5% of all personnel working in these 6 key roles last year.

Calling the Shots report comes hot on the heels of two other crucial studies released recently which, alongside initiatives such as Raising Films, contribute to momentum in what should be seen as the major calling out of film industry’s diversity (and not only gender) bias. On 4 May, Directors UK (the professional association for British screen directors) launched the report ‘Cut Out Of The Picture – A study into Gender Inequality Amongst Directors within the UK Film Industry’, prepared by Stephen Follows and Alexis Kreager (with Eleanor Gomes), which studied 2,591 UK films released between 2005 and 2014 and found that just 13.6% of working film directors in the last decade were women. Even more worryingly, the percentage of films directed exclusively by women only increased from 11.3% in 2004 to 11.9% in 2014: a pertinent piece of research to quote back at all those who say, rather patronisingly: “But things must be getting better for women filmmakers, no?” Well, no.

Earlier in April, the European Women’s Audiovisual Network (EWA) shared their report ‘Where are the women directors? Report on gender equality for directors in the European film industry (2006-2013)’, a result of three years of research in conjunction with six national film funds and four universities from across Austria, Croatia, France, Germany, Italy, Sweden and the UK, written and led by Ms Holly Aylett and co-ordinated by Francine Raveney. EWA found that only one in five films in the seven European countries studied is directed by a woman (21%), and the authors make their message clear: “This means four out five films are NOT directed by a woman.” Even more outrageous is the fact that 84% of the funding resources go into films that are not directed by women, which opens up a conversation about quotas, the issue often seen as controversial (try and guess who opposes it most). However, almost 70% of EWA respondents supported using quotas to achieve equality targets (with support ranging from 58% in France to 83% in the UK).

There is one country in Europe that implemented 50-50 distribution of public film funding between men and women directors. Anna Serner, CEO of the Swedish Film Institute, confirmed that in 2014 Sweden had 50% women directors, 55% scriptwriters and 65% producers. Refuting yet another hackneyed argument that quotas necessarily compromise quality, women creatives take home 69% (no parity here, sorry guys!) of the trophies at film awards ceremonies in Sweden.

In their recommendations, Directors UK not only call for “an industry wide campaign to ensure gender equality” but also set the target for 50% of films backed by UK-based public funding bodies to be directed by women by 2020. I cannot wait for this to happen; in the meantime, I feel very privileged to be part of Calling the Shots project as a PhD candidate. I’ll keep researching women filmmakers, in my case women documentarians, as I strongly believe it is crucial to document their amazing work to ensure they are properly seen now and never forgotten.