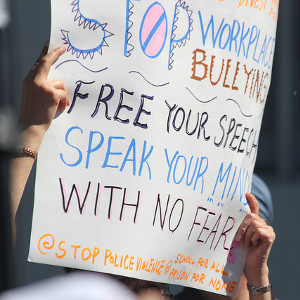 Workplace bullying is a feminist issue I’ve been thinking a lot about bullying over the last five years. I’ve found myself in two jobs where bullying has been an issue within this period of time, so unfortunately I’ve had plenty of incentive to meditate on it. It’s worth it for everybody to think about what bullying is and what it looks like in the workplace so they have the awareness to know how to spot it and prevent it.

Bullying tends to be commonly discussed with regards to children but research shows that bullying among adults in workplace environments in the UK is actually quite high: nearly a third of people have been bullied at work at some point. Women are more likely to be victims than men regardless of the gender of the bully, which makes bullying in the workplace a feminist concern. In most cases the bully will be a manager, but a co-worker can also be a perpetrator. My own personal experience includes both a bullying manager in one role and a bullying colleague in another.

In my first experience of bullying at work the manager fit the description of the stereotypical bully people tend to think of; he made unreasonable demands, was authoritarian, aggressive, overly critical, verbally abusive, threatening and had obvious problems managing anger. As a large man he was also physically intimidating. He was an overt bully who targeted many individuals, although some worse than others. As long as people didn’t question him about anything and were always compliant, it was possible to stay in good favour with him. There were many who complained within the team about his managerial methods and we all witnessed his outbursts. As far as I know no formal complaints were made about him, however, and he was promoted within the company while I worked there. Some of my male co-workers obviously admired him. This is the real problem with bullying at work. In many organizations it is allowed to not just survive but to flourish. It is the victims of bullying who are most likely to face harm to their lives and careers. I ended up leaving this job but not before having to take time off work due to stress and having to start taking anti-depressants to help me to cope.

In my second experience of bullying at work it was much harder for me to realise I was actually being bullied. My work colleague seemed on the surface to be the least likely person to ever bully anybody. She was, to all appearances, friendly, chatty and quite gentle in her demeanour. She was also quite a lot younger than me and physically significantly smaller which made it more difficult for me to think of her as a bully. Her tactics were covert and included things like not giving me information I needed to do my job, not supporting me on certain tasks when she was supposed to, criticising me behind my back and attempting to use others to isolate me. Due to its hidden nature covert bullying is not easy to prove and is likely to leave a victim feeling confused and paranoid. Again when this happened to me I had to leave my job because I had no concrete evidence of what was happening. I just knew that I was too miserable to stay where I was and that something was really wrong. It was only after I had put in my notice in that I had a colleague confirm all of my suspicions and admit to me that she was a witness to my bullying. I never asked her to speak up for me though because I knew if I did, she would probably become the next target of the bully herself. Covert bullying is more likely to be perpetrated by women and is also commonly described as “relational aggression”. This is not to say women never use overt bullying methods; in some cases they do.

Bullying is able to thrive in workplaces because they often adopt anti-feminist principles such as a focus on competition, individuality over community, status and materialism. In addition, some people are not sure what qualifies as bullying.

Bullying can be connected to ‘difference’, which leaves those from minority groups particularly at risk. For women, it can frequently focus on issues related to physical appearance and popularity.

As feminists I feel we all have a responsibility to educate ourselves on bullying and support victims, regardless of gender, when we witness it. We also have a responsibility to check (being completely honest) if we are using any bullying behaviours at work ourselves. If we are, then we need to make serious efforts to learn how to empathise with others and change our ways.

The photo is by Quinn Dombrowski and is used under a creative commons licence. It shows a banner being held up, which reads “STOP WORKPLACE BULLYING / FREE YOUR SPEECH / SPEAK YOUR MIND / WITH NOT FEAR / STOP POLICE VIOLENCE / SCHOOL FOR ALL / PRISON FOR NONE”.