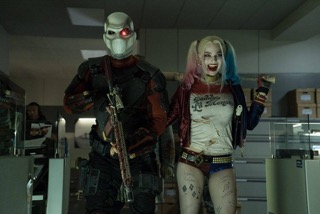 There could be a current temptation either side of the Atlantic to claim a honeymoon period for feminism: the UK has a second female prime minister, the US finally has a woman on the presidential home straight. Sexism is floundering like David Cameron’s honours list. Right? Well, fortunately, before we redefine Donald Trump as a master of satire and start dismissing research about how over half of British women have been sexually harassed at work, the good folks at the DC Extended Universe have released a film to remind us all of the prejudice that still rages.

Let’s be frank, Suicide Squad, the latest offering by the franchise, is a terrible film all round. The plot is overly perforated and fantastical, even for a comic book blockbuster, there are far too many characters for all but one or two to be developed in any meaningful way, and Jared Leto’s portrayal of The Joker, whilst by no means awful, feels far too soon after Heath Ledger’s still vastly superior effort.

Topping all of this however is the film’s biggest sin: it is laced with sexism to the point where its storyline would be even more preposterous without it. Oh, unless of course the premise was kept exactly the same but the genders of some characters were swapped… But obviously they weren’t, and therefore a quick run through the three main(ish) figures on either side of the debate exposes some staggering, harmful differences. First up, the women.

I’d be lying if I said I wouldn’t like to take Margot Robbie out for a cappuccino, but here she is so overtly sexualised that it becomes crude and uncomfortable

The film’s main antagonist, the Enchantress, is a revengeful sorceress who wages war on the human race after possessing the body of the unsuspecting archaeologist Dr. June Moore (both characters are played by Cara Delevingne). Clearly, the Enchantress’ substantial personality flaws don’t do a lot for feminism, but then admittedly she is a mystical demon rather than an earthly human woman. It’s the portrayal of June that is far more damning. Despite having the intelligence and ability to become an archaeologist, at no point does she display any strength towards resisting the Enchantress herself. Instead, the writers decided to go with the age old story of a man, in this case army officer Rick Flag (Joel Kinnaman), who saves June by falling in love with her and defeating the Enchantress on her behalf. The film’s problem is definitely not that there aren’t enough women, even the government official who conducts the Suicide Squad is female. Amanda Waller, played by Viola Davis, unites a group of imprisoned bad guys with supernatural powers in order to tackle the threat posed by the Enchantress. In theory this should be a positive role, an opportunity for a female Jim Gordon. Waller however is overwhelmingly brutal and manipulative, displays no compassion for anyone and in a mid-credits scene goes as far as to essentially sell out the squad, who by this point I think you’re supposed to like, to Batman. Davis herself describes Waller as “relentless in her villainy” and her character confounds the fear that for women to be successful professionally they must demonstrate absolutely no sign of weakness. Thinking that her character is “good for feminism” would be like thinking that Margaret Thatcher’s premiership was.

Then we come to the crème-de-la-crème: Harley Quinn played by Margot Robbie, whose performance makes her the film’s star. Whilst Waller and Moore are constructed as two somewhat opposite forms of sexism, Quinn is an embodiment of both. Like Waller, she does possess power and influence over some of the film’s male characters, but in her case this is based almost entirely on her sex appeal and lack of clothing. Sure, I’d be lying if I said I wouldn’t like to take Margot Robbie out for a cappuccino, but here she is so overtly sexualised that it becomes crude and uncomfortable.

Whilst Quinn is portrayed as erratic, amatory and dependent, Smith’s character becomes increasingly principled, human and honourable as the film progresses

As if this wasn’t enough, like Moore she is also portrayed as a woman dependent on male assistance. She too has a respectable career, in her case as a psychiatrist, but whilst treating The Joker she inevitably falls in love with him (because you know, what woman wouldn’t fall in love with one of her patients?). After allowing her new lover to turn her into a fellow villain, her whole existence comes to be defined by him and, just like Moore, she is saved by him at the end. Similarly, when at one point Will Smith’s Deadshot character betrays orders from Waller to kill Quinn, his decision seems based on his impression that she is someone in need of a bit of looking after rather than on a mutually respectful friendship between the two. Admittedly, before her return to prison Quinn does play a vital role in the Enchantress’ demise, but how relevant is that from a feminist perspective given the woman she has had to become in order to achieve this?

These wholly negative depictions of women would be bad enough on their own, but when compared to the film’s male characters they become even more appalling. This is arguably seen most clearly through comparisons between Quinn and Deadshot, the Suicide Squad’s two leading members. Whilst Quinn is portrayed as erratic, amatory and dependent, Smith’s character becomes increasingly principled, human and honourable as the film progresses. Deadshot is the main exception to the aforementioned lack of character development and, despite his past as a hired hitman, you increasingly find yourself rooting for him due to his love for his young daughter. It is in fact she who is the most positive female character in the film, although her appeal and emotive value seem to be based more on her age than her gender. Naturally, Deadshot also becomes the squad’s unofficial leader, a role that could just as easily have been given to Quinn if the writers were of a more progressive mindset. Similar redemptive treatment is also afforded to two of the film’s other male characters, Joel Kinnaman’s Rick Flag and Jay Hernandez’s El Diablo. Flag initially comes across as a dull, army-officer-by-numbers type but, despite his character being particularly poorly developed, his successful attempt to save the woman he loves sees him end the film with a positive role model status not afforded to any of his female counterparts.

Similarly, Diablo refuses to engage with the squad’s mission at first as he’s haunted by the misuse of his fire-summoning power that led to him murdering his wife and children. Eventually however he succumbs and plays a key role in the Enchantress’ demise. It seems that this is supposed to connect the audience with the character and lead them to forgiving him his considerable sins. Hell, in one key flashback it’s almost suggested that his wife was partly responsible for the tragedy, due to her angering of a man with such a dangerous way of expressing rage.

For action films to work there have to be good guys and bad guys, and not all of the good guys can finish the film as perfect role models. This is probably even truer of a storyline based on the good guys actually being bad in the first place. The problem, though, is that in Suicide Squad the differences between the female characters and the majority of the male ones are disgusting and inexcusable. Almost ubiquitously the male characters are inspiring and gifted redemption, whilst the women are either vastly exaggerated versions of what they need to be or regularly dependent upon men.

I am also aware that the film is based on comic books that were written at times when blatant sexism was more acceptable. Despite spending my teenage years trying to be Seth Cohen I must confess that I have not read those so I cannot comment on how closely the film follows them. I would however refute any attempt to use this as an excuse to defend prejudice; what difference would it have made to the plot to have Cara Delevingne and Joel Kinnaman swap their characters, or to have given Margot Robbie a pair of Will Smith’s trousers? We should not live in a world where narrative accuracy is more important than glaring sexism.

Nor should we live in a world where such films are still made, films that will be seen by impressionable teenage boys and girls who will enter cinema screens with shared expectations but leave having learnt very different lessons. The Western political realm might be pretending to overcome sexism, but Suicide Squad proves that the world still has some way to go.