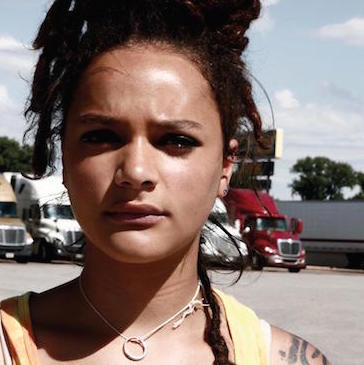 On the road with Star and her mag crew Andrea Arnold’s latest film American Honey spends 162 minutes travelling on the road with its main characters: a group of misfits, runaways and rebellious young Americans who drive across flyover states like Kansas and South Dakota, going door-to-door selling magazine subscriptions (a “mag crew”, as they’re known in real life). They’re loosely herded around by Krystal (played by Riley Keough) and they make little money, just enough to afford the alcohol and drugs they use to party in the bus and at the freeway motels they stay in. They sometimes steal when in the homes of potential customers, everything from jewellery to cars to dogs. Little background information is provided about the mag crew members, but it seems that the group members have little in common aside from their shared disavowal of the monotony of routine and their desire to escape their previous lives. The prolonged scenes inside the group’s minivan—their singing, fighting, drinking, smoking, banter and flirting—add up to create a road trip movie, all about the journey but refusing to think about a final destination.

At the heart of Arnold’s film is Star (played by non-professional actor, Sasha Lane, whom Arnold discovered on a Florida beach), whose backstory is left deliberately vague. Frustrated and traumatised by a life of looking after the two children in her care, living in poverty, and being abused by the man she lives with, Star is enticed to join the travelling group when she sees them partying their way through her local Walmart. Star is certainly a victim of economic circumstances and a survivor of sexual abuse but Arnold carefully steers the film away from a narrative of victimhood. Instead, in the time we spend on the road with Star and her new crew we receive a rich portrait of a complex young woman who wants her own piece of life.

In a 21st century world, in which lives are played out online through hashtags and status updates, Arnold’s emphasis on the physical and the non-verbal is important and refreshing

To some, her dreams might not seem like they amount to much: she admits to a truck driver that she’d like enough money to be able to buy a trailer of her own someday, and as she spends one fraught car journey gripping on to several hundred dollars, she declares that it’s the most money she’s ever seen. The film rejects more familiar narratives that focus on a tale of redemption or a quest to rise from rags to riches and haul oneself out of poverty and into the middle classes. Instead, Arnold plots another kind of freedom for Star, based on self-identity, sexual agency and a desire for the unknown.

The reclamation of her body and pleasure is at the heart of her journey. At the beginning of the film, Star is treated much like the whole chicken she finds during one afternoon of dumpster diving. In discomforting parallels, as one of her siblings stabs at the raw chicken with a fork until blood oozes out onto the kitchen floor, the camera tracks the children’s male guardian as he gropes Star’s body and tears fall down her cheeks, signalling to the audience she’s aware of what’s coming next. Then the scene ends. This is a telling and important decision on Arnold’s part. Rather than linger on the sexual abuse, American Honey uses later sex scenes between Star and the group’s top seller Jake (played by Shia LaBeouf, in one of his best performances to date) as a way for Star to reclaim and explore her sexual identity and pleasure. One such beautifully shot scene takes on a wistful, nostalgic feel as Jake drives a stolen car through a field of flowers in the hazy, late afternoon sun before he and Star have sex for the first time. In a 21st century world, in which lives are played out online through hashtags and status updates, Arnold’s emphasis on the physical and the non-verbal is important and refreshing. Star doesn’t talk that much throughout the film. Instead, the camera tracks her bodily responses to her environment; for instance, Arnold reveals Star’s new-found contentment through the image of the wind whipping back her dreadlocks as she sits atop the minivan with Jake.

Just like in Arnold’s 2009 Fish Tank, class and gender inflect each other in American Honey: wrapped up within Star’s coming-of-age journey is tale about the poverty epidemic that has swept across the forgotten states of the US. The timing of the film’s release date—around a month before the US elections—is particularly apt, given the narrative around the Clinton-Trump battle that, much like Brexit, has focused on urban liberal elites’ failure to understand working-class disenchantment with the country’s economic and political systems. The film provides glimpses into the tragedies of America’s socioeconomic disparities. The first house Star visits during her training with Jake, located in upper-middle class suburbia, is strewn with expensive gifts from a recent child’s birthday party. Later in the film, Star visits the house of children left to fend for themselves as their mother collapsed on the sofa after taking heroin. Time and again, the group stays in long-stay motels, where displaced families live when they can no longer afford to keep their home or trailer.

The joy of American Honey is to revel in Star’s growing awareness about her selfhood, to watch her take in the world and to witness her slowly unfurl

However, Arnold’s film refuses to simply stamp the label of victim across her characters. The group understands how class works in America and they game the system, performing different class identities depending on their environment. When they visit white suburbia, for example, Jake tells Star that he knows how to play potential customers, and we see him spinning a narrative about how he’s trying to fund his degree and better his life. Jake knows this is fodder for the middle classes who want to enjoy the smug feeling of helping disadvantaged youth but who know that they can close the door quickly after they have opened their wallet. American Honey runs the risk of romanticising life on the road as part of a mag crew. Reports surfaced last year about how members of some mag crews have been subject to horrific abuse and violence, and that sellers’ human and labour rights are often violated or ignored. Arnold’s film pushes these troubling issues into the background, and perhaps misses the opportunity to more fully explore exploitative and dangerous practices that lurk under the mainstream radar.

However, life in a mag crew is not thoroughly romanticised. The film avoids it through the development of Star’s problematic relationship with Jake. If Star originally enters the mag crew world escaping from the sexual abuse and violence she experiences at home, gradually the viewer is confronted with the fact that Star and Jake’s relationship adds to the pattern of exploitation that Star has endured throughout her life. The film ends with Star’s realisation that Jake might not be quite what he seems, and that their relationship might not offer her the safety she was looking for. Early sex scenes between the two characters have more of a liberatory feel but later, as we witness Star’s growing understanding of Jake’s erratic and violent behaviour, we are made aware of the continuing systemic sexual abuse that Star encounters in the different environments she inhabits throughout the film. American Honey is a film that feels at once expansive and claustrophobic. Its repeated (and I mean “repeated”—this film is long!) use of classic road trip movie tropes like endless shots of the freeway and the camera’s lingering gaze on the group staring languorously out of the minivan’s windows exploit the sense of freedom that we’ve all come to associate with America’s roads. Meanwhile, the cramped minivan scenes might seem suffocating to some viewers, and Arnold’s deliberate lack of narrative arc might feel exasperating to those who demand a clear sense of plot progression and a definitive ending. But Arnold’s refusal to develop Star’s character through the use of more conventional narrative and cinematic techniques is, in many ways, the point of the film. The meandering story is a homage to Star’s desire to escape the deeply oppressive world of abuse and neglect into which she was born, to break out from the socioeconomic power structures of a world that kept her chained so tightly to poverty and sexual violence. The joy of American Honey is to revel in Star’s growing awareness about her selfhood, to watch her take in the world and to witness her slowly unfurl and begin to take shape.

American Honey is on general release.

Image description:
1. A group of young(ish) people hanging out on the curb in the suburbia, with a large lawn behind them. Most of them are sitting on the curb, eating, drinking and smoking, with one woman standing and one squatting with her back to the camera.
2. A young brown-skinned woman, with dreadlocks piled up on her head and wearing a yellow tanktop, is looking into the camera. It’s Sasha Lane (of mixed black and white descent) as Star.
3. Two people are sitting in the convertible, looking off the camera to the left. There’s a white woman in the front seat, with long reddish hair, red lipstick and a large earring, holding a coffee cup (it’s Riley Keough as Krystal), and a white man with curly hair and some tattoos behind her, in the driver’s seat (Shia LaBeouf as Jake).
4. A young white man, bare chested and with prominent chest tattoos, is smoking in the front seat of the car, facing backwards. A wisp of white smoke is getting out of his mouth, parallel to his blonde hair swept to the side. There’s something that looks like a mouthpiece of a vapouriser against his chest.