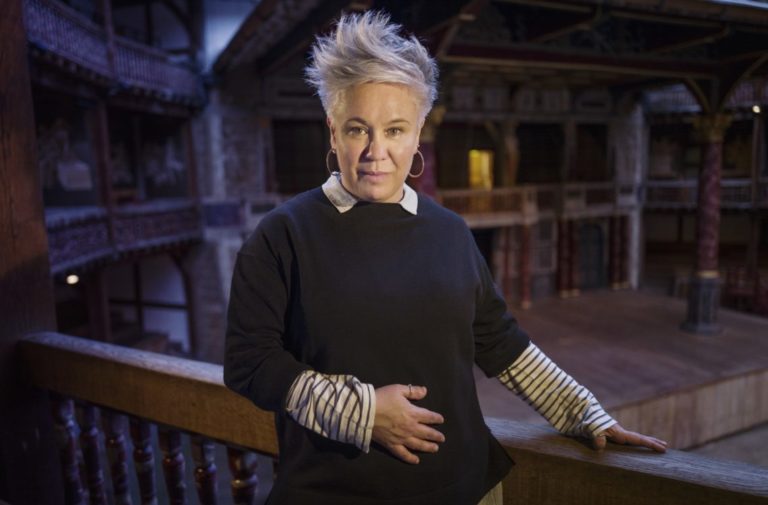 Emma Rice, the new Artistic Director of the Globe Theatre. She takes up her new position on April 23rd 2015 straight after her predesessor Dominic Dromgoole steps down. NO EMBARGO

One of the main pieces of theatrical news over the last month has been Emma Rice stepping down as Artistic Director of Shakespeare’s Globe. There’s clearly a lot going on here, and I think we almost certainly don’t know the whole story, but it’s hard not to think there’s been a touch of misogyny somewhere down the line. I didn’t love Rice’s A Midsummer Night’s Dream (the video at the link is unsubtitled) when I saw it, but I didn’t hate it either, and it was great to see a fairly diverse cast on stage; it felt like the Globe had come a long way from the huge number of all-male, all-white productions it routinely produced when it was first built. There’s a couple of good articles about the gendered criticism that’s been made of Rice here and here, both of them written before the announcement from the Globe’s Board.

Moving on to some of the performances and events that might be of interest to feminists in November and beyond: Written by poet and playwright Sabrina Mahfouz and inspired by a survey of over 1000 teenage girls, Layla’s Room explores the disturbing prevalence of sexual harassment in our schools. Aimed at teenagers aged 14+ and currently touring schools and venues throughout the UK until later this month, Layla’s Room hopes to capture the authentic voice of what it’s like to navigate the boundaries of friendship, fear and feminism. It has public performances tonight at The Dukes in Lancaster, tomorrow 9 November in Leicester at Upstairs at the Western and in London at Stratford Circus on 22 and 23 November.

On the 11 and 12 November at the Blue Elephant Theatre in London Gracefool Collective will be performing This really is too much. This dance theatre work reveals the downright absurd realities of what it means to be a 3-dimensional, high definition, water-drinking, salad-eating, moisturising woman in modern society. The show will also be performed at Yorkshire Dance, Leeds on 26 May 2017.

Hampstead Theatre will be hosting the second year of the Women Centre Stage Festival, run by Sphinx Theatre, from 14 to 20 November. The festival begins with four workshops exploring how women can claim more space within the arts before culminating in a day of performances and debates on 20 November. Four leading playwrights, Rebecca Lenkiewicz, Howard Brenton, Charlene James and Vinay Patel, are each being given 24 hours to write a play responding to that day’s news stories about women. The programme also includes new work by established and emerging playwrights. On 22 November at the Salford Museum and Art Gallery there will be Cells – A Body Of Work from Proud and Loud Arts, a live art installation created by 10 artists with disabilities from across Salford and Manchester to inspire change and challenge everything normal. The installation has been created in response to a Manchester Evening News report in October 2015 which described a 140% rise in reported hate crime incidents against people with disabilities. Admission is free.

At the Pleasance Theatre in London, Louise Orwin will be presenting A Girl & A Gun on 24 and 25 November. Back in 2015 Mary Paterson for The F-Word reviewed the show, describing it as “a two-person show – with highly stereotyped roles named simply Him and Her – presented in a cinematic experience on stage. Multiple cameras feed three screens, which show different angles of the live event. These projections perform the alchemy of the lens, heightening the difference between the sweaty, fulsome bodies onstage and their cropped, glistening images on screen.”

Theatre-maker and poet Hannah Silva will be performing her one-woman show Schlock! at the Rosemary Branch Theatre in London until 26 November. In search of alternative models of sexuality, Schlock! brings to life the final years of radical feminist writer Kathy Acker, ‘the high priestess of punk’, in an enthralling and atmospheric whirl of words.

And finally Eliza Power’s modern reworking of Tereus, Procne and Philomena from Ovid’s Metamorphoses, Feathers is on at the Hen & Chickens Theatre until 27 November and has an all-female creative team. Sex, lies and black comedy permeate Feathers, blending mythological symbolism and contemporary dialogue to create a dark tale of two sisters bound together by a past neither can escape.

That’s all from me for this month. There may not be a blog post for December depending on how much is going on, so if not I’ll be writing another round up in early 2017, see you then!

Image 1 (feature image) is a photograph of Emma Rice when she was the new Artistic Director of the Globe Theatre. It is courtesy of Shakespeare’s Globe and was taken by Sarah Lee. Rice is standing in a gallery of the wooden Globe theatre and is looking straight at the camera.

Image 2 is a photograph of Janet Suzman in Solomon and Marion by Ruphin Coudyzer. A woman wearing a blue dressing gown and with a grey blanket wrapped around her shoulders sits at a table. A cigarette droops from her lips as she looks out and to the right. On the table in front of her are candles and a glass of water. Behind her we can see a fridge and kitchen shelves holding tins of beans, plates and a bottle of wine.

Image 3 is of Louise Orwin in A Girl & A Gun by Field and McGlynn. Orwin sits on some packing crates holding a pink plastic imitation machine gun. She wears a bright blue dress and a red beret. She is against a bright yellow background.