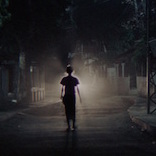 Fear does not need to be translated: Mattie Do in conversation

Mattie Do is a one-woman horror film industry. We meet the Lao filmmaker in the bar of a Central London hotel whilst she’s in town presenting her second feature, Dearest Sister, at the BFI London Film Festival. Mattie has a vibrant, enthusiastic presence, categorically unable to blend into the drab bar area that surrounds her. A self-described ‘cultural mutt’, Mattie was born in Los Angeles to immigrants from Laos, and worked as a make-up artist before moving to Laos to work as a consultant for the oldest film company in the country, Lao Art Media. Since then, she has single-handedly positioned Lao film culture on the international landscape with her two features. Chanthaly (2012) was the country’s first horror and the first film to screen at major international film festivals, and now she is touring the festival circuit with her sophomore feature Dearest Sister which premiered at Fantastic Fest earlier this year.

Q&A with Mattie Do Why horror? What attracted you to the genre?
I love horror. But I love a specific kind of horror, I’m not into splatter, gorefest type of stuff. I like ghost stories, I like being creeped out. I love The Others, Black Swan – it’s one of my favourite films – and also a lot of Guillermo del Toro’s films, like Devil’s Backbone and Pan’s Labyrinth. But I also specifically chose horror because I thought it would be fun and I also don’t think that drama always works for people, sometimes it doesn’t affect them. I didn’t want to do that. And comedy – I just don’t think I’m a very funny person, and comedy doesn’t translate overseas. What I find funny in Laos, even someone as close as Vietnam wouldn’t find funny. But fear, in every culture and country, does not need to be translated. Fear is palpable no matter what.

I have told a lot of young people what they can do to get their film seen internationally: embrace your uniqueness

How have Lao audiences reacted to the horror elements of the film?
Audiences loved the horror elements. I’ve made a point of not making bedsheet ghosts. They’re more like what I understood from my parents ‘ghosts’ were when I was growing up: they would talk about ghosts as physical figures, tangible, present. I’ve been in a very privileged position when I can help to forge what “Lao cinema” means. Before we were trying to make cinema that was trying to imitate Korean or Japanese cinema. Screw the desaturated white skin and see-through ghosts, screw the grey and blue palette! Let’s do something in shockingly earthy colours, because that’s what Laos looks like!

Do you feel a sense of responsibility making the films that you do and being the first horror filmmaker, not only the first female horror filmmaker, from Laos?
I feel so much pressure. I feel like I’m being scrutinised all the time. And I’m the only woman making film in the entire country, right? There’s a lot of pressure for me to be authentic – and then again [as I wasn’t born in Laos], I’m a mutt. At [LaoArtMedia] we work really hard to preserve the Lao-ness of my films because the whole goal I have is to show people something that is honestly and truthfully Lao.

I have told a lot of young people what they can do to get their film seen internationally: embrace your uniqueness, show them what makes us Lao. This whole film is based on the fact that when my mother died, I got tired of my relatives and distant friends coming up to me saying: “Did your mother visit you, in your dreams, in a haunting? Did she give you numbers? Because I want to buy the lottery next week.”

Do you think that’s why you’re more attracted to the supernatural elements of horror, because Lao culture is so permeated with them?
Most definitely. With Lao people, it’s very natural that there would be spirits around, always. We have spirit houses in every home, every business, even the government buildings have spirit houses. We don’t just give offerings to the spirits of our relatives, but also spirits who are in the vicinity who might be dwelling close by, so they stay in the spirit houses and not disturb the living. And every full moon, we have a day that we call “vanh sin”, which is the day that the spirits come out to play.

As a woman, I feel from a lot of male colleagues that I don’t deserve to be noticed, and there’s a mentality that people only like me because I’m the only woman making films

That’s one of the things that really drew my attention, how all the characters seem to be perfectly cool with seeing the ghosts.
I’m not the most superstitious person on earth, but being in Lao it’s palpable how much people accept that. Lao people are afraid of ghosts, but they understand that they’re there. No Lao person blinks an eye at the way that ghosts appear in Dearest Sister.

How do you feel you’ve evolved as a filmmaker from your first film, Chanthaly, to Dearest Sister?
I got to use a real camera! With a DOP [director of photography, cinematographer–Ania]! The cameraman had no-one to help him, no AC [Assistant Camera-Ania], no focus puller, not even grips that were trained – my interns were running around trying to get this stuff, breaking things along the way. I loved working with him though, it was like having an umbilical cord. To the point where I would ask everyone to leave the room because I wanted to have that moment to discuss with Mart [Ratassepp], ‘cause I had a very, very clear vision of what I wanted. I guess I learnt to communicate my vision to the different departments. It was the first time I worked with a professional crew myself. As a woman making films, have you experienced any resistance in Laos?
My [co-]producers are so supportive. Whenever we’re at a party or an event, I sit at the head of the table with them. They treat me like an equal. When we wrapped on the film River (2015) [which Mattie was one of the producers on – Ania], they opened this aged bottle of scotch, handed it to this government official, which was very polite, and he handed it to me. And then we did shots! But my resistance actually comes from a lot of foreigners in Lao. A lot of them are aid workers or NGO workers, and behave like the guardians of culture. Some of them feel like they “didn’t select me”, so they’re very opposed to me. So when Institut Français took a chance on me and decided to submit my project to the Cannes Fabrique des Cinémas du Monde, it was a huge risk. When the script got accepted, there were people who blatantly said that I should give up my spot for a more deserving filmmaker. As a woman, I feel from a lot of male colleagues that I don’t deserve to be noticed, and there’s a mentality that people only like me because I’m the only woman making films.

Can you talk about how you approached your female characters and their dynamics?
The women in Lao films [onscreen – Ania], they don’t make any decisions at all. I didn’t set out to make a feminist film, I just thought there was a huge hole in how women were portrayed in Lao films: women who make decisions, not necessarily good ones, but women who act. I wanted to eliminate the idea that women are super submissive. Ana [Vilouna Phetmany] seems like that at first but really she’s quite strong, and by the end she stands on her own. Both the women in this film [Ana and Nok, played by Amphaiphun Phommapunya] learn to stand on their own, not always in a positive way, but they do.

I feel that with the feminist film movement, it gets misconstrued sometimes because it doesn’t mean that all men are evil and it also doesn’t mean that we have to be the “strong badass bitch”. One of the beauties of women being strong is that they have to go through so much suffering, so much turmoil. They make bad decisions, and they have to suffer the consequences of making bad decisions, and that’s what makes women strong. I wanted to show people how Lao women act. Lao people seem very reserved and timid, but we’re actually very fun, rowdy, raucous. And that’s what I wanted to portray the women like as well, as they really are: flawed, imperfect, mean, insecure. I wanted to show all these different aspects of women in Laos.

All images courtesy of Shudder.

1. A colour portrait of Mattie Do, the film’s director. She is a young Lao woman, wearing her black hair in a bun on top of her head, red lipstick and a short necklace, and a black top.
2. A small alley at night, with the only source of light being a neon lamp picking out a slender silhouette in the middle of the street.
3. A young Asian woman with long hair and a bandage over her eyes, under which there are two compresses placed directly on her eyes, in a light room.

This post was edited on 27 December 2016 to change the name of the festival where the film premiered as well as to correct the name of Vietnamese full moon day.