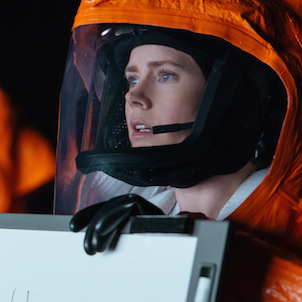 Denis Villeneuve’s Arrival is one of the best films of the year. A refreshing piece of science fiction when contrasted with all the recent space epics like The Martian and Interstellar, it’s both small in scale and a spectacle for the eyes and mind. This is a film about communication, family and the value of diverse educational backgrounds which just happens to feature aliens. The visuals are breathtaking but the effects are used strategically, and one would be remiss to not give a huge nod to the hauntingly beautiful soundtrack.

All these things are important when talking about Arrival but what I’m really interested in is Amy Adams in her best performance yet, adding to the panoply of powerful women in sci-fi who give us all a little hope for the future of the genre. But equally important is the contribution to the handful of films which depict a female professor on a complex personal and professional journey.

Banks faces the challenges of the otherworldly but also the more relatable obstacles of bureaucracy, gendered expectations and disciplinary divides

Arrival plays with the expectations of Amy Adam’s character, Louise Banks, a renowned linguist/university professor who is called in by the US government to try to communicate with aliens who have landed in Montana. The cultural perception of professors is very much aligned with images of old, white men and film is no exception, it is not too often we see female professors in films. When we first meet Banks, she is portrayed as a broken woman, trudging the university hallways without a care for the masses of students swarming around her. Through a series of flashbacks we learn of her daughter’s early death to a rare disease.

I sigh in exasperation knowing that the single, childless woman is all too many times the story of women in academia; this idea that you have to pour yourself into your career in order to make it work. Children are often perceived to be a hindrance to that. Of course, in this instance Banks didn’t choose not to have kids but the order of the events suggest that she becomes absorbed in her work because she is now childless. But I was later surprised to see that the theme of motherhood did not take over the entire film as it often does when a female lead is within a ten foot radius of a child (looking at you, Aliens and Terminator). Believe it or not, women are motivated by other things besides ‘motherly instinct’! To my even bigger surprise, Arrival had little to do with academic life either. Banks’ character encompasses so much more than just her job as a university professor. She is methodical, intelligent, bold and a tad rebellious, but she is also a human responding to the stress and expectations of her job. For all the miraculous scenes of language learning with the aliens, experimenting with teaching methods and revelatory breakthroughs in switching from auditory to text-based language, there are also scenes of distress and mental exhaustion. She faces the challenges of the otherworldly but also the more relatable obstacles of bureaucracy, gendered expectations and disciplinary divides.

Banks constantly asserts the need to treat the aliens as peaceful in the face of the defensive and at times aggressive stance the military personnel take. One memorable scene is when Banks, asked on the spot to think of examples of misinterpreted languages, appropriates the origin myth of the word “kangaroo”. This defuses the tension caused by the military’s assumption that the aliens use language the same way they do and allows Banks to continue to use her methods. Ian Donnelly (played by Jeremy Renner) is a physicist working with Banks to complement her strengths in communication with his analytical scientific specialisation. Donnelly represents the science community in general, seeking the distanced, mathematical approach as opposed to Banks who wants to work with her subjects directly and get their perspective. He is a great foil to Banks because their relationship encapsulates the contemporary battle between STEM fields and the humanities, where the former is frequently seen as more valuable than the latter.

At first Donnelly dominates the workspace and it’s clear that the other scientists and military personnel in the tent share his analytical approach. The scene in which Donnelly and Banks first walk through the tents is key to understanding the initial dynamic of the team. Banks isn’t even acknowledged or welcomed until she reaches her own small team. Many women who work in a professional environment dominated by men might know the exact feeling this scene evokes: the feeling of being sized up, tokenised and unwelcomed.

Arrival makes me feel optimistic for the future in a dark foreboding sort of way; maybe a visit from aliens is exactly what the world needs right now

However, Donnelly takes a back seat as the team sees the progress made from Banks’ techniques. This is a refreshing distribution of roles that you don’t see very often. By no means is Donnelly useless (he is the one who finds the key to deciphering the final message from the aliens) but it’s a nice break from the more common representation where the male lead “sciences” the shit out of everything. The focus is on Banks who takes the risks and asserts the need for interpersonal relations across nations, seeing the situation strategically rather than trying to find one key formula to solve the problem.

Arrival leaves its audience with much to think about, messages about time, language and communication which I cannot parse without seeing the film several more times. I have also understated its relevance to the current political climate: vigilante soldiers bomb the aliens’ ship showing how reactionary movements can rise up against perceived threats and there are some very Watchmen-esque doomsday themes.

Arrival makes me feel optimistic for the future in a dark foreboding sort of way; maybe a visit from aliens is exactly what the world needs right now. But it also makes me glad to see my profession of academia represented in a film that bears a resemblance to my lived experiences. I can only hope for more characters like Louise Banks in the future.

All pictures courtesy of Paramount Pictures, all rights reserved.

Image descriptions:
1. A person wearing an orange space suit with only their face visible (the face with delicate features and blue eyes) is holding a white flipchart with HUMAN written on it in black ink. It’s Amy Adams as Louise Banks in Arrival. There’s another figure wearing orange spacesuit in the background.
2. A white woman’s left profile against a sunlit yellowish-green field in the background, with a black oval shape floating above the ground to her left. Her hair is in a bun on top of her head and she seems deep in thoughts. It’s Amy Adams as Louise Banks in Arrival.
3. A white man in a grey jumper is looking intensely off camera, it’s Jeremy Renner as Ian Donnelly in Arrival. There’s another figure to the left, looking in the same direction via binoculars, and two soldiers (one white one black) in camouflage army uniforms and helmets in the background, blurred. There are white satellite dishes in the background too.