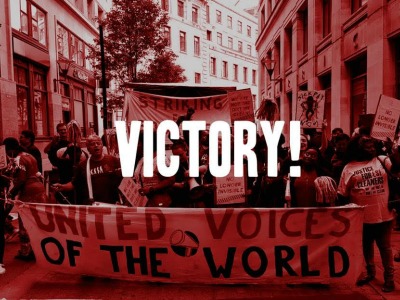 Supporting the LSE cleaner’s strike from the picket lines

The personal is political. Talking to other women about our experiences and making choices about how we engage in relationships and relate to our minds and bodies is incredibly important.

As feminists, we know what it means to be treated as if we are less than others. This means that we need to show solidarity to other people who are oppressed. We have a particular responsibility to other women who are engaged in struggles in areas where feminist arguments are especially urgent, like sex work, reproductive rights and low wages for work typically gendered female, like cleaning. This is why Feminist Fightback supported the recent strike action by cleaners at the London School of Economics (LSE).

More recent activity has focused on reproductive rights: actions to stop pro-life groups harassing women outside abortion clinics, disrupting the 2017 March for Life in Birmingham with direct action and campaigning against denial of NHS maternity care to those who can’t show a UK passport. Feminist Fightback supported the TFL cleaners’ strike with direct action in 2008. We still see fighting for work that is traditionally done by women to be properly valued as a feminist issue.

It was the sixth day of ongoing strike action by LSE cleaners. I left the house at 5:15 am for a 6 am arrival at the picket line, which is harder when it’s still dark outside. Cleaners start their shift at 6 am every day. Despite the time of day, the atmosphere on the picket line was great. Cleaners and union organisers from United Voices of the World union (UVW) rallied some inspiring speakers and there was frequent dancing to Shakira between 6-8:30 am. Some of the best slogans were “We are not the dirt we clean” and “London School of Exploitation”.

The London School of Economics includes specialist institutes for both inequalities and gender yet outsources cleaning to a private contractor. This allows cleaners to be employed on different (significantly worse) pay and conditions than other LSE staff when it comes to sick pay, annual leave, pensions and maternity/paternity leave.

The cleaners, who are all migrants and/or black and minority ethnic also had problems with the way they have been treated by their managers, including harsh discipline and a lack of respect. Cleaners voted to keep striking one day a week until LSE agreed to offer them the same basic conditions as other LSE employees. Mildred Simpson, one of the cleaners who has been at LSE for 16 years said: “We want equality — nothing more, nothing less.”

London university cleaners in smaller, more radical unions have won strikes over the past few years including at King’s College London, Senate House and Guildhall over pay and conditions and to receive the London living wage. The LSE cleaners fought not just for themselves but on behalf of their colleagues and other workers. They risked the loss of earnings, further victimisation by bosses and ultimately risked losing their jobs, but as one of the union organisers said, this was always a fight they had a good chance of winning.

On June 8th, we learned from the UVW that the LSE cleaners won their strike. From spring 2018, all cleaners at LSE will be brought in-house, meaning they will receive the London living wage and the same annual leave, sick pay and pension as others employed by the university.

This will not be the end of the fight for better working conditions for university cleaners and for women more broadly. UVW say this has set a precedent for outsourced workers at universities, and it looks likely that catering staff at SOAS will soon follow suit. Maybe we will see you on the next picket line?