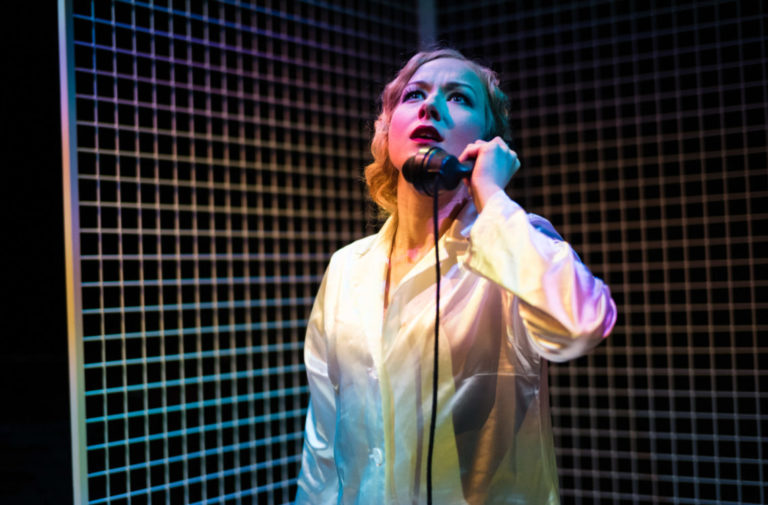 When staging works from the past, you often come across characters and situations that don’t suit the sensibilities of a modern audience – by which I mean, of course, they can be racist, sexist, homophobic, transphobic, disablist or in some other way troublingly offensive. From the antisemitism in The Merchant of Venice to the apologism for domestic violence in Carousel, playwrights and librettists have long been cheerily penning scenes that now cause controversy.

Directors normally choose one of two ways with these problematic pages. They either go the whole hog and stage it true to the script, imploring the audience to recognise that things were different back then (as if the prejudices no longer exist). Or they can somehow subvert the message through the staging and other directorial decisions, which can change how an audience understands a work. OperaUpClose have gone a third way with their staging of Poulenc’s opera La Voix Humaine at Kings Place in London. They identified a problem: the leading lady, who is the only character seen onstage in this solo work, is a fairly two-dimensional cliche. The director, Robin Norton-Hale, describes her as “a stereotypical hysterical woman trying to hold onto a man”. The company were concerned about what the opera was saying about gender roles. For that reason, Norton-Hale decided to address this issue by imagining the ex-lover is a woman. She explains: “Elle is both melodramatic and manipulative on occasion, but by thinking of her lover as a woman, those become individual personality traits rather than ‘female’ ones – likewise the things her ex says which are cold or dismissive are then not ‘male’”.

It’s an interesting idea and I’m all for more queering of works like this. The trouble is, this concept doesn’t translate at all to the stage. The programme gives us pages of information about the level of research done into the gay and lesbian scene in Paris in the 1920s and 1930s, explaining the reasons for this approach to make sense. If you fail to read the programme, however, there is not one hint that this is the way the company is dealing with the opera’s gender stereotyping.

In fact, the libretto indicates the ex-lover is a man. Everything Elle (performed by Sarah Minns) vocalises is on the phone, primarily with her ex, but also in snatches of conversation about him with others, and she uses male pronouns and refers to him as “Monsieur” throughout. Norton-Hale says that they chose not to change anything in the libretto, and justifies this by saying: “some gay women at the time did refer to themselves by male names and pronouns.” Nonetheless, this is unlikely to be something many audiences will be knowledgeable about, so it still feels pretty unhelpful.

I also fail to understand the squeamishness about changing the libretto, given the piece is performed in translation. Once you’re already substantially changing the sounds of the words being sung, does it really impact the integrity of the piece to swap a few “him”s to “her”s? Even so, there are other ways to hint at a relationship between women. Perhaps Elle could have a picture of her ex, either on display or that she brings out to look at while on the phone. But there is nothing like this.

Therefore, without the programme notes, the work is just as Norton-Hale had feared. Elle does indeed come across as a flat character built on stereotypes. To make matters worse, her uninteresting character is matched by an uninteresting plot. At first, the mundanity of the scene is mildly entertaining. Watching Elle get frustrated over a wrong number and issues with the phone line makes the situation somewhat relatable – not something many operatic scenes are known for, even if the emotions they convey are often universal. However, this wears quickly, exacerbated by the conversational tone, which musically translates into endless recitative – all speech, no drama.

The sole benefit of this musical style is that on the rare occasions where there is an exciting moment, it lands with more impact than if things had been dramatic throughout. When Minns starts hitting high notes as she relates how frantic she has been, it is significant. Similarly, when Elle accuses her ex of being out rather than at home as she can hear music, the piano (played by Richard Black) cleverly introduces a faint tune that gives us a sense of what she is hearing. Those moments are worth savouring, but they do not save the work.

It is worth highlighting that although I have issues with the piece, Minns and Black perform well. In particular, I appreciate how Minns brings realistic touches to her phone conversation, the occasional underplayed cough, giggle or sigh making it seem more natural. She commands the stage; a challenge in a solo show. Fortunately, the setting itself has been well thought-through, with several walls setting up an interesting shape for her to wander around. The walls themselves are made of metal grids, so she can be seen when she is behind them, and bare bulbs illuminate her in changing patterns throughout.

Perhaps ironically, if OperaUpClose had chosen the first path, and staged La Voix Humaine as Poulenc intended without any further comment, I would feel more kindly towards it. I doubt it would be my favourite opera, or even close, but the directorial decisions and performances tended to enhance the work. Sadly, by attempting to introduce an interpretation that exists only in the programme notes, they seem to be looking for the credit for thinking more progressively while lacking the boldness to follow through on their convictions.

La Voix Humaine is being performed again on 6 and 20 August at Kings Place.

The image is a photograph of Sarah Minns in OperaUpClose’s La Voix Humaine by Christopher Tribble. Minns stands in the middle of the stage between walls made of wire. She holds a telephone up to her ear, looks as if she is singing and wears silky white pyjamas. She is starkly lit and the stage seems bare even with the staging.