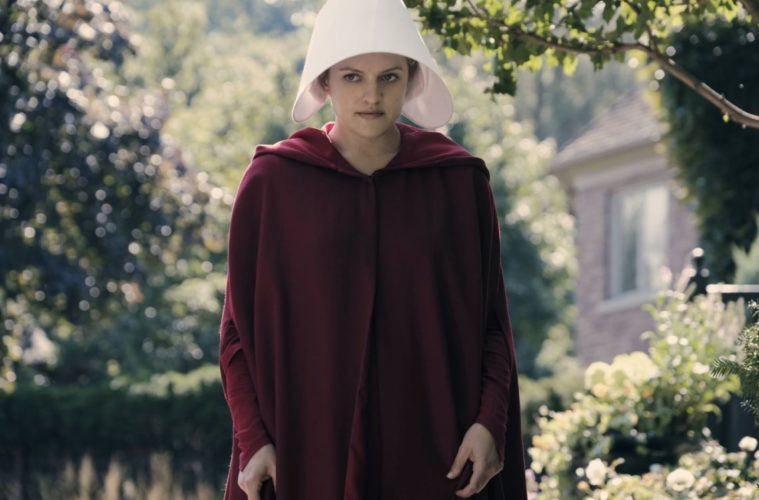 Despite some changes to her beloved novel, Becky Kukla thinks the serial adaptation of Margaret Atwood’s The Handmaid’s Tale is looking great If The Handmaid’s Tale had not been written over 30 years ago, the current Hulu adaption might feel rather heavy-handed in the way it tackles the future it is portraying. Released less than six months into the era of President Trump, it feels eerily relevant in a way that it may not have done even ten years ago. Predictions of right wing fundamentalists taking over the government, rollbacks on the rights of women and minorities and ‘temporarily’ halting the constitution all occur in the current version.

One could accuse showrunner Bruce Miller and director Reed Morano of taking advantage of the current climate, but Margaret Atwood wrote The Handmaid’s Tale in 1985. The novel won the first ever Arthur C. Clarke Award in 1987 and hasn’t stopped selling since. Frequently compared to Orwell’s 1984 and Huxley’s Brave New World, The Handmaid’s Tale deserves to sit high upon the shelf of terrifying dystopian future novels because of its distressing presentation of a society driven by misogyny. Although the current series’ production began way before Trump hoodwinked his way into the White House, The Handmaid’s Tale feels much more plausible than any other dystopian future.

The story, both in the novel and in Morano’s adaptation, follows Offred (played in the series by Elisabeth Moss) who is a handmaiden in the Republic of Gilead. Her job (if you can call it that, as she isn’t being paid) is to act as a womb for the offspring of high ranking commanders and their wives of the Republic. Due to a steady decline in fertility and pregnancy (blamed on contraceptives and chemical radiation amongst other things), women who cannot conceive are considered “un-women” and are discarded. This is with the exception of the Wives, the upper-class women married to the rulers of Gilead. Offred, having already given birth to a daughter before the Republic came to be, becomes a Handmaid. Even her name refers to her commander, Fred. She is “of-Fred”.

A significant difference between book and TV show is the reveal of Offred’s real name: June. Though implied in the novel, it is never used or confirmed to be her real name. In the series, June is referred to by her real name several times, which actually helps us to remember that she did have a different life before, a life much more similar to ours.

Gilead, geographically at least, is what used to be the New England area of the US. There are indications that the land outside of Gilead has been destroyed by radiation and nuclear waste and one of the punishments for un-women is to be sent to these places, commonly known as the Colonies.

Of course, the biggest fear when adapting such a critically acclaimed novel is the possibility of royally messing it up – see the 1990 film by Volker Schlondorff, or rather don’t. Considering the vast majority of The Handmaid’s Tale takes place inside Offred’s head, it is a story which is perhaps not the easiest to adapt for screen. Instead of ignoring this, Morano utilises extreme close-ups of Offred’s face which, combined with her voiceover, make us feel as if we are inside her head, experiencing everything that is happening. Morano uses shallow depth of field to blur Offred’s surroundings, especially when she is trapped alone in her bedroom in the present day. This produces a dreamlike effect, hazy and unclear, as if to imply that this could all be a terrible, terrible dream, in stark contrast to Offred’s flashbacks, which are almost always in sharp focus. These are the things Offred wants to remember, the things she knows to be true. The present, however, is a living nightmare – unfocused and confused. There is no clear vision. Although the series has a rather slow start, by episode 3 (‘Late’) it does begin to pick up. Offred’s flashbacks explain how the leaders of the Republic were able to financially ruin women due to gender being logged in banking records. I am reminded of our own society. A friend had pointed out to me recently the difference between our UK driving licenses: my male friend simply has his name written on his, mine has ‘Miss’ before my full name. Though it may only be a small thing, it’s a clear indication of the divides that still exist within our supposedly progressive society. Like with the banking records, men and women are neatly divided into two categories and this filing system doesn’t even begin take into account the fact that there are more than two genders.

This week, a different friend told me that he couldn’t stand watching The Handmaid’s Tale because it made him too angry. He couldn’t understand how Offred could let herself be forced into the situation she is in – why did she not fight back? He couldn’t identify with her as he didn’t believe he would ever be passive enough not to resist.

With no financial independence, a ban on having jobs and shooting anyone who fights back, women are forced to become dependent on their husbands, partners or fathers. Things had been gradually changing for the worse, but it wasn’t until this point that the damage seemed irreversible. But by then, it’s too late. Without financial power, the women of Gilead had nothing. No independence, no bargaining power, nothing to give their voices any gravitas. As Offred says in a direct quote from the novel: “Nothing changes instantaneously: in a gradually heating bathtub you’d be boiled to death before you knew it.” The protest scene articulates this horror and disbelief that the system has failed. They can’t do this, can they?

In the countries of the so-called “Global North” critics tend to talk about The Handmaid’s Tale as a cautionary piece of literature. Margaret Atwood herself says that the novel is based entirely on real life events throughout history. What we may have failed to grasp, at least in the past, is that there are women around the world living The Handmaid’s Tale, and worse. In Saudi Arabia, women are still not allowed to vote, drive cars or leave the country without male permission. There have been countless stories of women attempting to flee Saudi who are forcibly returned home thanks to the Male Guardianship Laws.

Just three years ago, 276 school girls in Nigeria were kidnapped by terrorist group Boko Haram, seemingly for attempting to go to school and get an education. Like many terrorist groups, Boko Haram do not believe that women should be educated. There are still 113 girls missing. Just five years ago Savita Halappanavar died from pregnancy complications after being refused an abortion due to Ireland’s restrictive laws: a sobering reminder than, also, in ‘the West’ women are often seen as wombs on legs. Ofglen, Offred’s confidante and member of the resistance, has her clitoris removed as punishment for being a “gender traitor” (the term for gay and lesbian people under Gilead’s regime): a truly disturbing sequence that has its equivalent in our world – an estimated 200 million women and girls living today are understood to have undergone FGM. The Handmaid’s Tale certainly feels like it is representing and speaking to the middle classes the majority of the time – June and Moira (Samira Wiley) are university educated and have reasonably well paying jobs before Gilead is established. Offred talks about how people didn’t stand up against the regime until it was too late, including herself in this. Perhaps June would not have voted for Trump, but we have to remember that 52% of white women in America did. This statistic is even more relevant to the character of Serena Joy (Yvonne Strahovski) – a woman who was active in instigating the Republic, but is now reaping no benefits from it.

Middle-class white women have always been able to enjoy certain privileges whilst supporting or tolerating leaders who oppress more marginalised groups. It is, therefore, unsurprising that it is Moira, a lesbian woman of colour (WOC), who orchestrates her and Offred’s escape from the Rachel & Leah Centre (where the Handmaids are trained), it is Moira who scratches graffiti onto the bathroom stall and it is Moira who is the first to tell Luke (June’s husband, played by O-T Fagbenle) that maybe he is partly to blame for the state of things. The oppression of WOC has a long and horrifying history globally, and it is a history which traditionally white women have (at least in part) benefitted from. Moira’s race was not specified in Atwood’s novel (in fact, Gilead’s society was almost solely white), so the casting of Samira Wiley is a significant choice.

The world of The Handmaid’s Tale, though futuristic, is a terrifyingly tangible prospect. Particularly in the wake of Trump’s America, Gilead certainly feels closer than ever. It is also important to remember that for many women around the world, some elements of the story are frighteningly similar to their lived experiences, not just a dystopian idea. The series, so far at least, seems to be doing the novel justice, and let’s hope it can inspire us to make real change in the world we live in, rather than fearing for the future.

The Handmaid’s Tale is currently showing on Channel 4.

All images courtesy of Hulu, photo by George Kraychyk.
1. Feature image is a white, blue-eyed woman wearing a red cloak and white wings on her head is standing among the trees, looking off camera. It’s Elisabeth Moss as Offred.
2. A bird’s eye view of a grassy area, with rows of red pillows on the ground arranged as for the audience. Some figures wearing red cloaks and white wings on their heads are already standing in first two rows, others are approaching. There are figures wearing black uniforms guarding the scene behind the back row.
3. A white woman with shoulder length blonde hair, closed eyes and wearing an unbuttoned denim shirt takes a selfie of herself and a dark skinned man standing behind her and kissing her neck, they’re on the beach. It’s Elisabeth Moss as June and O-T Fagbenle as Luke, her husband.
4. A close-up of a darked-skinned woman with her head covered, backlit. It’s Samira Wiley as Moira.

Becky Kukla (@kuklamoo) works in TV by day and writes about films, television, feminism (for Bitch Flicks and Film Inquiry) and onscreen representation (on her own femphile.com) by night. Based in London, she also likes drinking gin and re-watching ‘The X Files’