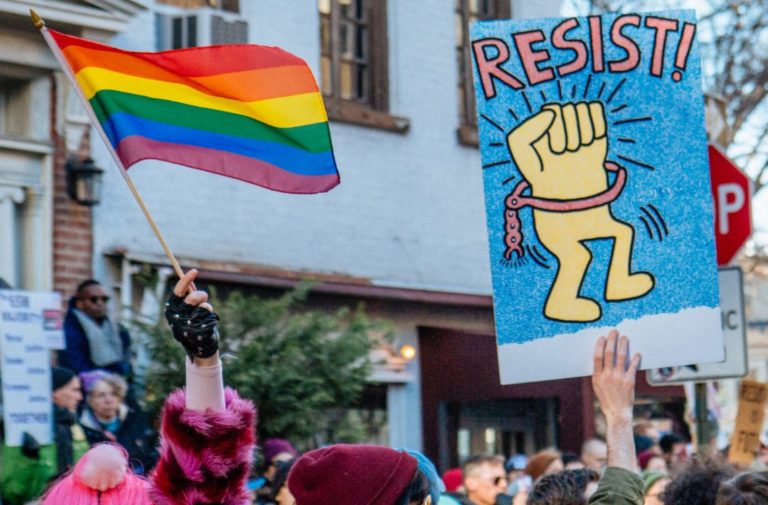 LGBT Solidarity Rally in front of the Stonewall Inn in solidarity with every immigrant, asylum seeker, refugee and every person impacted by Donald Trump's illegal, immoral, unconstitutional and un-American executive orders.

CN: for use of the ‘f’ slur and discussion of homophobia

Sexuality and labels have always had a complicated relationship. Claiming an identity for ourselves can be liberating, but labels can also be used to harass and bully the LGBTQ+ community. Maybe you were called a ‘faggot’ in the school halls, or you feel queasy every time someone describes something they hate as ‘so gay’. But now the concept of sexuality seems to be distancing itself from labels altogether. With over half of British young people not identifying as 100% heterosexual, more millennials are choosing not to label their sexuality and instead view it as something that can change. This idea of sexual fluidity has also been championed by celebrities such as Miley Cyrus, Cara Delevingne and Kristen Stewart. As new generations push back against traditional labels, what does it mean to be LGBTQ+ in 2017?

It’s almost a year since I came out as bisexual and even writing that I ‘came out’ sounds strange, purely because it just feels like an old-fashioned thing to do. When I did tell female friends that I was bi, they mainly responded by saying that they’ve also had attractions to women in the past, or could see themselves feeling that way in the future. The difference is that they wouldn’t choose to label themselves in the same way I did. I panicked that I had just made too much of a big deal about my sexuality and I shouldn’t have felt the need to label it, let alone tell people.

YouTuber NeonFiona, 24, also identifies as bisexual. She explained how, “some people find coming out to be incredibly difficult and after they get all that strength to tell people, it’s met with ‘who cares it’s 2017 and you’re not special’, which is awfully dismissive.” The reality is that being queer in 2017 is still a very personal experience. Though you’re part of a whole community, each person’s journey (excuse the X Factor cliché) to get to the point of identifying as L, G, B, T or Q, is different. Some people may just find labels constricting and dismiss them altogether, but the issue for those who want labels, myself included, is that calling yourself sexually fluid just feels like you’re not being honest with who you are. Because I’m not ‘sexually fluid’ – I’m bisexual. While I love being part of a generation that doesn’t feel the need for the rigidness of labels, there’s also a sense of liberation in being able to claim an identity that you were denied for so long – even one you once felt ashamed of.

For me, choosing a label felt like I was being honest with myself, but this isn’t the same for everyone. NeonFiona told me how, “labels can be so stressful and sometimes damaging and restrictive (as some people may have many labels throughout their life!) so the negativity associated isn’t something I’m a fan of. However, I love labels as a way for people to feel a sense of belonging.” It was finding this sense of belonging and honesty within myself that, in turn, influenced things I never thought it would, like my body image and mental health. No longer feeling like I was denying part of who I am, my relationship with food became much healthier and I became much more open about other areas of my life, simply because I had been able to be honest about this particular aspect of myself. I didn’t even realise coming out was the cause until recently, when I was chatting to my mum and tracing back the moment these things started to change for me. I realised that I shouldn’t have felt like coming out was an archaic thing to do as it was clearly important for me, even if other people thought it was a bit irrelevant.

Bisexuals are treated with mistrust for not being ‘gay enough’

I know I’m incredibly lucky to have such wonderful people in my life who wouldn’t have batted an eyelid if I went out with a guy one day and a girl the next, but not everyone has such a positive experience. The process of coming out for many can be extremely difficult and cause fractures in families and friendships; this is why labels still have an important role in being queer in modern Britain. They represent a shared difficulty, shared resilience and most importantly, a shared community.

This month’s Pride has shown me the value in that and especially the value in sharing a label with people who understand your experience. This doesn’t mean the community is all sunshine and rainbows – being gay in 2017 definitely throws up new challenges, even if straight people like to constantly tell you how easy it is now. Some of these problems are even created within the LGBTQ+ community itself. Bisexuals are often treated with mistrust for not being ‘gay enough’ and people who may be seen as acting more camp are dismissed for being too gay and just feeding the stereotype.

Labels become so powerful when used by the oppressed

NeonFiona said she found, “bi erasure and transphobia still run rampant, even within queer communities.” She has experienced this herself, telling me how, “I’m in a relationship with a trans girl and I’m constantly told I’m straight and dating a man which, [even] if I was dating a man, I would still be bi, but I’m not dating a man in the slightest.” Such prejudices run deep, with the community’s problems with racism being highlighted in the recent study by GMFA, the gay men’s sexual health charity, which found that more than seven out of every 10 black gay men have experienced racism in the LGBTQ+ community. With profiles on gay apps being found to say things like ‘No Blacks’, it’s obvious that my community still has its own issues that shouldn’t be brushed over. Considering we’re still facing so many external battles – NeonFiona is Australian and they haven’t legalized gay marriage there yet – we definitely shouldn’t also be fighting internal ones.

Choosing to call myself bisexual was necessary for my experience as an LGBTQ+ person. The only reason I would have chosen to call myself sexually fluid was because of the fear about judgments that would come from being openly queer. It’s a strange feeling knowing there are people out there who hate me when all they will ever know about me is my sexuality. Yet fear is the worst reason to shy away from a label. The rise of sexual fluidity is something I encourage – it’s great to see the idea of sexuality become much less rigid – but it shouldn’t be used to suggest we’re in a post-label society. Labels can become so powerful when used by the oppressed – just look at the way the word queer has been reclaimed by the LGBTQ+ community. We’ve fought and are still fighting for the space to be honest about exactly who we are without judgment and labels still play a huge role in owning that. How a person chooses to share their identity (or whether to share it at all) is entirely up to them. But I’m excited that a year after coming out, I’ll be celebrating by going to my first Pride, happily showing off my label for the whole world to see (even if I’m the only one watching).

Image credit: Taken by Mathias Wasik and shared under a Creative Commons license.
Image description: A group of people in winter clothes gathered to march, one waving a rainbow flag and another holding a sign that says ‘Resist’. The sign is a piece of Keith Haring artwork.