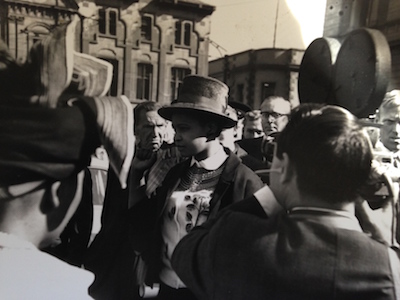 This year’s edition of Sheffield Doc/Fest (9-14 June 2017), UK’s biggest and longest running documentary film festival, can only be described as a feminist film editor’s wet dream. The festival opened with the world premiere of Queerama directed by British woman documentarian Daisy Asquith, a compilation documentary created from the riches of the British Film Institute (BFI) National Archive and which celebrates British gay, lesbian and queer characters on screen since 1919. The film was commissioned to mark 50 years since the Sexual Offences Act, which partially decriminalised ‘homosexual acts’ between men, and the festival programme featured numerous LGBTQ+ themed documentaries.

Besides films, in its Alternate Realities programme Sheffield Doc/Fest also showcases virtual reality (VR) projects for different platforms and as I sat down to make a list of women directors in both strands, I counted a staggering 94. Narrowed down to feature documentaries only, 38% (50 out of 130) of films had a woman as a director or co-director. The festival’s official report considers features and shorts together, showing that 46% of projects had a woman director (or co-director) and 51% a woman producer. Additionally, almost 50% of makers in the Alternate Realities programme and speakers during festival talks and sessions were women.

This abundance of women directors and producers (before one even considers all the amazing women and queer people on screen) means that any comprehensive roundup of women-directed and produced films is humanly impossible, and I couldn’t be happier about that. From my personal spreadsheet it is obvious that this year a Sheffield Doc/Fest viewer who chose to see only films directed (or co-directed) by women was spoilt for choice. Women-made films were both intimately personal and overtly political, traditionally observational and artfully constructed. As expected, there was a strong presence of films focussing on activists fighting for women’s rights (Jaha’s Promise, co-directed by Kate O’Callaghan, about Gambian anti-FGM activist Jaha Dukureh) and against systemic misogyny among geeks and gamers (world premiere of Gina Hara’s Geek Girls, inspired by the fallout after the infamous Gamergate controversy). While the latter fall under the rubric of traditionally feminist/activist concerns, films like Lea Glob and Mette Carla Albrechtsen’s Venus revisited the issue of women defining and redefining their sexuality on camera, while taking part in an audition for an erotic film based on their experiences.

There were portraits of women activists fighting for community or country-wide issues, directed both by women (international premiere of Aliki Saragas’ Strike a Rock, about two South African activists fighting for justice after the Marikana massacre) and men (most notably Dieudo Hamadi’s Mama Colonel set in the Democratic Republic of the Congo and Reber Dosky’s Radio Kobani focussing on a Kurdish radio activist in Syria). Some women filmmakers teamed up with men to take on men-dominated worlds of politics, war and terrorist attacks (world premiere of Geeta Gandbhir’s Armed With Faith, Tali Shemesh’s Death in the Terminal). American director Laura Poitras, whose film about Edward Snowden, Citizenfour, won the Oscar in 2015, was back with a new cut of Risk, a portrait of Julian Assange. The film’s decidedly feminist angle already met with Wikileaks’ legal team’s attempts to have it withdrawn from circulation. Keep your eyes peeled for this film in your local cinema’s listings; it’s definitely this summer’s hot ticket! My idiosyncratic choice of women-made films was influenced primarily by my research interest in UK-based women filmmakers. In the opening night screening of Daisy Asquith’s Queerama the soundtrack was as important as the images and especially the songs by John Grant, who graced us with a short live performance after the screening, which brought the BFI archive to life. Chavela, a tender portrait of Mexican ranchera singer Chavela Vargas by Catherine Gund and Daresha Kyi, seemed a natural follow-up to Daisy’s compilation. Beyond the obvious fact of music playing a central role in the singer’s biopic, the film also features Spanish film director Pedro Almodovar, whose admiration for Vargas’ led to him constructing the scenes in his films around her songs. Both Queerama and Chavela are a testament to a great deal of pain and sadness inherent in queer lives lived in traditional close-minded societies.

Following the work of Elhum Shakerifar, a prolific London-based documentary producer, I was encouraged to attend the screening of Kate McLarnon and Sky Neal’s Even When I Fall, which I am proud to have supported on Kickstarter last year. The film shows the lives of Nepalese young people, most prominently three young women, trafficked to Indian circuses as young children, subsequently freed as teenagers and brought back to Nepal. Strikingly, and against the dominant approaches both in the young women’s environment and in the western documentary-making world, the filmmakers do not show their subjects as victims but rather as strong survivors who take pride in their art. Rather than erasing their circus past as shameful, they use it to build a bright future for themselves as a community. Elhum also executive produced British director Carol Salter’s Almost Heaven (UK premiere in Sheffield), an observational coming of age story with a slightly morbid twist. Salter transports her audience to China as seventeen-year-old Ying Ling, sharing the plight of many Chinese teenagers, leaves her family home behind to pursue an apprenticeship in a large funeral home far away. Death is hanging in the air, contrasting with the freshness and liveliness of young employees who learn how to wash and massage dead bodies and how to deliver professional farewells to grieving family members. Salter, a white filmmaker applying her outsider’s gaze to Chinese society’s rituals around their dead, shared in a Q&A that not understanding Chinese seemed to work in her favour at times. Both the families of the dead and the morticians seemed relaxed during filming, and this is also evident in the scene when the funeral home’s senior employee tells off Ying Ling in front of the filmmaker who can only guess that something is wrong.

White American director Lana Wilson had a similar experience when filming a story about one Japanese man’s dealings with life and death, in her captivating The Departure which premiered in Tribeca Film Festival earlier this year (check out the trailer). Although she had local interpreters, most often she got her rushes translated into English only after coming back home. The extraordinary subject of her film is Buddhist priest Ittetsu Nemoto who counsels suicidal people, answering emails and phone calls from his clients 24/7, often to the detriment of his own health and family life (he has a wife and a young son). Wilson said that the participants of the workshops seemed more at ease after her Japanese assistants had left the room, as her and her camerawoman Emily Topper couldn’t understand their emotional utterances. During these “death workshops” people are asked to write down three things they imagine they will miss most after they die and then let go of them one by one, finally undergoing the film’s titular “departure”, lying on the floor in a position approximating being dead. They perform their own death as if to banish the temptation of effecting the actual one. Three other films I saw confirmed the diversity of international women documentarians’ interests and formal choices. French director’s Pascale Lamche’s Winnie, which won World Cinema Directing Award at Sundance, is a persuasive portrait of Winnie Mandela. Combining archival footage and contemporary interviews, including with Winnie herself, the film tells a story very different from the mainstream version of her involvement in the South African liberation movement. Do Donkeys Act?, co-directed by Ashley Sabin and her partner David Redmon, creates a genre of its own, an “ethno-poetic-animal-fiction” or what I would call a ‘donkey essay film’, casting animals from four donkey sanctuaries around the world as protagonists. Willem Dafoe’s narration moves between reading donkeys’ minds and more philosophical insights about life: or are they the same thing? Just like Andrea Luka Zimmerman’s Taskafa: Stories of the Street (2013) makes you consider street dogs with a fresh mindset, after Sabin’s film donkeys will never be the same. I ended my Sheffield adventure with conventionally observational Motherland by Asian-American director Ramona S. Diaz and it blew my mind. Set in the world’s (allegedly) busiest maternity ward of Dr Jose Fabella Memorial Hospital in Manila, Philippines, the film shows the audience life from the heart of this busy, ever changing community. In the predominantly Catholic country, women have children young and lots of them: the ward has about 100 births a day and we witness how the health professionals’ constant persuasive offers of long-term contraception are being rejected on religious or family grounds. Many of the women stay in the hospital longer, acting as human incubators for their premature babies, practising “Kangaroo Mother Care” in lieu of expensive medical equipment. Soon the apparent chaos of the ward starts making sense and the upbeat mood of the film allows the viewer to see the mothers as agents, despite their childbearing fate reinforced by poverty and religion. Motherland’s spatially confined narrative opens up to connect with the national or even global concerns as we see celebration of the birth of the 100,000,000th Filipino citizen in the ward in July 2014.

One of my festival highlights was African American director Yance Forde’s Strong Island and I will be writing more about it closer to its Netflix launch in September 2017.

My subjective report does not do justice to many documentaries I have missed or didn’t write about. As I said before, this is only a good thing: please check out gal-dem’s coverage of the festival, with Liv Little’s roundup of six docs worth seeing and Maria Cabrera’s review of Chavela.

If you’re based in London or visit sometimes, Bertha Doc/House in Bloomsbury will be showing many of festival documentaries in the coming months. Currently, Laura Poitras’ Risk is playing.

If you like documentaries, here’s our coverage of previous Sheffield Doc/Fests:

All images courtesy of Sheffield Doc/Fest.

1. A dark skinned woman wearing a black headscarf is standing on a busy pavement, looking off camera. She has a small nose earring and is wearing lipstick. There are people and cars behind her. It’s Jaha Dukureh, Gambian anti-FGM activist and it’s a still from Jaha’s Promise.

2. Black and white photo from 1926, titled “Hints and Hobbies” from BFI Collection. Two women with short hair are performing a routine where one of them, with her back to us, keeps her left arm bent behind her back and her right arm stretched up. The other woman, facing us, is holding the other’s hand in both her hands, with arms upwards. She’s looking up. The image was used in Queerama.

3. A young brown skinned woman, with her black hair in a bun on top of her head, is performing a headstand with her legs stretched like in splits. She’s wearing a patterned short sleeved top and patterned long loose-fitting trousers. She’s on a stone terrace or roof, with foggy mountain landscape in the background. It’s a still from Even When I Fall.

4. Black and white archive photograph. A smart dressed dark skinned woman, wearing a hat, is in the middle of crowd on the street. It’s Winnie Mandela and the image was used in Winnie.

5. A close-up of an old donkey who’s looking right off camera, standing on grass on a sunny day. It’s a still from Do Donkeys Act?

This post was amended on 4 October 2017 to include the link to The Departure’s official website and the trailer. – Ania